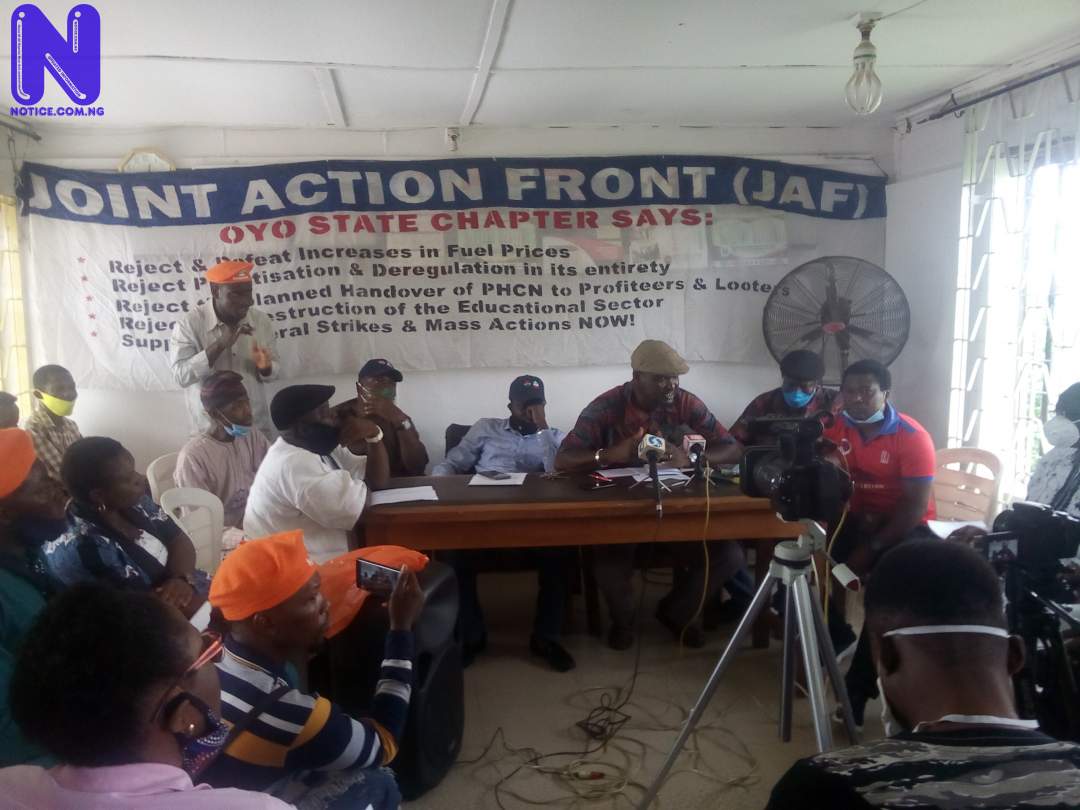 A civil society organisation, the Joint Action Front (JAF) in Oyo State has explained that President Muhammadu Buhari did not promise to increase the economic burden faced by Nigerian People while he was campaigning.
JAF noted this while addressing a press conference in Ibadan, the Oyo state capital, on the heels of the recent increments of petroleum price and electricity tariff.
JAF Coordinator, Professor Ademola Aremu, explained that the Buhari-led government had no plans to lift the economic burdens of Nigerian People when it took power in 2015.
Aremu while addressing journalists claimed Buhari has heightened the sufferings of Nigerian People, a situation that was not part of his campaign promises.
He said, “It is in the effort to continue to fulfil this historical responsibility that JAF condemns the recent hike in the pump price of petrol, electricity tariff, VAT as well as other anti-people policies of the Buhari-led government and calls on the Nigerian working people to resist the onslaughts until the total reversal is forced.
“To achieve this requires the general public to be sensitised on: reasons to organise a fight back; demands to be advanced in the course of it and; roles to be played by individuals to build mass support for the demands towards ensuring their actualisation. Hence, the focus of this press conference.
“In 2016, the Buhari-led government in less than a year in office hiked the pump price of petrol from #97 to #145. Unfortunately, there was little or no effort by the working people to resist the assault at that time. This attitude of the working people at that time no doubt emboldened the regime to increase its attacks on the mass of the working class. Unlike 2016, that the attack was only an increase in the price of petrol, this time around pump price of petrol was increased three times in less than three months’ side by side with hike in the electricity tariff and VAT while water wage bill is at the verge of being imposed on mass of the working people asides other anti- people policies under which poor continue to groan.
“We have to make a bold statement that “ENOUGH IS ENOUGH” to this government. We are no longer ready to be taken for a ride. We can do this only by giving the administration a serious fight back.
“This is not what the regime promised. The promise was to change from the old anti-people policies of the previous regime. With these barrage of hikes in public utilities it is very clear that the Buhari-led government is a deceit and has failed to keep to the promise he made to the Nigerian People.
Aremu, on behalf of JAC, in spite of that, called for total reversal of petroleum price, electricity tariff.
He added that Nigeria needs an alternative economic programme that will ensure the use of these resources for the benefit of all. This is socialism”.
“Total reversal of the hike in the price of petrol, electricity tariff and VAT at least to the pre 2016 prices. This means for instance that the pump price of petrol should be reversed to #87 per litre. Repair of all the old public refineries and build new ones under a democratic control and management of the working people.
”An end to various neoliberal policies like Deregulation, privatisation while the oil and power sector must be re-nationalised under a democratic control of the working people. Leadership of trade union centre, NLC and TUC must declare a 48hours nationwide strike and street protest to resist the hikes and demand a total reversal as well as an end to neoliberal policies.
“This is why fictitious or inflated contracts are awarded to cronies in the so-called private sector. It explains the jumbo pays, allowances and opulent lifestyles of political office holders. It explains why public education and health care are underfunded, and roads are in bad shape. As earlier stated, it is the reason for perennial increase in fuel price and poor electricity supply”.

DO YOU KNOW >>> El-Rufai accused of delay in naming new Emir of Zazzau, runs to Buhari - Kaduna

BREAKING >>> Why my friendship with Prince ended says Nengi - BBNaija 2020