You can’t threaten me, I’m not at your level says Wike fires back at Gov Umahi 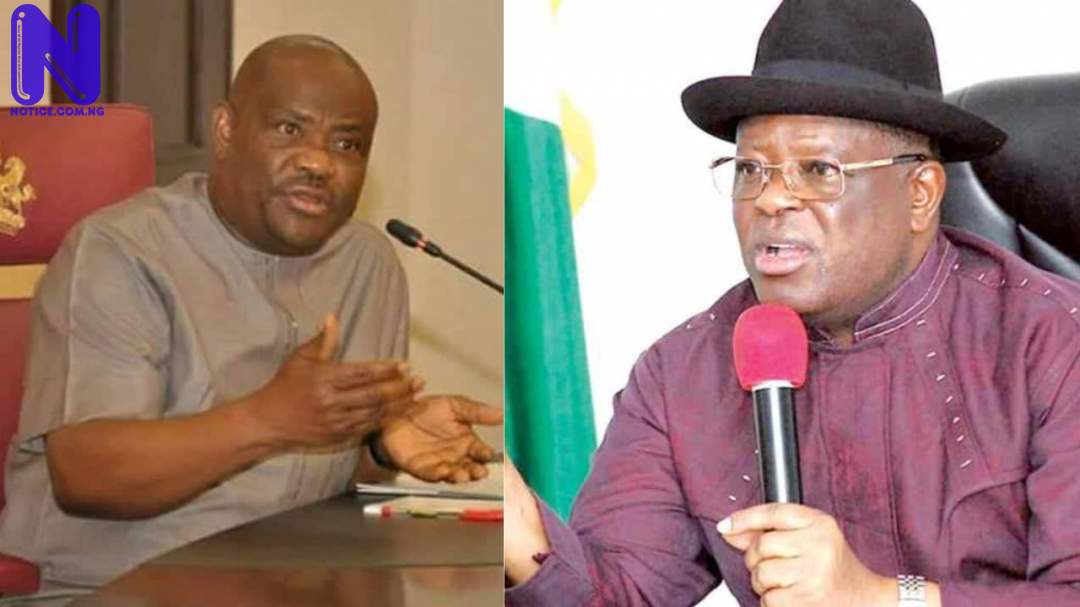 The Governor of Rivers State, Nyesom Wike, has responded to Governor of Ebonyi State, Dave Umahi’s earlier warning to him.
There have been exchanges of verbal blows between Wike and Umahi ever since the Ebonyi Governor announced his defection from the Peoples Democratic Party, PDP, to the All Progressives Congress, APC.
Umahi had during an interview on Wednesday warned Wike to focus on the party and stop demonstrating dictatorship traits by attacking him.
Umahi warned that it would be dangerous if they take on themselves, saying, “Wike has called the PDP committee all kinds of unprintable names, and I have asked Gov. Wike, he is my friend, and let’s not take on ourselves because it will be very dangerous.”
And appearing on Arise News on Wednesday, Wike said that Umahi cannot threaten him, adding that he (Umahi) knows him too well, adding that he is not at same level with his Ebonyi counterpart.
“Umahi cannot threaten me, he knows me too well. When the case of Edo State came up I stood firm and said we cannot go this way, if we go this way we will destroy our party and are bound to lose elections,” Wike said.
“It, therefore, requires everybody to sit together to agree, and when all of us agreed, we saw the success and that affected us in Ondo state because we could not agree.
“If you saw the way Umahi spoke earlier, you’d know he’s a man that things aren’t good with him now.
“I’m not at Umahi’s level. He said I single-handedly chose Secondus as PDP chairman. How could I? Secondus is from my state. I asked everyone to support him and everyone agreed, including Umahi.
“Umahi has the right to move to the APC, it’s his constitutional right, but we cannot in all cases allow Umahi blackmail PDP that made him chairman of the party, deputy governor, and governor and then you now realize there is an injustice against the southeast.
“All of us in PDP know the romance of Governor Umahi with the APC. We had a meeting and he came out to say he had an agreement with the president that he’d give the president 35 to 40 percent as the case may be.”