Why Nnamdi Kanu may not regain freedom under Buhari, get El-Zakzaki ‘treatment’ 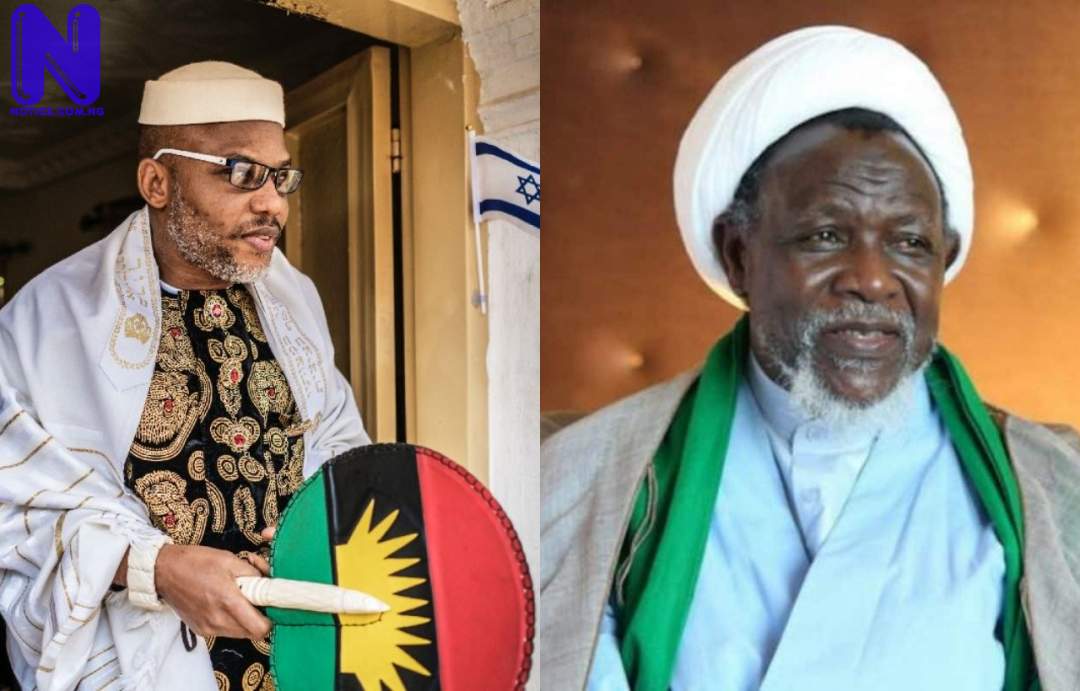 There are fears that Nnamdi Kanu, leader of the Indigenous People of Biafra, IPOB, may never regain freedom under the administration of President Muhammadu Buhari.

Kanu, the leader of IPOB has been leading the vanguard for the restoration of Biafra, in the past few years now.

The self-acclaimed IPOB leader with dual citizenship of Nigeria and Britain was first arrested in 2017 for agitating for Biafra’s actualisation and by extension Nigeria’s break up.

After much legal battles within several courts in Nigeria, the matter was transferred to Justice Binta Nyako of an Abuja Federal High Court, who later granted him bail.

Upon granting him bail, Kanu fled Nigeria to Israel before ending up in Europe, where he furthered his agitation for the restoration of Biafra.

But, a few weeks ago, the agitator was rearrested and repatriated from an undisclosed African country. And he has been in custody of the Department of State Security Services, DSS.

The Nigerian government had accused Kanu of inciting violence by allegedly ordering his followers to attack security operatives in the Southeast.

However, as his trial resumes on Monday, there are fears that Kanu may not regain his freedom and suffer the same fate of Ibraheem El-Zakzaky, leader of the Islamic Movement in Nigeria, IMN, who has been incarcerated for years now.

El-Zakzaky was arrested in December 2015 and has remained incarcerated. The IMN leader was arrested for allegedly attempting to assassinate the immediate past Chief of Army Staff, Lt. Gen. Tukur Butatai (rtd) in Zaria, Kaduna State.

El-Zakzaky’s followers had attacked Buratai’s convoy in Zaria. This led to the arrest of the Islamic leader after security forces stormed IMN’s headquarters.

Since his arrest, El-Zakzaky has not been released despite rulings by several courts.

Justice Kolawole also fined the Federal Government N50 million for the incarceration of the duo.

In 2019, a Kaduna State High Court granted El-Zakzaky and his wife bail on health grounds.

The couple were expected to visit Mandeta Hospital in New Delhi, India for treatment, but it never happened.

Despite the several bail granted the IMN leader, he is yet to be released by the relevant authorities.

However, there are fears that the same fate may befall Kanu, who may not test freedom, since he fled the country and abandoned his trial, the first time he was granted bail.

Speaking with Press, a constitutional lawyer, Barrister Uche Madu, said: “I may not like to predict the outcome, since the matter is before a court of law but Kanu may not regain freedom under Buhari’s government.

“Looking at the indications, Kanu may get El-Zakzaky’s treatment. The Shi’ite leader who is a Muslim and a Northerner has been incarcerated since 2015, is it Kanu an Igbo man from the Southeast that would regain freedom?

“Kanu should just forget freedom under this administration. The court may grant him another bail but will the Nigerian government release him? That is the question.

“Though, Kanu’s case is an interesting one because the international communities seem to be watching.”

However, Kanu’s lawyer, Aloy Ejimakor dismissed such, stressing that the case of the IPOB leader was different from that of El-Zakzaky.

Ejimakor stated that Kanu’s trial has a diplomatic angle which may lead to Britain’s involvement.

Speaking with Press, he said: “I doubt such will be the case. Unlike El-Zakzaky, Kanu's case has implicated international jurisdiction, particularly the jurisdictions of Britain and Kenya. What triggered these jurisdictions is the extraordinary rendition of Kanu which has destroyed Nigeria's exclusive jurisdiction.

“Further, apart from the new complications regarding jurisdiction, the dual nationality of Kanu would mean that Britain has an abiding interest in the matter, all to the extent that Kanu will ultimately be entitled to the full weight and credit of British diplomatic protection.”