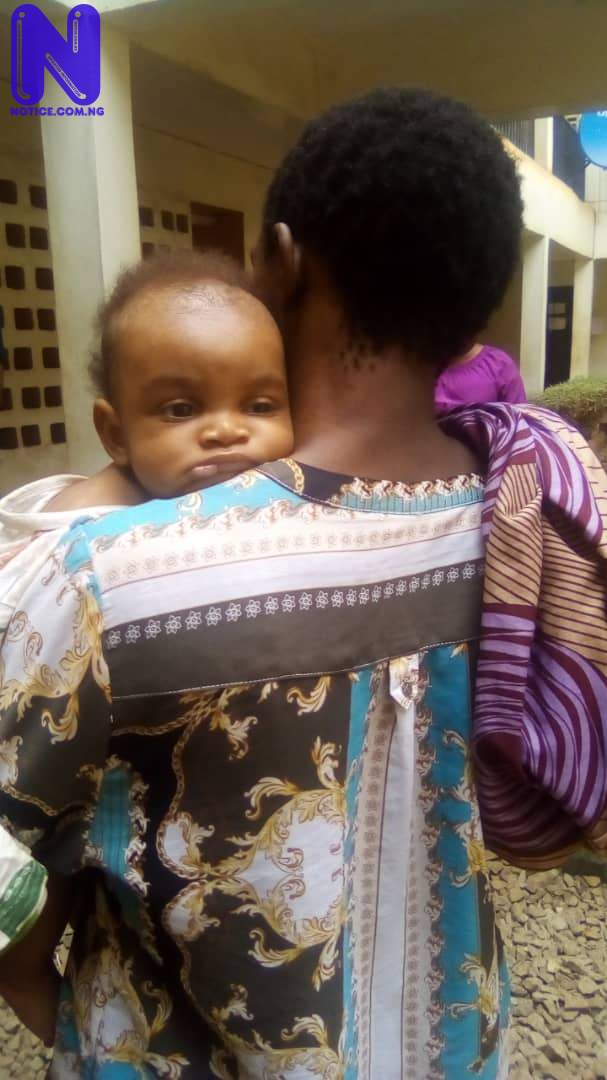 The Ebonyi State Police Command, Monday, held hostage a 32-year-old woman, one Victoria Chekwube for attempting to sell her four months old baby boy as a result of hunger and other economic hardship.
Victoria, As stated by investigation, was a commercial sex hawker.
It was gathered that Victoria was staying at the demolished market along the Ogbee Hausa axis, in the Abakaliki metropolis, where she became pregnant, for a yet-to-be-identified man.
Sources, who spoke to journalists on condition of anonymity, said she became homeless after the demolition of the market and wandered the area, begging for arms.
It was gathered that good spirited individuals, whom she approached and indicated her intent to sell her baby boy little Victus Chekwube, informed the police about her plan, which led to her arrest, thereafter.
Victoria said, “My name is Chekwube Victoria. I am 32 years old. I’m from Ebonyi State. I am a sex worker. I used to stay at Ogbe Hausa in Abakaliki here.
“One of my customers, who paid me N5,000.00, slept with me without condom and after that day, I missed my period. So, this is why I came to be in this condition. I am suffering and I’m even finding it hard to eat.
“This child, four-month-old Victus Chekwube, is my child. But I want to sell my child, because I cannot take care of him. I want to sell it for N40,000.00. I can’t guarantee the child’s safety, because I am suffering and I want to go look for my future.”
Confirming the incident, the Police Public Relations Officer in the state, Mrs Loveth Odah, said Chikwube’s situation was pathetic.
According to Odah, “This lady here, whose name is Victoria Chekwube, told us (the police) that she is a commercial sex worker. She said she doesn’t want to keep this baby (four-month-old Victus Chekwube), she is carrying.
“She told us that she is looking for anybody who can pay her N40,000.00 and then take the baby. She said she wants to open a beer parlour business, where she can earn a living from.
“She said she can not exactly say the particular customer that put her in the family way. She only told us that there was a particular day, that many customers were coming and she was charging them N1,500.00 with condom, and N5,000.00 without condom. And that after that day, she missed her period.
“All this while, we have been talking to her not to do something like this; but she is not willing to listen to us. We have tried talking to her to know the value of her own baby and the pride of womanhood. She refused.
“She even told us that the safety of the baby is not guaranteed of we allow her go home now, with the baby. Victoria told us that she would throw the baby away and then face her future.
“The Command has decided to take her to the Ebonyi State Ministry of Women Affairs and Social Development. We are sure they should understand how best to handle this kind of situation,” she noted.