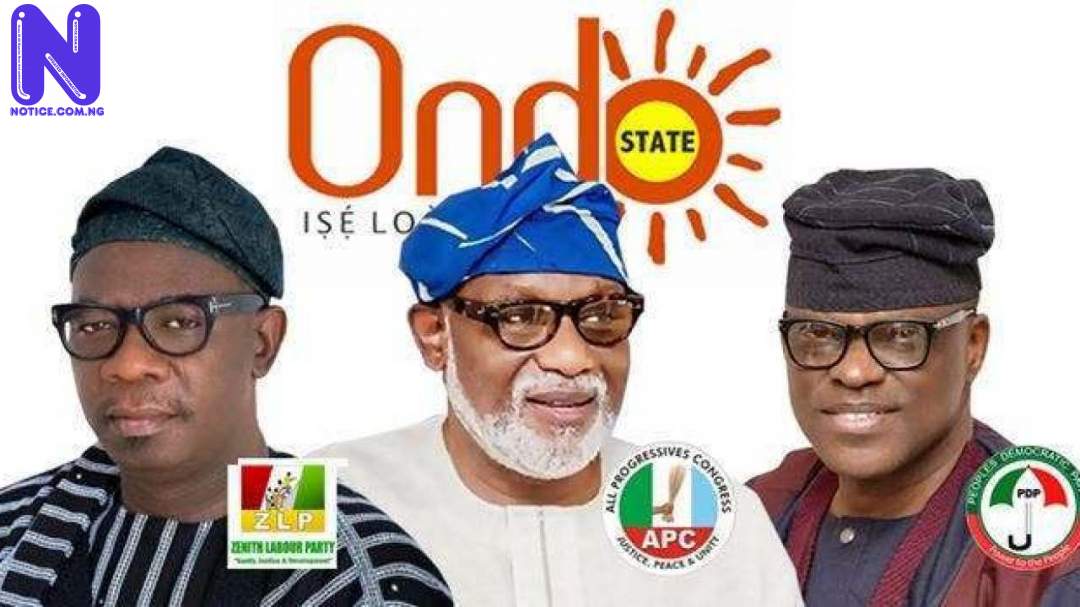 Following the conclusion of the Edo State governorship election where the incumbent governor, Godwin Obaseki was re-elected, Ondo State will no doubt be the next spot for political spectators and stakeholders as the governorship election in the state comes up on October 10, 2020.
With the political atmosphere of Ondo State already charged, headliners at the polls are Governor Oluwarotimii Akeredolu of the All Progressives Congress, APC, who is seeking re-election; the candidate of the Peoples Democratic Party, PDP, Eyitayo Jegede who lost to Akeredolu in 2016 as well a the Deputy Governor of the state, Agboola Ajayi who will be on the same ballot with his boss under the platform of Zenith Labour Party, ZLP.
During the forthcoming poll, the three frontline contenders will be representing each of the three senatorial districts, with Akeredolu from Ondo North, Jegede from the Central while Ajayi is from the Southern Senatorial district.
AKEREDOLU (APC)
Oluwarotimi Akeredolu who is the incumbent governor of Ondo State emerged at the political scene of the state in 2012 when he won the governorship ticket under defunct Action Congress of Nigeria, ACN which was part of the parties that metamorphosed into APC. Though, he lost to the immediate past governor of the state, Dr. Olusegun Mimiko in 2012, he recontested for the ticket in 2016 which he eventually won with his subsequent victory at the polls.
With Akeredolu’s eyes set on the forthcoming polls, internal factors within APC that could hinder his re-election had been resolved with a faction within the party in the state known as ‘Unity Forum’ which had vowed to work against him during the electoral process, agreeing to sheath the sword in order for the party to win at the polls.
With less hurdles before him, Akeredolu looks set and prepared to defeat the two other contestants during the election.
Apart from the power of incumbency, coupled with his financial wherewithal, one of the factors that will also aid the chances of Akeredolu in the contest will be the unwritten zoning arrangement of the politics of the state.
According to some political sentiments and narratives across the state, Akeredolu who hails from the Northern Senatorial district should be allowed to complete his eight years in office after his predecessor, Mimiko who is from the central had spent eight years.
Also, the infrastructural strides of Akeredolu in the state in the last three and half years will likely give him edge above his rivals.
But working against him, is his fight with his Deputy Governor, Ajayi Agboola, which has further divided stakeholders. The Agboola’s factor has further cast doubt on Akeredolu’s expected victory.
It’s also a popular notion among political stakeholders that Akeredolu is not carrying them along in the scheme of things. Some have, in spite of that, said that his hands are tight in relation to giving.
JEGEDE (PDP)
Just like Governor Akeredolu, the candidate of the PDP, Eyitayo Jegede is also a Senior Advocate of Nigeria.
Jegede who was the 2016 PDP governorship candidate came second at the polls after losing to Akeredolu.
According to political pundits, the scenario that played out in 2016 when it was argued that it’s not yet the turn of the Central Senatorial District to produce a governor might repeat itself again.
However, the people of Akure where Jegede hails from seem to be more committed to the ambition of their son eyeing the governorship seat, unlike in 2016 when they voted for Akeredolu as against their son with Jegede winning in two out of 18 local governments.
Also, shortly after the primaries of the PDP which was held on July 22, the party was hit with crisis following accusations that Jegede sidelined members and leaders of the party over his choice of running mate, particularly the muscling out of the incumbent Deputy Governor, Agboola Ajayi out of the party which was said to have forced Ajayi to join the Zenith Labour Party, ZLP.
With the development, most of the aspirants who contested alongside Jegede during the primary are no longer with him as some of them are either backing Akeredolu or Ajayi.
Among the PDP aspirants, only Jegede was from the Central Senatorial District while five were from the Southern Senatorial district with one from Ondo North.
Also, Jegede’s fallout with Mimiko who’s his political benefactor will no doubt affect his chances at the polls particular in the stronghold of Mimiko in Ondo West and Ondo East Local Governments which happened to be the only two council areas where Jegede won in 2016.
AJAYI (ZLP)
With the resolve of the Deputy Governor of Ondo State, Agboola Ajayi to contest the polls under the Zenith Labour Party, ZLP, political observers have described the move as an entrance of a third force into the governorship race.
Before joining ZLP, Ajayi had short foray in the PDP where he lost the party’s ticket to Jegede.
After his fallout with his boss, Governor Oluwarotimi Akeredolu, the deputy governor dumped APC following months of frosty relationship.
With his political experience, Ajayi will no doubt give both Governor Akeredolu and the PDP candidate a run for their money at the polls.
Following the move of Ajayi to ZLP, aggrieved APC members as well as those in the PDP were harvested into the fold of ZLP.
Among the three contestants, Ajayi is the most experienced politician going by his political background.
Looking at the profile of Ajayi, he started as political party’s secretary in his ward. Later, he became Supervisory Councillor and a Caretaker Chairman.
At a stage, he was the chairman of a party, later he became elected Chairman of the Council in 2004. In 2007, he was elected into the House of Representatives and in 2016, he was elected Deputy Governor.
Being from the Southern Senatorial district might also be an advantage for Ajayi during the polls as many had been advocating that it’s the turn of Ondo South to produce the next governor.