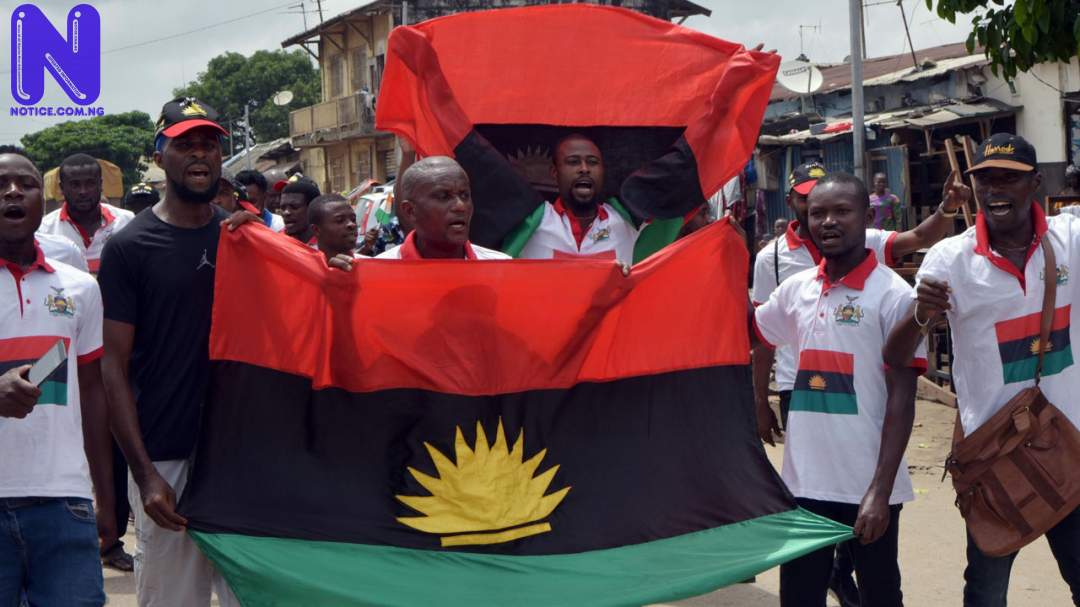 A founding member of the Movement for the Actualization of Sovereign State of Biafra, Mr. Ndubisi Igwekala, popularly known as Agu Biafra, has condemned the continuous attack on residents of South-East by those enforcing the Monday sit-at-home order.

Press reports that despite the calling off of the sit-at-home by the Indigenous People of Biafra, some elements claiming to be working for the group have continued to unleash mayhem on residents.

The IPOB leadership has earlier announced the setting up of a task force to deal with those behind the enforcement of what it called "non-existent sit-at-home order".

Addressing journalists in Enugu on Tuesday, Agu Biafra, who is the leader of the Biafra Warriors, said he was sad that the movement they started years ago had been infiltrated by some people who lacked vision except for using the agitation to make money.

He said he could not understand why anyone who called himself a member of the IPOB could not obey simple instruction from the command, stressing that he had doubts whether those behind the mayhem were actually Igbos.

"When we started this struggle, we had aims and objectives. One of the main aims is to protect the lives and properties of Biafran people anywhere they are. We were doing well until some of our people started misusing the opportunity.

"They started trying to enrich themselves with the struggle. They started to do things that are against the spirit of that struggle. You can remember that someone like Odumegwu Ojukwu, who is our father, made commitments to the struggle. I was with Col. Achuzie, I was with him and I learnt a lot from him. They started a project which they handed over to me. I need to have time to put those projects in order, so that I will not make the same mistake that other people have made.

"That is why I have not been very visible on the pages of newspapers but our network and our ground strategy have gone far. We have recruited our children and they were trained by Col. Achuzie before he died. He handed everything down to me. So I want to put all those things together so that we will not make mistakes."

When asked his thoughts about the current situation, he said, "I’m not comfortable with the state of affairs in the Biafran agitation. But on the other hand, I am happy because our people are now following. Before we were begging people to join and contribute to the struggle, but now they are doing so willingly.

"So it’s a great achievement but we should not misuse that confidence that they are reposing on us by behaving like hooligans and people who have lost control.

"We should be mindful of what we are doing and the way we speak and how to follow those people who are using their money to support this project. We must be very careful. We have come to protect and not to destroy. We must lead by example. I am not happy because some people are doing what they are not supposed to do in this struggle.

"Our mission is to protect the lives and property of Biafran. So how come we are destroying the properties of the same people we are supposed to protect? I am not part of it. Our security network is working underground to find out what is actually going on. Who are the people behind all these things?

"I promise you, if we find out the people that are doing these things we are going to deal with them and we are going to expose them. We cannot allow the blood of innocent Biafrans to be wasted. We are talking about the thousands of people that have died in the hands of our enemies and we now kill our own people.

"I don’t believe that Biafrans are doing this but if we find any Biafran, I’m telling you the spirit of this land will not allow them to go scot-free."

On the issue of the sit-at-home, Agu Biafra noted that "it was given when Nnamdi was not produced in court by security agencies. Some people became afraid that maybe one this or the other may have happened to him. This order was given by the DOS that there must be a sit-at-home home so that the federal government and the DSS will produce Nnamdi.

"Along the line, as people started sitting at home, the government was forced to allow the lawyer and the family of Nnamdi Kanu to visit him in court. The aim has been achieved. His family saw him and even the lawyer came out to say that Nnamdi was in high spirits even more than when he was arrested, which proves that Nnamdi is well and healthy. We have succeeded by seeing Nnamdi.

"So, we now issued an order again that the next sit-at-home will be on the day Nnamdi will go to court. In the military you obey the last order. You don’t need to question the order. In this struggle order has been given so you obey. If anyone has a complaint, he can channel it to the right place.

"We have given the order that on the 21st of October that Nnamdi will be taken to court, the whole Biafra land will be locked down so that the world will know that Nnamdi, who is our leader, is going to court, that's the only day for now.

"I think that anybody who is going about killing people, destroying INEC offices, that person is an enemy of Igbo nation and an enemy of Biafra. I am doubting that we are the ones burning those houses. We are not the ones doing those things, but if anyone is caught as a Biafran and he is part of it, I am saying that the law should take its full course because we are not here to destroy.

"I repeat, the sit-at-home is cancelled and suspended till 21st of October when Nnamdi will go to court and all of us will march to Abuja," he added.