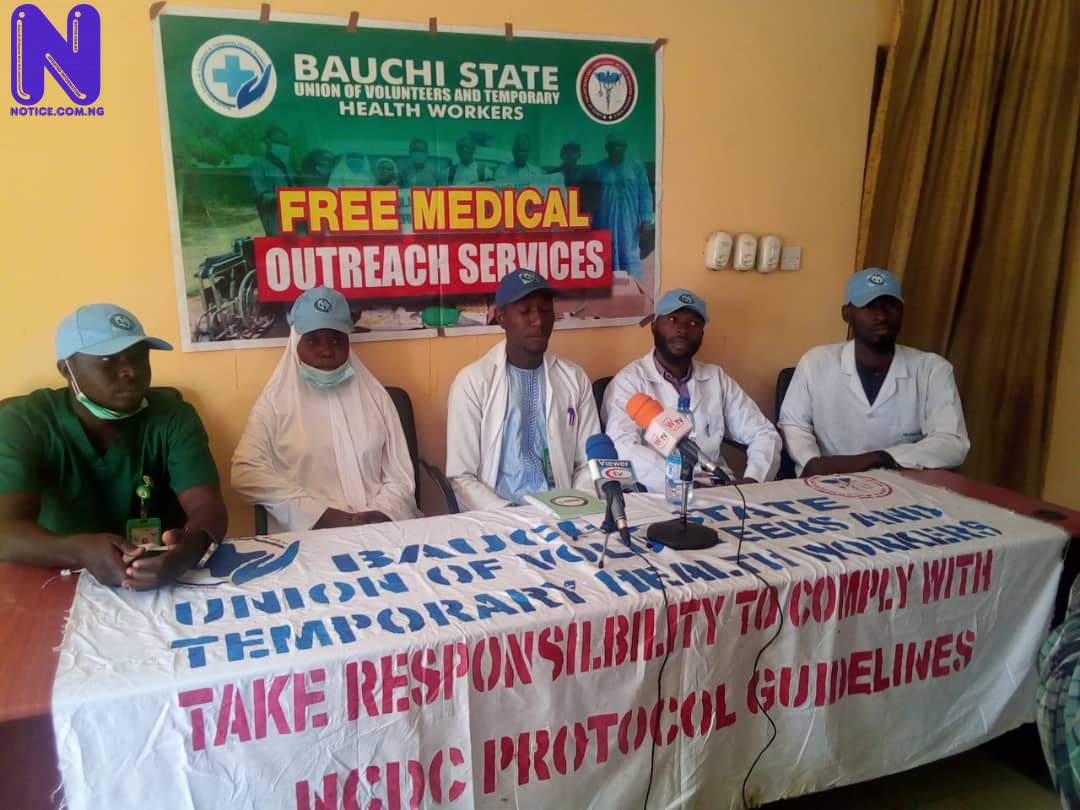 Volunteer health workers in Bauchi State on Tuesday issued a two-week ultimatum to the state government to offer them permanent appointment or they will be forced to withdraw their services in the 20 Local Government Areas of the state.

Addressing a press conference at the Cikin Fada Primary Health Care Centre in Bauchi, the chairman of the volunteers, numbering about 2,897, under the aegis of Bauchi State Union of Volunteers and Temporary Health Workers, Comrade Yusuf Aliyu Fada, lamented government’s nonchalant attitude towards their plights.

He alleged that over 100 healthcare facilities in the state are being headed by members of the union without being offered employment or paid monthly allowances for over a decade now.

Fada further alleged that despite being volunteers, they still raise funds among themselves to purchase medical consumables and drugs with a view to rendering free medical services in hard to reach areas of the state.

He said the health volunteers had been contributing to health delivery in the state, adding that they were involved in awareness campaign on COVID-19; enlightening people on compliance with National Centre for Disease Control (NCDC) protocol and guidelines on COVID-19, organising public lectures on the importance of COVID-19 vaccine, among others.

He lamented that despite bringing their plights to the attention of the state governor, Senator Bala Abdulkadir Mohammed and the assurance he gave, nothing has been done about them.

“During 2019 gubernatorial manifesto presentation held at DEC Conference Hall, GRA, Bauchi, we drew the attention of His Excellency, the governor of Bauchi State who was contesting for the seat of the governor to the plights of volunteer health workers in the state.

“We pleaded with him to intervene when he emerges as executive governor of Bauchi State. His reply was that he would casualise the service of volunteer health workers within his 100 days in office. When he became governor of the state, after one year in office, all the promises were not fulfilled,” Comrade Fada said.

He explained that this necessitated them to write letters to the governor, among other government officials without any positive responses.

“Our thinking was that hopefully if we reach the Government House protesting in large numbers, the governor will respond to our demands. We were well organised for the planned peaceful demonstration on the 2nd of March, 2020.

“But on 1st March, 2020, we received a call from the Chief Security Officer to the Government House drawing our attention to have a dialogue with the government at the Government House, Bauchi, around 8:30pm between our officials and the then Commissioner for Health, Dr Aliyu Maigoro.”

Fada declared that the volunteers had become hopeless with the current situation of things as government did not fulfil its promises to them.

“With all these promises made several times without keeping their words, we are becoming hopeless, especially considering the over 10 years without single official employment in the health sector, no replacement for over 10 years despite exodus of health workers through retirement every blessed month, increase in mortality rate recorded for many years, transfer of service and construction of over 150 new healthcare facilities within 10 years, without single employment,” he said.

Meanwhile, in a swift reaction, the state Commissioner for Health, Dr Samaila Dahuwa, explained that the state government was not unmindful of the volunteers’ plights and urged them to exercise patience.

According to the commissioner, the state government was looking into their plights with a view to employing them, declaring that they were making great contributions in the state’s health sector.

“They are volunteers, meaning they chose to volunteer, not that someone asked them to. in spite of that, they are making great contributions in the health sector in Bauchi State. Nobody would be happy to get to the point of lacking manpower to the extent that people will volunteer,” Dahuwa said.

While pleading with the volunteers not to withdraw their services, the commissioner explained that the plan was that the government would consider them first whenever it wants to employ health workers.

“Why volunteers are allowed to work is so that when the government wants to employ workers, they will have an edge and be considered first.

“We plead with them not to withdraw their services but they should continue since they volunteered. They should also know that the government is working on their issues and they will soon be addressed,” the commissioner pleaded.