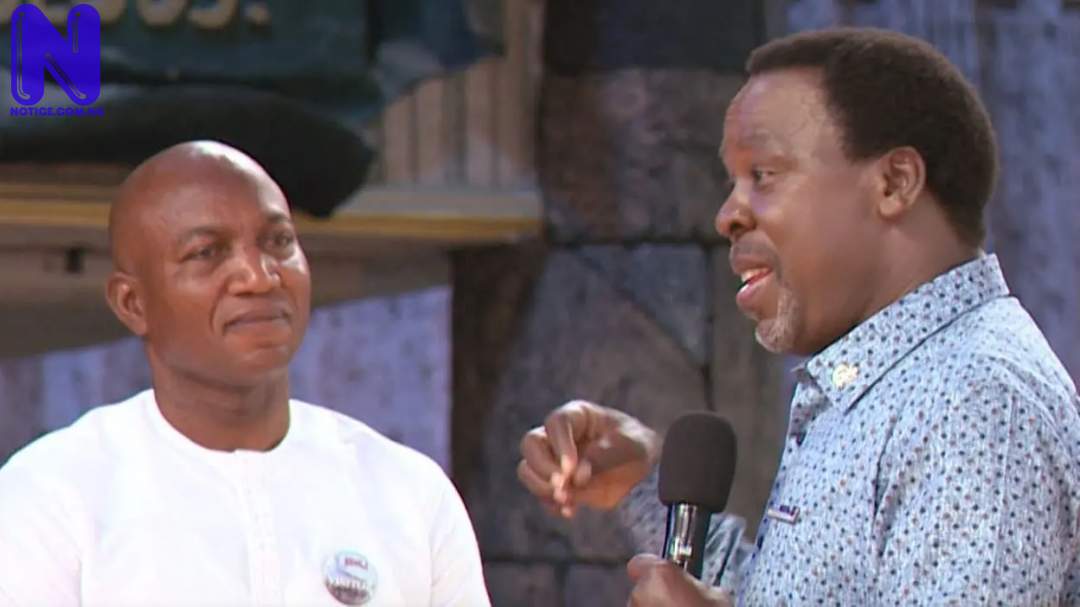 A video showing Prophet TB Joshua of the Synagogue Church Of All Nations (SCOAN) giving false hope to the sacked All Progressives Congress, APC, governorship candidate in Bayelsa, David Lyon, has resurfaced on social media.

T.B Joshua, who described Lyon as part of the brethren in his ministry, told him to go and prepare for his inauguration after which he would come and testify at the Synagogue.

in spite of that, In a unanimous judgment, a panel of justices led by Justice Mary Odili held that Lyon’s deputy, Degi-Eremieoyo presented a forged certificate to the Independent National Electoral Commission (INEC).

Lyon visited the church immediately after his victory at the November 16th, 2019 governorship election.

Joshua in service at the church’s headquarters in Lagos told the congregation that he was sure that Lyon was coming back for his testimony, asking the then governor-elect to make sure that he fulfills his promises to the people of Bayelsa.

Press reports that the judgment of the Supreme court on Thursday sacked the election of David Lyon before his inauguration.

“I am not going to say anything that the Spirit of God will not,” Joshua declared, explaining he is a believer in “Spirit-politics” and revealing he had an important message for Lyon to reflect on before his inauguration.

“For your information, this is not the time for testimony,” the cleric insisted, adding that such opportunity would arise after he was inaugurated.

“Going by the politics in the town today, I want my brother to know that the only way Bayelsa people will believe that he is the one they voted for is for him to meet the expectations of the Bayelsa people,” Joshua revealed.

The cleric then called on congregants to uphold the new governor-elect in prayers. “He is banking on your prayers because the best is yet to come,” he stated.

“My brother, I am at your service,” Joshua continued, speaking directly to Lyon concerningst rapturous applause from congregants. “When I say I am at his service, I mean I am at his service to see that the expectation of Bayelsa people is executed,” he clarified.