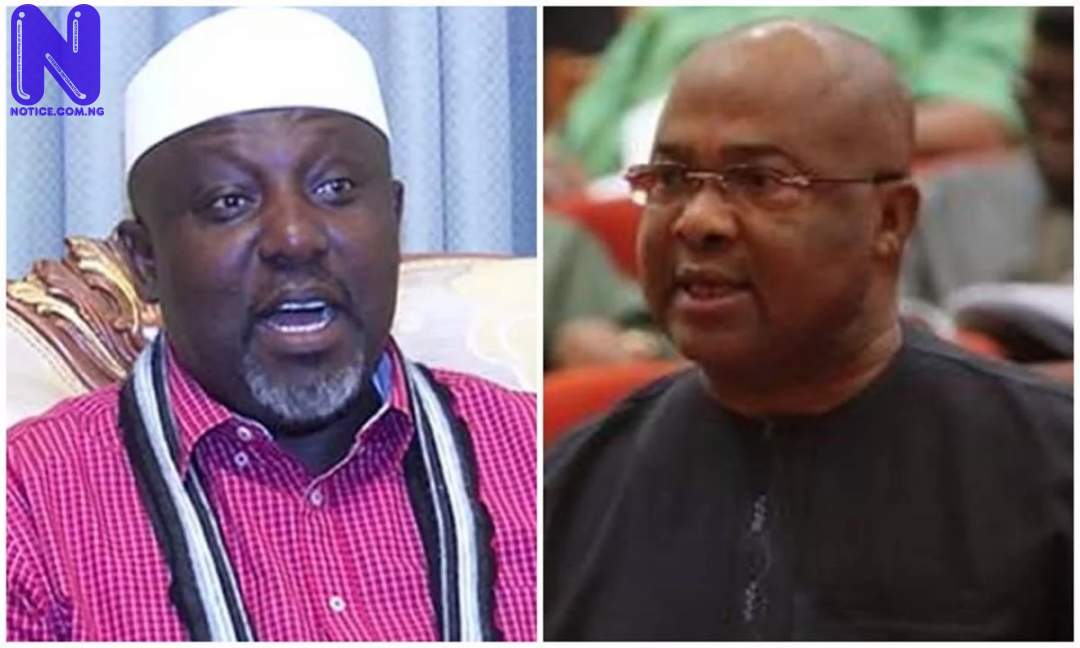 Ex-Imo State Governor, Rochas Okorocha, lambasted his predecessor, Hope Uzodinma, on Monday.
The Senator addressed a gathering over the Sunday drama in Owerri, the state capital.
Okorocha and some aides were arrested for unsealing the Royal Spring Palm Estate linked to his wife, Nkechi.
“A governor, who came through court, should know how to respect the rule of law. If a matter is in court, you cannot use executive power against the court power”, Okorocha said.
“But for the timely intervention of the presidency in this matter, Imo would have been something else. I want to thank the presidency and those who intervened. We shall resist those criminally governing this state.”
The lawmaker representing the Imo West, told his supporters to remain calm. He also warned Uzodinma to not see his peaceful disposition as weakness.
Okorocha said Uzodinma was moving in the wrong direction and might not end up well.
He described the Sunday event as a display of thuggery in governance and an attempt to create tension in the state.
“Imo today is very unsecure for the first time since nine years. When you go to Orlu, you see killings. Even the Air Force jet, for the first time in the history after the war, came to Orlu. Yesterday alone, 10 houses were burnt, at Ukwuta.
“Every day, people are being killed in this state; people are being intimidated by the governor and his thugs. He wants to make everybody to fear him. He has also introduced a law through the Imo State House of Assembly that empowers him to detain people at his will.”
Okorocha said Uzodinma has only achieved demolition of one thousand-bed hospital in Douglas Somto he built, the Tunnel at Port-Harcourt road and all the roundabouts that brought beauty and safety.
The Ex-presidential aspirant stated that the governor was yet to pay civil servants, teachers, pensioners, and he sacks workers and teachers at will.
Okorocha accused Uzodinma of unleashing the Economic and Financial Crimes Commission, and the Independent Corrupt Practices Commission against him for allegedly using state funds to build properties.
He pointed out that the state government had not been able to prove corruption allegations against him and family in court.
Okorocha urged the Inspector General of Police, IGP, Mohammed Adamu, probe the Government House officers that took him away and direct the arrest of Chinasa Nwaneri and Eric Uwakwe “who led the thugs”.
“Hope Uzodinma, Commissioner for Land went to that hotel which I requested my wife to come down home and invest for the purpose of creating jobs. I was never a poor man before I became governor of Imo state. I came here, brought my children to invest, brought everybody to invest.
“The amount of shooting that took place in that hotel was more than two hundred gunshots. Who are you shooting? Who do you want to kill? That is my question. Do you want to kill the citizens you are governing? That again is my question. Hope Uzodinma must be called to order.
“His thugs were shooting at us while Police officers from Government House were watching. I restrained my aides not to shoot because I hate to stain my hands with blood. Few days ago he went to Eastern Palm University and shut down the university where children are going to school.
“I have reported to all concerned. I have told them I am a man of peace. Hope Uzodinma should not take my calmness and peaceful disposition for granted. Enough is Enough. He has been arresting people and intimidating them. Some of them do not have a voice anymore.”
Video: https://www.facebook.com/watch/?v=138654348119845