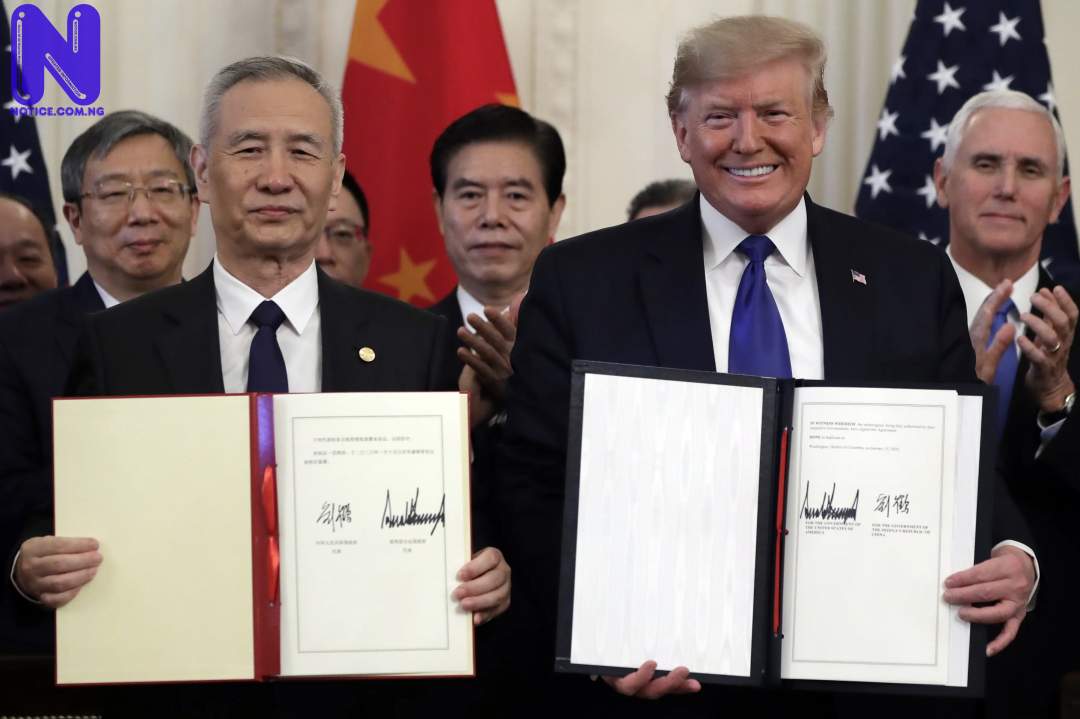 The U.S. and China signed a so-called ‘Phase One’ deal on Wednesday, thus putting on hold a trade war between the two economic giants but leaves in place massive tariffs on Beijing’s goods, while also sidestepping some of the thorniest issues.

The trade war has roiled world markets and slowed global growth over the past two years.

It also established a dispute resolution mechanism, which is meant to ensure the deal is enforceable, and provides further access to the Chinese market for U.S. financial service providers.

The U.S. said that if the sides could reach a more expansive Phase Two deal, Washington would roll back tariffs on hundreds of billions of dollars of Chinese imports.

The first phase leaves in place Washington’s tariffs on 370 billion dollars’ worth of Chinese imports, while reducing the tariff rate on some of those goods from 15 to 7.5 per cent.

“Keeping these two giant and powerful nations together in harmony is so important for the world.

“The world is watching today.

“Together, we are righting the wrongs of the past,” Trump said, while stressing that he viewed the remaining tariffs as a negotiating tool.

China will buy 40 billion dollars in U.S. agriculture products “in line with market terms,” Chinese Vice Premier Liu He said at the ceremony, while noting that demand would also be a factor.

Trump has made closing the large trade deficit between the U.S. and China one of the goals of his administration.

He also has sought an end to abuses of U.S. intellectual property rights by Chinese companies along with forced technology transfers.

“We are not likely to see in this agreement any provisions addressing the key structural problems with China,” Jennifer Hillman, a trade expert at the New York-based Council on Foreign Relations, warned ahead of the ceremony.

Hillman cited Beijing’s use of subsidies to “prop up” companies that flood markets with goods and drive down prices among the practices.

Chinese President Xi Jinping, who did not attend the event in Washington, praised the deal, in a letter read out by Liu.

“In the next step the two sides need to implement the agreement in real earnest and optimize its positive impact,” Xi said.

“In that spirit, I hope the U.S. side will treat fairly Chinese companies and their regular trade and investment activities,” the letter added.

Senate Democratic leader Chuck Schumer said on Wednesday, “(The deal) is an extreme disappointment to me and to millions and millions of Americans who want to see us make China play fair.”

Chinese observers also feel like the deal, while halting a trade conflict that was spiralling out of control, may fail to serve China’s national interests.

Beijing might also find it hard to purchase the set amounts of U.S. agricultural, energy, and manufactured goods outlined in the agreement without alienating other countries, said Shi Yinhong, a professor of international relations at Renmin University.

“I think China has made a lot of concessions, and the implementation of the first phase of the agreement poses a considerable challenge,” he said.

Other countries have raised objections to the deal, saying it would force China to adopt a system of “managed trade” to the detriment of other nations, As stated by Joerg Wuttke, president of the European Chamber of Commerce in China.