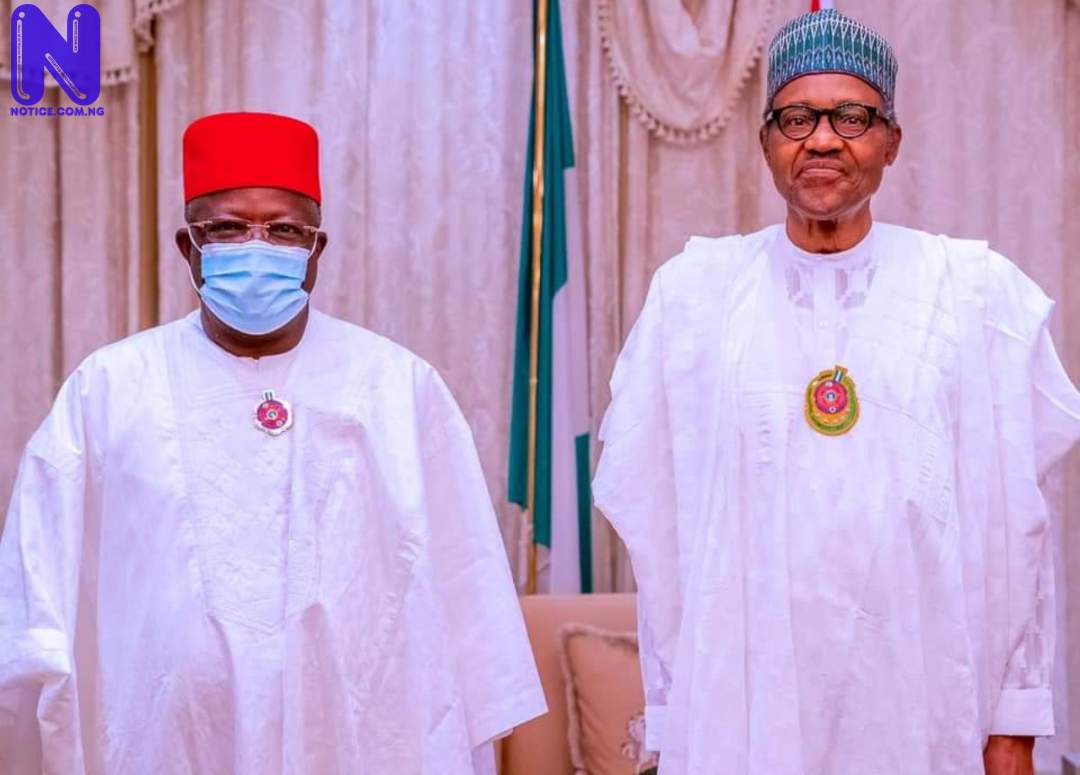 Ebonyi State Governor, David Umahi, met with President Muhammadu Buhari on Thursday.
Umahi was at the Presidential Villa with some All Progressives Congress (APC) stalwarts after announcing his exit from the Peoples Democratic Party(PDP).
APC Caretaker Chairman and Yobe State Governor, Mai Mala Buni formally presented him to Buhari.
In attendance were Ex-Senate President, Ken Nnamani, Govenors Atiku Bagudu (Kebbi), Badaru Abubakar (Jigawa), among others.
Hours earlier, the governor told his supporters not to castigate federal legislators and others who did not defect with him.
National Assembly members of Ebonyi origin had distanced themselves from his desertion.
In Abakaliki during his official declaration, Umahi stated that Ebonyi is now 99.9 per cent APC.
He said the remaining 0.1 percent are PDP and predicted that those still in the opposition will eventually decamp.
“Do not castigate them because they are looking for something and will come back when they get it. They are my children and I love them very much as the father of the state,” he said in reference to the lawmakers and other non-defectors.

The governor thanked his appointees and supporters for believing in him.
He said the path he chose was best for Ebonyi and the South-East zone.
Umahi boasted that APC now has the Deputy Governor, Speaker of the House of Assembly, 110 executive council members, 1,200 executive assistants, senior technical assistants and technical assistants and 374 LGA liaison officers.
“We also have 400 members of boards and commissions, 560 LGA management committee members, 130 LGA supervisors, the entire chairmen of the 13 LGAs, party chairmen in the councils, legislators among others in this movement,” he said.
Umahi further advised Igbo political stakeholders to join the APC, the party controlling the federal government.