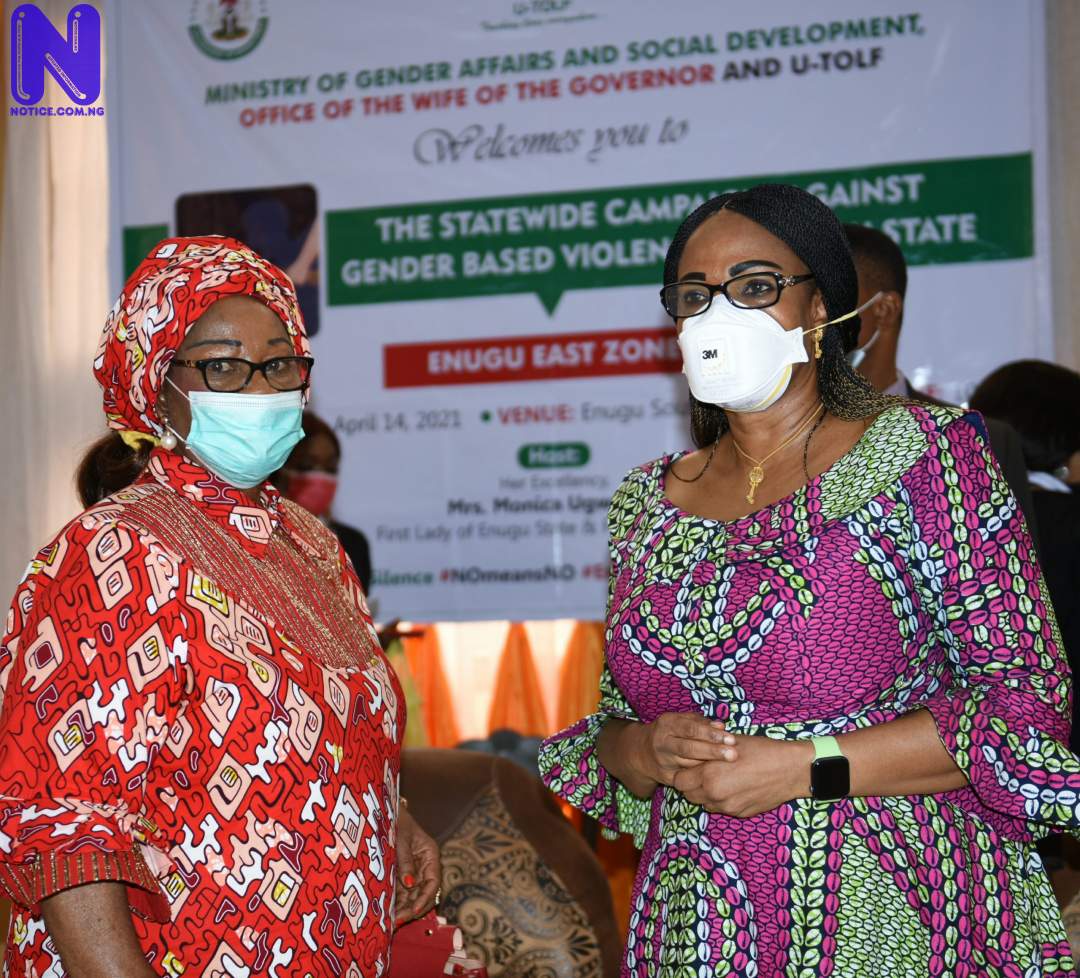 The wife of the Enugu State Governor, Mrs. Monica Ugochi Ugwuanyi, on Wednesday, rounded off her state and zonal campaigns against gender-based violence, calling for an all-inclusive and sustained crusade to stem the tide of domestic violence, sexual abuse, female genital mutilation, public harassment, among other forms of violence against women in the society.

Mrs. Ugwuanyi who also used the events to scale up awareness on yellow fever and the importance of the ongoing COVID-19 vaccination, described gender-based violence as barbaric and a violation of human rights.

Sensitizing women during the state flag off of the campaign against gender-based violence, held at Michael Okpara Square, Enugu, as well as the campaign in Enugu North, Enugu West and Enugu East senatorial districts, Mrs. Ugwuanyi lamented that the violent behaviour has eaten deep into the fabric of the society, adding that it cuts across most human societies, irrespective of gender.

According to her, “We know that not only women are victims of gender violence, some men are also beaten by their wives”.

The Enugu First Lady maintained that some children were being molested by their fathers and relatives and urged women to preach and sensitize the people against the ugly act.

She explained that the aim of the sensitization campaign was to enlighten the women of the three senatorial districts on the onerous task and counseled them to carry the crusade to churches, schools, families, workplaces, among others, stressing that women have the numerical strength to change the society for the better.

Mrs. Ugwuanyi equally harped on the importance of the ongoing COVID-19 vaccination and charged women to drive the campaign for the public to get vaccinated as a sure way of containing the pandemic.

Advising women to be respectful and avoid things that could trigger violence, the governor’s wife encouraged them to involve themselves in politics narrating that they have a lot to achieve if they unite and speak in unison.

“Let us come together and speak with one voice. We have the numerical strength, we can vote in our members provided we are united”, she said.

Also speaking, a Consultant, Public Health Physician, University of Nigeria Teaching Hospital, Dr. Nwachukwu Ugwunna, who delivered a lecture on “The Current Wave of COVID-19 and Necessary Containment Measures”, revealed that the last COVID-19 lockdown created ample opportunity for people to assess the level of gender-based violence among families and the society at large.

Dr. Ugwunna maintained that the poverty and frustration engendered by the last the lockdown skyrocketed the level of gender violence within the family level.

“You know that the last COVD-19 lockdown brought poverty, frustration among families, unlike what it was where in the morning family members move to their different businesses and schools, this time family members did not go anywhere from morning till night, hunger, poverty became prevalent thereby resulting to violence”.

In his lecture on “Yellow Fever Symptoms, Prevention and Vaccination”, the Deputy Incident Manager, Emergency Operations Centre, Enugu State Ministry of Health, Dr. Uchechukwu Joel Okenwa, spoke on measures of checking the spate of the epidemic among the people.

Dr. Okenwa stated that yellow fever has claimed many lives in the society and urged the people to avoid anything that will make them prone to the disease, which he said, is caused by a particular species of night mosquito.

He therefore enjoined the people to keep their environment clean, clean gutters, stagnant water, wear long-sleeves and vaccinate themselves to check yellow fever, stating that there is currently no medicine for the disease.

Chairmen of Local Government Councils, their wives and other top government functionaries also attended the events, which were powered by the Enugu State Ministry of Gender Affairs and Social Development, Office of the Wife of the Governor and the governor’s wife’s pet project, Ugo’s Touch of Life Foundation (U-TOLF).