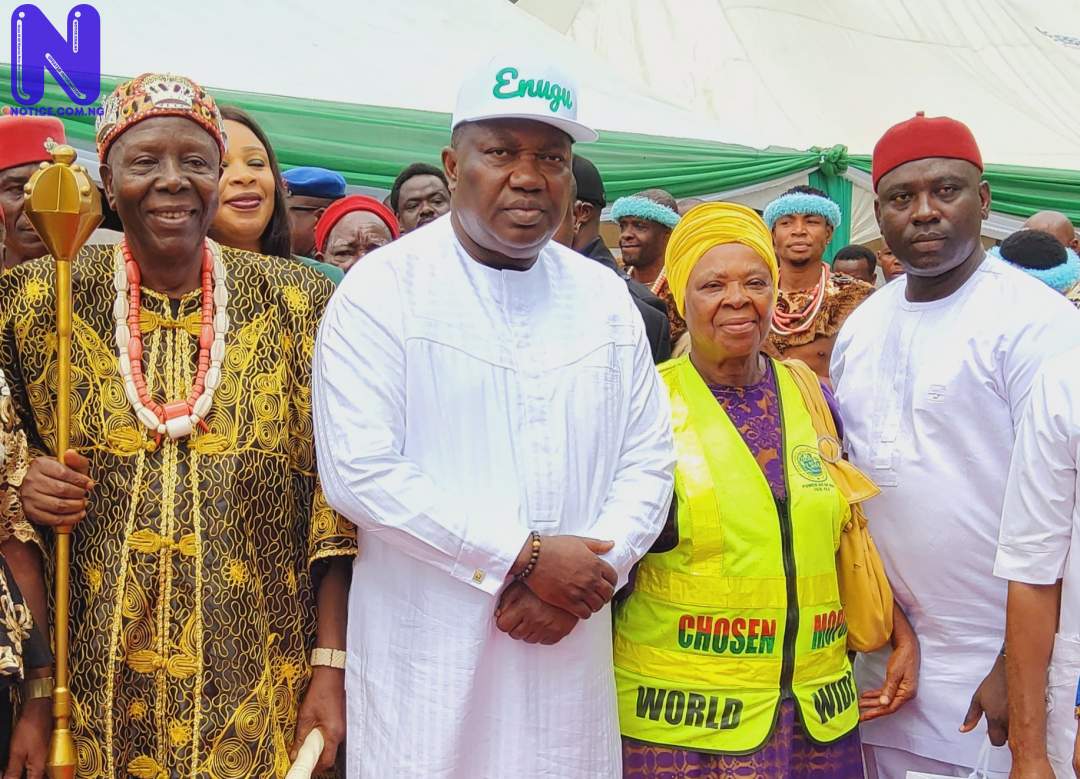 Engulfed with joy, the people of Imeama-Umuabi Autonomous Community in Udi Local Government Area of Enugu State, on Sunday, paid a Thank-you visit to Governor Ifeanyi Ugwuanyi for restoring peace in their community after two decades of crisis.

Led by the Traditional Ruler of Imeama-Umuabi Autonomous Community, HRH, Igwe Justice F. Ken Ezeike, the people expressed profound appreciation to Gov. Ugwuanyi for salvaging them and bringing peace and succour to them through the creation of the autonomous community.

They also appreciated Gov. Ugwuanyi for the emergence of Igwe Justice Ezeike as the Traditional Ruler of the newly created autonomous community as well as the appointment of the Monarch as the Chairman of Traditional Rulers Council, Udi Local Government Area.

Speaking, Igwe Ezeike stressed that Gov. Ugwuanyi's intervention did not only bring peace to their community but also opened the door for development and progress.

He added that what the governor did for them was divine, disclosing that since he resolved the crisis at its peak, the people of Imeama-Umuabi Autonomous Community have been living in peace and harmony.

The Royal Father, therefore, prayed God to bless Gov. Ugwuanyi and bestow him and his family with peace "the way our governor gave us peace".

In a similar development, the people of Awgu Egbeleri Community in Awgu LGA also visited Gov. Ugwuanyi at the Government House, Enugu to thank him for the appointment of their illustrious son, Professor Aloysius Okolie, as the new Vice Chancellor of Enugu State University of Science and Technology (ESUT).

Led by the Chairman of Awgu LGA, Hon. Pedro Okwudili Nwankwo, who is from Awgu Egbeleri Community, the Chief Whip of the State House of Assembly and Member representing Awgu North Constituency, Hon. Mrs. Jane Eneh, his Awgu South counterpart, Hon. Johnson Chukwuobasi and the Commissioner for Culture and Tourism, Hon. Ugonna Ibe, the jubilant people of the community described the appointment as a well deserved gift to them.

The people of Awgu Egbeleri equally thanked Gov. Ugwuanyi for his administration's interventions in their community in terms of development, security, political appointments and elective offices, after being neglected in the past, in spite of their voting population in Awgu LGA.

They thanked Gov. Ugwuanyi for massive works his administration did at the General Hospital Awgu and the School of Midwifery, Awgu, which they said was hitherto moribund for over 20 years.

The people went further to express gratitude to Gov. Ugwuanyi for the re-election of the illustrious son, Hon. Nwankwo, as the Chairman of Awgu LGA, after serving as Transition Committee Chairman of the council, pointing out that the governor has liberated them from "oppression and suppression".

They reassured Gov. Ugwuanyi of their unalloyed loyalty and support, stressing that they will continue to follow and appreciate him even after he leaves office as governor.

In their separate speeches, the Chairman of Awgu LGA, Hon. Nwankwo, Chief Francis Nwobi, Professor Peter Nkwo, who spoke on behalf of the academia, Ex-member of the State House of Assembly, Rt. Hon. Nelson Uduji, Hon. Joe Ani, the Commissioner for Culture and Tourism, Hon. Ibe and ESUT VC, Professor Okolie, all spoke in the same direction thanking Gov. Ugwuanyi for his love for their community and reiterated their support and loyalty to him even after he leaves as Governor of Enugu State.

On their part, other speakers from Imeama-Umuabi Autonomous Community, Udi LGA applauded Gov. Ugwuanyi for his peace initiative in their community as well as the emergence of their illustrious son, Hon. Okey Aneke, as the Peoples Democratic Party (PDP) Candidate for Udi South Constituency in the forthcoming general elections.

The President General of the community, Hon. Daniel Eneaniofu described Gov. Ugwuanyi as an icon of peace, stating that they are proud of him.

His words: "May God bless and protect you as you transcend from this reign to another position. We pray for God's protection, we pray for long life for you and may God continue to make you strong and grow from age to age".

Speaking on behalf of the women, a retired Permanent Secretary, Mrs. Chika Nebo said: "I want to appreciate you sir for this wonderful gesture you did to us. You can never imagine what you did. How you rescued us. How you brought peace. How you brought succor. How you came and salvaged us from the 20 years old running battle.

"It can only be God. There is nothing we will do here that is comparable to what you have done for our community. We gathered as a people to say thank you very much sir".

Appreciating Gov. Ugwuanyi for the appointment of their Monarch, Igwe Ezeike, as the Chairman of Udi Traditional Rulers Council, less than one year in office, and Hon. Aneke's emergence as PDP candidate for Udi South Constituency, Barr. Tony Agu said: "Whoever that wants peace will receive peace. When someone wants others to have peace, he also will have peace. So what we have is prayer; when he (Ugwuanyi) goes to another place, God will be with him".