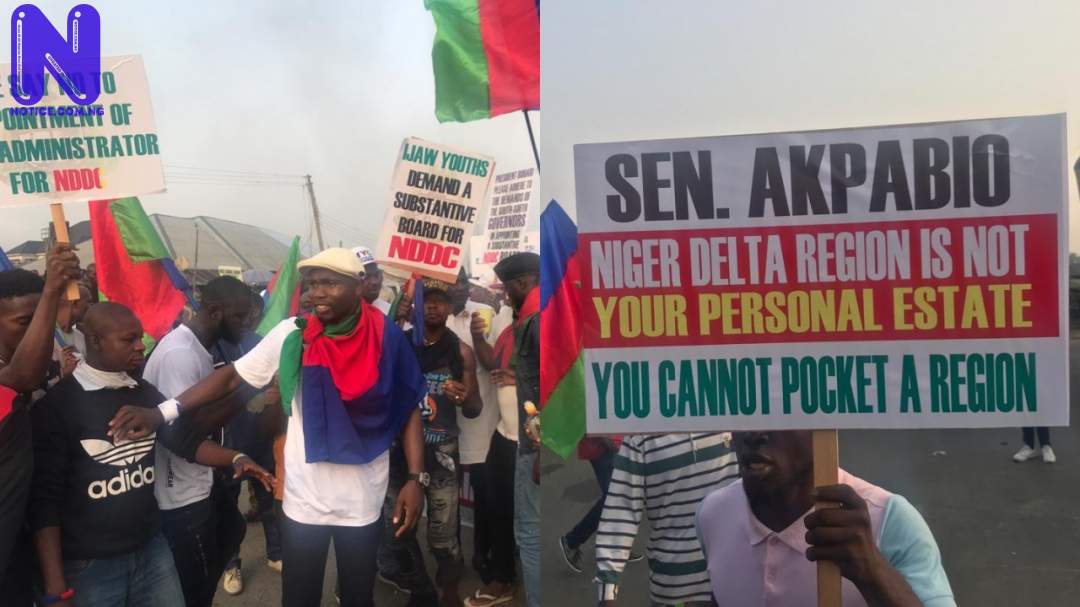 Hundreds of travelers, and other road users were on Monday morning stranded along the East-West road for several hours following protest by angry Ijaw youths over the appointment Of Okon-Awka as NDDC Sole Administrator, by President Muhammadu Buhari.
The protesting youths, who arrived the Mbiama axis of the East-West road at about 6.30am in protest against the appointment of Effiong Okon-Akwa, as the Interim Administrator of the Niger Delta Development Commission, NDDC, blocked the two lanes of the road, and were seen chanting war songs.
They also warned the Minister for Niger Delta affairs, Senator Godswill Akpabio, over alleged interference with issues concerning the Niger Delta Development Commission (NDDC).
The aggrieved youths were with placards, inscribed wuth “Akpabio focus on your Ministry and leave NDDC alone, Ijaw youths demand a substantive board for NDDC, Say no to appointment of administrator for NDDC”.
Recall that the appointment of Mr. Effiong Okon Akwa, that was announced last week, had provoked anger and controversies among stakeholders and youths from the region, who demanded the setting up of a substantive management board for the region.
Mr. Effiong Okon Akwa was the Ag. Executive Director, Finance and Administration of the Commission, a Fellow of the Institute of Chartered Accountants, and a Solicitor of the Supreme Court of Nigeria before his appointment.
The protest on Monday, led by Ebilade Ekerefe, Spokesman of IYC, the Chairman of the Central Zone of IYC, Comrade Inodu Clever and Treasurer of IYC, accused the Minister of Niger Delta, Godswill Akpabio of pocketing the region and playing politics with NDDC, thereby undermining the region’s development for selfish gains.
Comrade Ebilade said, “Niger Delta is not your personal estate; you cannot pocket a region. We say no to the appointment of a sole administrator. Sole administrator is alien to NDDC act”.