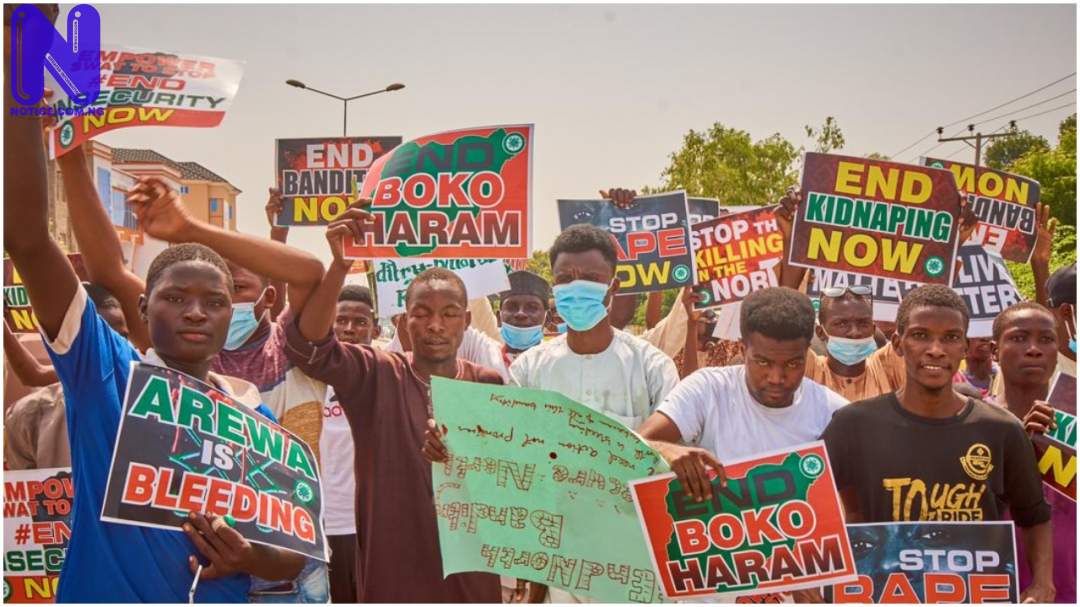 Armed thugs on Thursday chased away hundreds of anti-insecurity protesters in Kano.
The Protest organized across the Northern states by the Coalition of Northern Groups (CNG) against the lingering insecurity challenges bedeviling the north, couldn’t go far as the heavily armed thugs launched an attack on them.
CNG gathered along Bayero University, Kano road to proceed with the protest, but some hoodlums descended on them, beating and snatching their phones until they took to their hills for safety.
A member of the group, Usaini Adamu narrated that the thugs, brandishing dangerous weapons invaded the gathering, opposite BUK old campus and started attacking tmembers of the CNG.
Though, As stated by Adamu, no casualty in the attack, but a few of the members had sustained minor injuries, adding that they were saved by the prompt intervention of security agents.
“Only a few of us sustained some minor injuries because security operatives promptly intervened and dispersed them.
“We were grouping here, suddenly these thugs descended on us and started beating us. Most of us scampered for safety while some of us resisted until security agents arrived and dispersed them.
“Now the security agents have given us a cover to read our press statement and leave,” said Adamu.
In a released signed by the CNG’s spokesman, Abdul-Azeez Suleiman and circulated across the North, the group said the aim was to show concern for deteriorating national security and other pressing issues.
According to CNG, it decided to stage the protest to express concern on the dwindling economy, prohibitive commodity prices, rising inflation concerning mounting poverty and prolonged stay at home by university students.
The group also expressed sadness about how northern leaders and politicians had neglected the region and its population, while the southern leaders help their people at the time of need.
“That while the southern elected and appointed leaders and representatives are quick to identify with their people at the time of need, their counterparts from the North, including the President, the Senate President, Senators, Rep members, governors, state legislators and other government appointees would rather abandon the hundreds of thousands of people in northern communities exposed to crime, lawlessness and insecurity in the hands of bandits, insurgents, kidnappers, rapists rustlers, and other violent criminals without any form of protection.
“That it is contradictory that despite several protests and pleas by northerners, the authorities never deemed it fit to extend the swift spirit deployed against FSARS into securing the North, or addressing the myriad distresses faced by northerners.
“That the authorities appear bent on sustaining the harsh, unacceptable regime of exploitative hikes in electricity tariffs for which the North shall bear the brunt more than other parts of the country. That the federal government appears not keen on resolving the lingering dispute with the Academic Staff Union to enable the recommencement of university education,” said CNG.
While calling on all its northern chapters to embark on the protests, CNG also called on the federal government to immediately declare a state of emergency on security and take practical steps to end all manifestations of insecurity in northern Nigeria and other parts of the country.
“We demand thorough reorientation of the entire police force and its empowerment by way of additional personnel, modern training and adequate equipment to be able to reclaim its universal internal security function.
” We would mount pressure on leaders to show real commitment to protecting lives of citizens, ending the prolonged closure of our universities, reconsidering hiked commodity prices, reducing youth unemployment, and checking the rise in poverty level.
“We publicly condemn and pass a vote of no confidence on those office holders and elected leaders who have abandoned the bulk of northerners to the mercy of a vicious insurgency, destructive banditry, rape and sexual assaults, violent communal clashes amidst mounting poverty and entrenched fear of widespread kidnappings for ransom.
“We call on the federal government to declare the agreement reached by labour with the government on new electricity tariff unacceptable and demand the immediate and unconditional reversal to the old rates,” CNG stated.
While welcoming the creation of the SWAT to replace SARS, CNG also called for expeditious action for the improvement of the professionalism of the personnel to be drafted through reinforcement, retraining, equipment update and improved welfare.