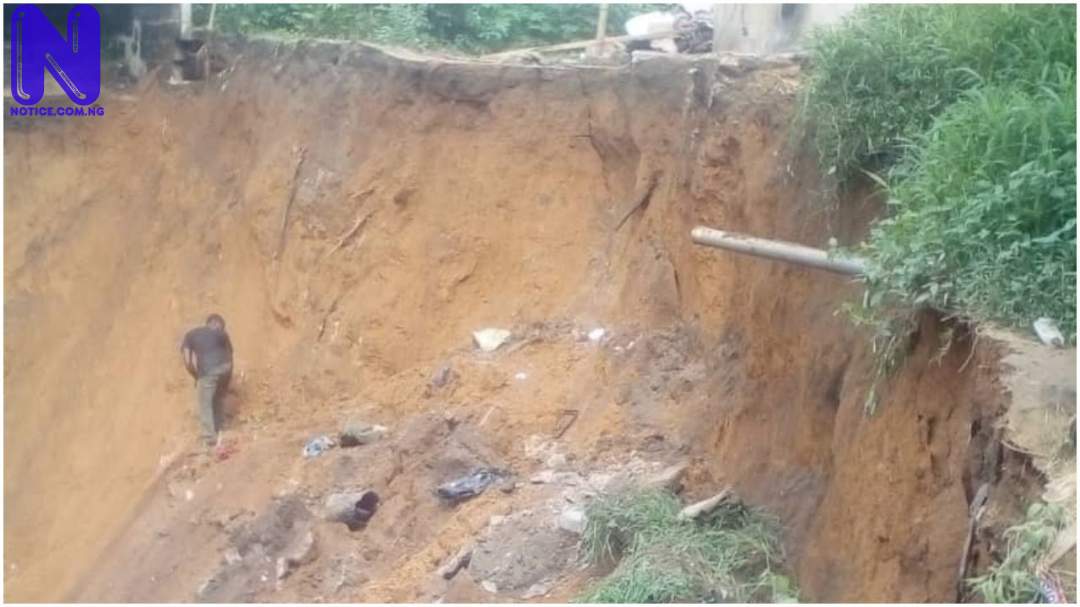 Three siblings, Aisha 9, Yusuf 6 and Fatima Ibrahim 5 on Sunday escaped death following a landslide which occurred in their residence at 16 Asutan Street, Uyo Akwa Ibom State capital.
It was gathered that a few minutes after the kids finished preparing their evening meal, left the kitchen to eat inside the house, the kitchen collapsed and sunk into the river.
The landlord of the affected building Francis Ikpe, described the escape of the kids as a miracle while describing the incident as devastating.
According to him, “It was a devastating experience. Three children were preparing their meals in the kitchen. After they left the kitchen, it was not even up to five minutes, when the kitchen collapsed. The children were eating when suddenly there was a bang and the kitchen and everything inside was buried. They would have been trapped; it was a miracle”.
The landlord said the community had been living with the erosion for the past 30 years, adding that it has not been as disastrous as it is now.
He said the problem became serious when the State government decided to embark on street repairs and construction of drainages, saying water from six adjoining streets had been channelled to the place without a chamber constructed to receive the volume of water.
“A lot of damage has been caused to that place. Whenever it rains the volume of water increases and this has been posing threats to lives and properties” he said.
He called on the state government to intervene before the house is completely swallowed by the rampaging slide.
However, when the Commissioner for Environment and Petroleum Resources, Mr Charles Udoh who visited the erosion site said the government is doing everything possible to mitigate the impact of the erosion in the state.
He called on the federal government, the Ecological Fund and the World Bank to assist the state in tackling the problem, stressing that the state government alone cannot effectively control erosion sites in the state.
“We need assistance from the World Bank, the ecological fund and the federal government to be able to deal with the problem. The state government alone cannot do this. Everyone has a responsibility” he said.
He disclosed that his ministry is going to carry out an Environmental Impact Assessment of all projects in the state to ensure that such problems do not happen again.