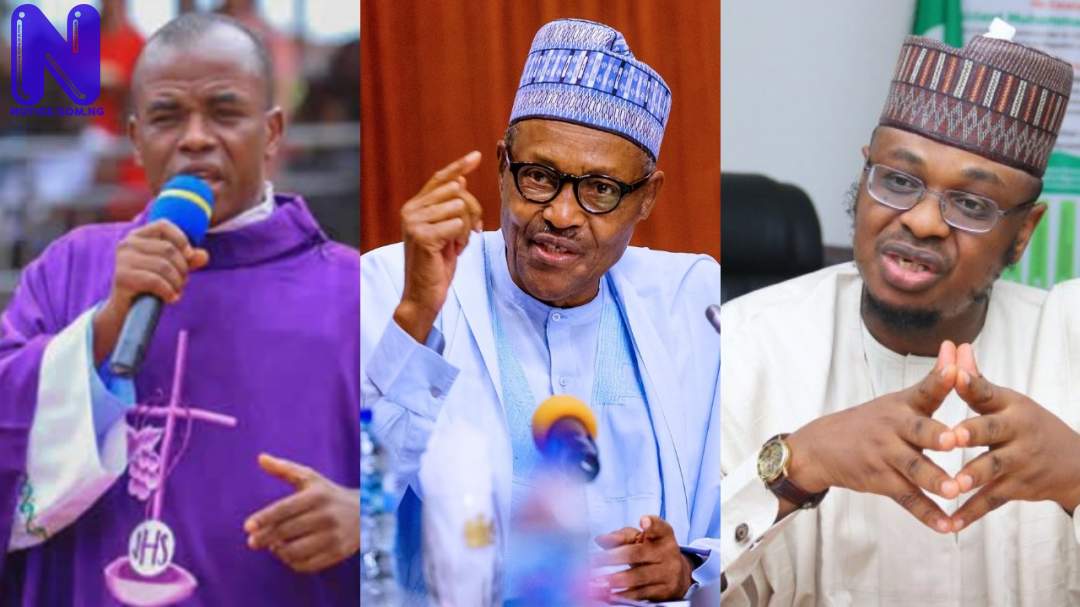 In public relations practice, decision-making processes on an issue and crisis management are always the toughest before any act of communication can be effectively executed.

Unlike journalism that feasts on bad news, which is what sells, the tradition of public relations or PR is to engage in ‘damage control’ through effective crisis communication strategies.

The key to successfully navigating a crisis is through preparation and teamwork, as the communicator needs a fast and carefully crafted response to minimise damage and prevent reputational erosion.

DO YOU KNOW >>> Bring back our Nigeria - Emmanuel Onwubiko

I was not only alarmed but I have been deeply concerned about some recent statements by the Presidency, particularly through its spokespersons, Mr. Femi Adesina and Mallam Garba Shehu, who have both incidentally served as Presidents of the Nigeria Guild of Editors (NGE) in the recent past.

Some of their reactive statements to issues could essentially be described as journalistic, for the predilection towards making news headlines, and these have been quite disturbingly below the standards of PR, which tend towards demonstrating empathy, employing diplomacy and forestalling the attrition of relationships, when responding to issues of deep concern.

The recent statements by the Presidency over what they considered as the unsavoury comments of Father Ejike Mbaka, alongside the reaction to allegations of the past extreme views of Dr. Isa Pantami, the Minister of Communication and Digital Economy, are teachable instances of how not to engage in public communication. If anything, they can both be said to have been hasty in their conception and execution, and ultimately needless.

Dr. Pantami, an Islamic cleric as well as an ICT scholar, was alleged to have proffered extremist views in the past while describing some religious extremists as “fellow Muslims,” and praising the leadership of Al Qaeda in a video. Another report claimed that Dr. Pantami had chaired a meeting in a North-Eastern state in Nigeria, which had sat to plan an attack on a Christian governor in the North-West of the country.

While Pantami has come out to blame immaturity, ignorance, and a lack of exposure to global politics for some of the opinions he expressed over a decade ago, he has equally expressed regrets for those once-held views and recanted on them, while denying some other untoward allegations made about him. In seeming solidarity to his plight, the Kaduna Chapter of the Christian Association of Nigeria (CAN) and the Supreme Council for Islamic Affairs (NSCIA), among other groups, have faulted some of the allegations levelled against the Minister.

While some commentators called for his resignation, others have tempered this by pointing out that Dr. Pantami has rather being at the receiving end of intolerance for condemning the evil ideology of Boko Haram leaders, including the founder of the group, Mohammed Yusuf, in a debate. His criticisms of terrorism had made the commander of Boko Haram, Abubakar Shekau, to subsequently threaten Dr. Pantami with death in a series of audio and video recordings that are available on the Internet.

The otherwise swift response of the Presidency to the allegations made against the Minister can be faulted as being fairly hasty and unduly defensive. While one may be uncomfortable with some of Pantami’s past remarks, and his earlier advice that clerics should shun public office, it is an undeniable fact that he remains one of the most focused, result-oriented and charismatic Ministers in the current dispensation. He is a round peg in a round hole, in terms of professional competence in the sector he oversees.

The points in the presidential statement released in Pantami’s defence could have been highlighted by third parties and beneficiaries of some of the projects he has executed in office. It is without controversy that within the past two years, Pantami as the Minister in charge of ICT in the country, has ensured the implementation of digital projects nationwide, including the creation of ICT Innovation Hubs, the enabling of the acquisition of digital skills for entrepreneurs and innovators, alongside the setting up of Community IT Training Centres, Tertiary Institution Knowledge Centres (TIKC), and School Knowledge Centres (SKC). Also, the commissioning of more Emergency Communication Centres (ECC) across Nigeria, the downward review on Right of Way Charges for improving broadband penetration in states; the mandatory registration of SIM Cards to ensure these are not used for criminal activities, etc.

Apart from saving the Federal Government over N22 billion through the clearance of information technology (IT) projects, as of April, over 51 million Nigerian People had been registered for the National Identification Number (NIN) , with the majority having updated their SIM registration records. Therefore, it was not surprising that the latest data from the National Bureau of Statistics (NBS) shows that the contribution of the ICT sector to the Nigerian economy grew by 14.70 per cent in the last quarter of 2020. It further indicates that it is the fastest-growing non-oil sector, with double-digit growth within the period under review.

In a similar vein to its problematic release pertaining to Dr. Pantami, the Presidency’s reaction to Father Ejike Mbaka’s call for the president to resign over the deteriorating insecurity situation in the country was needless, unwarranted and unjustifiable.

Therein the Presidency made a strong accusation that Mbaka’s latest uncomplimentary public commentary was due to his anger at President Muhammadu Buhari for not awarding him contracts as a reward for his previous campaigns and support for the president in the elections of 2015 and 2019.

In January 2015, the outspoken Igbo Catholic priest had urged Nigerian People to vote out President Goodluck Jonathan for failing to stem the tide of insecurity and corruption in the country.

At a greater risk to his life and parishioners, the Spiritual Director of the Adoration Ministry (AMEN) had endorsed and campaigned vigorously for Muhammadu Buhari, a Northern Fulani Muslim from the pulpit, saying that was what would bring the needed change to Nigeria.

The religious leader then said, “I love President Goodluck Jonathan and I used to be his ardent fan, but I want good for my people and that’s why I want Nigerian People to vote out Goodluck Jonathan and vote General Muhammad Buhari. I don’t care if Buhari is a Muslim and from the North; all I care about is that Buhari can save Nigeria.”

Shortly after Buhari’s victory in the election, and on becoming the Nigerian president, he had commended Father Mbaka for his patriotism in the run-up to the general elections, saying that the renowned cleric’s courage had earned him a spot in the sands of time.

In a statement to congratulate Mbaka on the occasion of his 20th priestly ordination, the president said history would be kind to Father Mbaka for daring to speak truth to power, even at great personal risk. Buhari mentioned that Father Mbaka had chosen the path of honesty, despite realising that this could attract hostility from those he described as, “leaders detached from reality.”

The president further stated that “the priest’s courageous actions, while the Peoples Democratic Party was still in power, was clear evidence that religious leaders are the custodians of truth and morals in society.”

In addition, the president noted that Fr. Mbaka’s decision to identify with the masses and uphold the struggle for improved governance in the country was, no doubt, enviable. In that statement signed and released on behalf of Mr. Buhari by Garba Shehu, the President was extremely impressed by the priest’s sincere comments and patriotic disposition over the state of the nation at the time.

The statement concluded by praying to God to grant Father Mbaka greater wisdom, good health and long life, as well as the continued resolve to serve humanity.

I strongly believe that those who stood by us when it really mattered, especially respectable public figures, do not deserve a demeaning and disrespectful response, no matter the situation.

A professional and effective communicator should always realise that even when there are disagreements and contestations of opinion, particularly on behalf of a public personage like a president, the communicative endeavour should be one that sets out on persuading from opposition to a more agreeable point of view, in the most civil language, and without seeking to inflame a situation further. PR ought to build up mutually intelligible relationships, even when this is strained while avoiding the seedy route of the public fight, in the manner of motor park touts – the bolekaje and roforofo mode of confrontation – in the name of political communication.

We should always acknowledge and bear in mind all the well-meant gestures of those who might have been admirers in the past and also learn to develop a greater capacity to tolerate criticism, without muddying up issues by dredging up other sordid narratives.

In all these, while I have noticed that the media is generally more inclined to celebrate conflict and crisis, they also deliberately – and rather, unfortunately, censor – other crucial sides of stories that ought to temper the public drift towards hysteria. On one level, if the Presidency had released another slew of commendations of Father Mbaka, very likely this wouldn’t have received the same attention the attack has received, which offers an eternal insight into the psychology of the media.

On the other level, while the situation that Dr. Pantami has found himself in is quite saddening, yet there is the flip side in which there are dozens of videos and audios of his attacks against religious extremism and terrorism in the past decade that his newly hatched critics have wilfully refused to acknowledge. As earlier mentioned, these had attracted several death threats from Boko Haram, which though were widely reported in the media in the past, have barely been referred to in the present assault on him.

While public relations is different from journalism, they equally have much in common, which should be affirmed, rather than being negated. In this regard, the professional communicator and journalist should strive towards emphasising more of what unites us, rather than focusing on our divisions.

Yushau A. Shuaib is the author of “Award-Winning Crisis Communication Strategies” www.YAShuaib.com