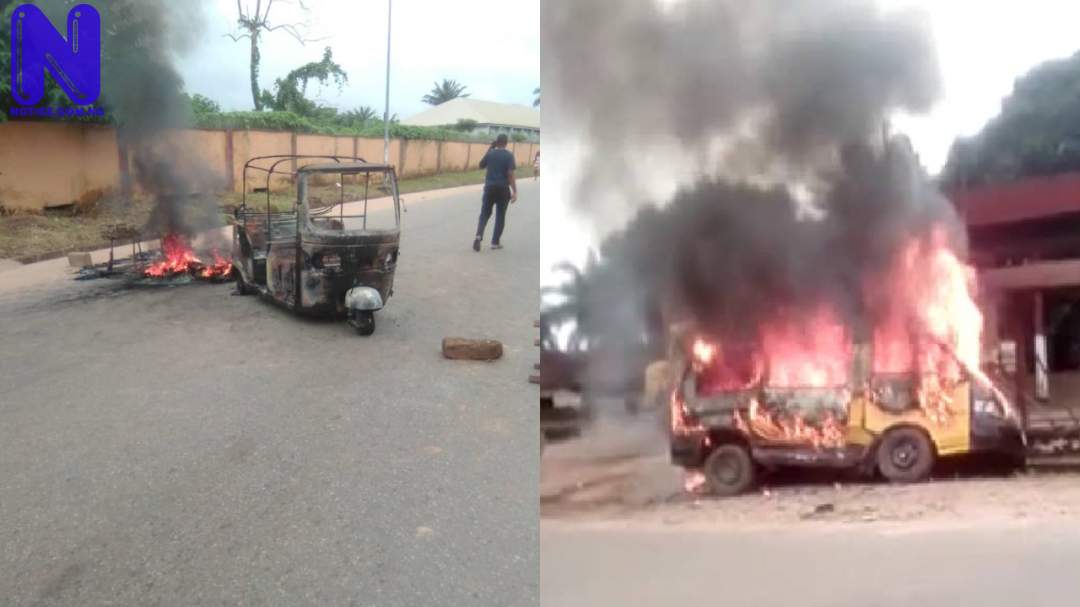 Some persons, alleged to be members of the Indigenous People of Biafra, IPOB, have set ablaze a tricycle and a bus while enforcing the sit-at-home order by the group in commemoration of the invasion of the home of its leader, Nnamdi Kanu, in Umuahia on September 14, 2021.

The tricycle operator, who was attacked in Awka, Anambra State, on Tuesday morning along Arthur Eze Avenue, was said to have received machete cuts on his hand and leg, and dispossessed of his tricycle, which was then set ablaze.

When Press visited the area, the tricycle was still at the spot of the incident, totally burnt down.

DO YOU KNOW >>> EFCC arrests 11 suspected internet fraudsters in Rivers

In Nanka, Orumba North Local Government Area, also in Anambra, a town service bus, which was said to be conveying passengers from Awka to Ekwulobia, was also attacked by persons alleged to be enforcing the IPOB order, also setting it ablaze.

A source said the passengers, who were being conveyed by the bus were spared, as they were made to disembark, before the bus was pushed into a ditch and set ablaze.

Spokesperson of the Anambra State Police Command, DSP Toochukwu Ikenga, refused to confirm the incidents when contacted. He simply stated that men of the command had been at places where some incidents have been registered, and have restored normalcy in such places.

"The command and other security agencies have since intensified patrol and surveillance. Police personnel are on ground and the situation is being monitored. Normalcy has also been restored in some of these areas," he said.