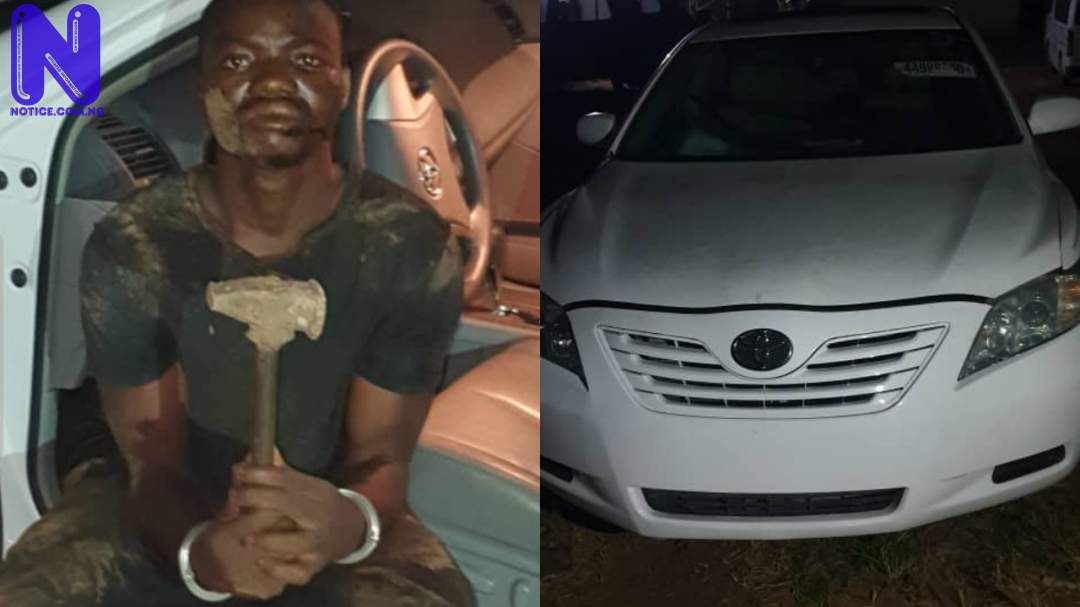 A suspected armed robber, Alo Monday, has been arrested by the police with a car he snatched from his victim, the Ogun State Police Command has said.
The police said the suspect was a member of an armed robbery gang operating along Sagamu-Ikenne road, Ogun State.
Press gathered that the suspect was arrested on Friday with the stolen Toyota Camry car.
The suspect, an indigene of Ebonyi State, was arrested following a distress call received by police at Sagamu division at about 8:30pm that armed robbers were operating along Sagamu-Ikenne route.
A statement made available to Press by the Ogun State Police Public Relations Officer, Abimbola Oyeyemi, on Sunday said the DPO of Sagamu division, SP Okiki Agunbiade, immediately mobilized his patrol team and moved to the scene.
“On sighting the policemen, the robbers quickly jumped into an already snatched unregistered Toyota Camry car (also known as “Muscle”) and started driving towards Lagos-Saagamu interchange.
“They were hotly chased by the policemen, consequent upon which they abandoned the car and ran into the bush,” the police PRO said.
According to Oyeyemi, the entire area was cordoned off by the policemen who, he said combed the bush in search of the hoodlums.
“The effort paid off when one of the robbers, Alo Monday, was apprehended with a sledgehammer which he used to hit the owner of the car on the head before snatching the vehicle.
“The combing exercise drew the attention of youths and commercial motorcyclists in the area who descended heavily on the suspect and beat him to stupor.
“He was ‘smuggled’ out of the place by the police who took him to the hospital for treatment.
Meanwhile, the Commissioner of Police, Edward Ajogun, has ordered the immediate transfer of the case to state CIID for discreet investigation.
The CP commended the quick response of his men to the distress call
Ajogun directed that the fleeing members of the gang be hunted and brought to justice soon.