Seven years after, the world remembers Chibok Girls, renews calls for their release 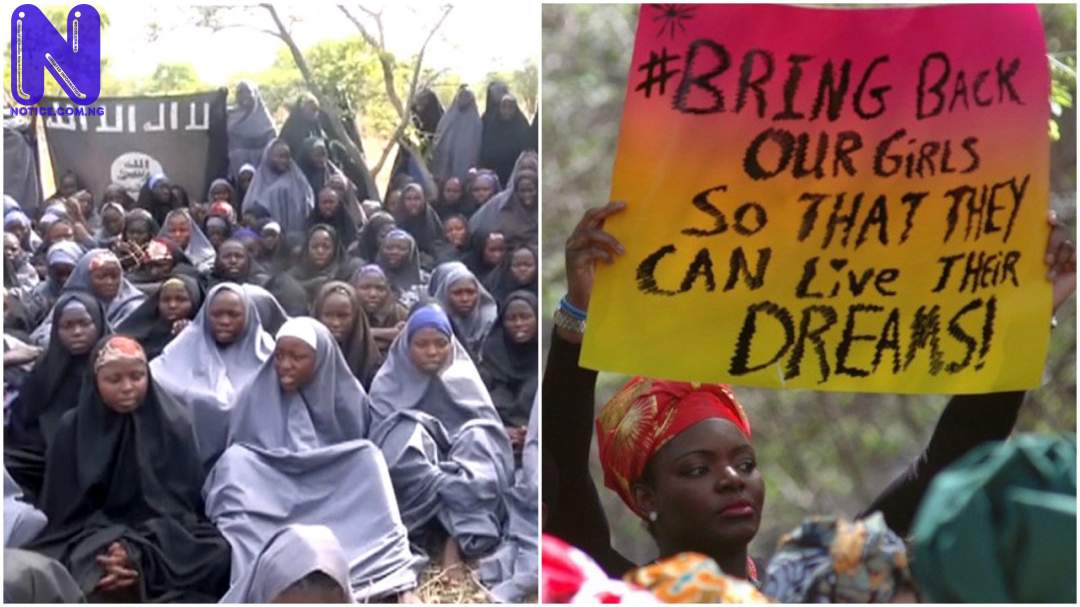 Wednesday 14th of April, 2021 marked the seventh year anniversary of the abduction of the 276 students of the Government Girls’ Secondary School, Chibok, Borno State in North-East Nigeria. And in what has become an annual ritual, the world spared them a moment, especially the remaining 112 of them in the captivity of the violent Boko Haram insurgents.

On the chilling night of April 14, 2014, the insurgents invaded the GGSS, Chibok, in what still remains a mystery, carting 276 students. It was at first, a tale to many people, those who felt it was practically impossible to herd 276 human beings together in such an illegal operation and railroad them into captivity. in spite of that, reality dawned that the students, all girls, who were preparing for the West African School Certificate Examination, have indeed been abducted by the murderous criminal elements.

The then administration of President Goodluck Jonathan, a victim of the initial disbelief, faltered in its response to the fate of the girls, leading to anger in the country, and of course, political backlash, a situation that was harped upon by those who went to better schools in the act of politicking.

The initial faltering by the Jonathan administration laid the unfortunate foundation for the continued stay of the remaining 112 girls in captivity seven years after.

The fate of the students, some of whom have been released in batches, remained a sore point and a sad reference in the nation’s war against insurgency, banditry and the less than appropriate value for the lives of citizens, especially the vulnerable in the society.

It is also a sad remembrance of the opportunistic nature of human beings, as the abduction of the girls was seen as an opportunity to unleash a ‘revolution’ against the then Jonathan administration, a revolution which eventually led to its ouster from office in the 2015 general elections.

For many Nigerian People, who bought the narration of the then opposition All Progressives Congress (APC), Jonathan and his government must give way for more competent hands to come in so that the girls can be rescued and to avoid a recurrence. The APC promised heaven and earth but unfortunately, instead of having all the girls released, 112 girls, whose fate have remained unknown, have remained in the hands of the insurgents, while many other Nigerian People have been abducted in similar fashion in the intervening years.

On the activism level, the abduction of the students became a ready tool for many activism merchants to push their luck further, gain visibility and relevance, especially as the entire world rose up to condemn the abduction with one voice. It was indeed a strategic opportunity for activist-merchants.

To mark the anniversary of the abduction of the girls, the Presidency, though in a late effort, that looks more like ‘photo-ops’, said the Chibok girls are not forgotten.

Titled ‘Chibok girls still on our minds’, a statement issued by the Senior Special Assistant to President Muhammadu Buhari on Media and Publicity, Garba Shehu, reads: “The Presidency reassures parents and all concerned citizens that the missing students of Government Girls Secondary School, Chibok, Borno State, remain constantly on the minds of government as they are always on the minds of their parents.

“The Presidency gives assurances that the release of the remaining Chibok girls is still work in progress.

“No one is giving up hope here. Efforts to secure their release through various channels and activities of the security and intelligence agencies remain on course. The recent decisive push by the military against the terrorists gives hope that a breakthrough is possible and could happen anytime soon.

“The Presidency asks for support, understanding and prayers for the military as they discharge their historic mandate to quickly finish off the insurgency war and free all citizens held hostage.”

Though the statement from the Presidency is expected, many Nigerian People have come to see it more of an annual ritual that offers no soothing hope and gives no concrete assurance as it has always been the story by the government.

For the parents of the 112 students, the yearly assurance by the government for the release of their children may have lost meaning, as they keep living with the trauma of not knowing the state of their children, whether they are alive or dead. Such an assurance as given by the Presidency surely makes no difference to them any longer.

To share in the pains of the parents, 20 of whom have reportedly died while waiting and hoping that their daughters would come back home to them, the world remembered the Chibok girls, renewing calls for their release.

Leading the charge is the Speaker of the United States House of Representatives, Speaker Nancy Pelosi, who took to her verified Twitter handle, @SpeakerPelosi on Wednesday to call for the return of the girls.

She tweeted: “It’s been seven long years since the Chibok Girls were abducted by Boko Haram in Nigeria. I stand with @RepWilson and the families of the 112 girls who are still missing in the fight to #BringBackOurGirls.”

Also, the Foreign Relations Committee of the US Senate, tweeting under the verified Twitter handle @SenateForeign, spared the girls their thought.

“After 7 years, it is still painful to reflect on the tragedy of the #ChibokGirls’ abduction by #BokoHaram. The mass kidnapping of these girls, and hundreds of schoolchildren since, is reflective of #Nigeria’s persistent struggle with instability, extremism, & accountability”, the committee tweeted.

In the same vein, Congresswoman Lucille Roybat-Allard, joined the many political figures around the world who spared their thoughts for the girls and called for the release, when she tweeted with the handle @RepRoybatAllard on Wednesday. She wrote: “Today marks 7 years – 2,555 days - since #BokoHaram abducted 276 schoolgirls. We must never forget the 112 #ChibokGirls still in captivity & all the victims who have been killed or abducted in the years before & since they were taken. #BBOG.”

To mark the seventh year anniversary of the abduction of the girls, international rights group, Amnesty International has some harsh words for the Federal Government, accusing it of not learning from the Chibok experience in protecting school children from attacks.

The rights group said in a statement on Wednesday: "The Nigerian authorities' failure to protect schoolchildren from recent attacks clearly shows that no lessons have been learned from the Chibok tragedy. The authorities' only response to schoolchildren being targeted by insurgents and gunmen is to close schools, which is increasingly putting the right to education at risk. Whatever authorities are doing to tame this tide, it is not working."

The #BringBackOurGirls campaign group (BBOG), one of the most visible groups that have campaigned for the release of the girls over the years, vowed not to relent in their efforts to ensure they are released.

In a statement announcing the launch of a global campaign for the release of the girls, the BBOG said: "Even as we observe that other atrocities against Nigerian children and students assault the sensibilities of Nigerian People, and those of the children are returned to their families; the fate of our missing 112 Chibok girls and the continuing trauma of Chibok parents and their communities are slipping from the public consciousness and are no longer a priority for the Federal Government.”

Tweeting also on Wednesday, the co-founder of the BBOG, Dr. Oby Ezekwesili, said: "Seven years today, 276 young women who trusted our country to protect them, were abducted from Government Secondary School in Chibok, Borno State. One hundred and twelve -112 of our girls and Leah Sharibu are still unaccounted by @NGRPresident. No word. No closure."

Also, fiery activist and vocal critic of the administration of Buhari, Aisha Yesufu, encouraged those who have been campaigning for the release of the girls not to relent until the girls are released despite the unfortunate silence of the government.

Yusufu also contended that with the level of insecurity in the country, especially in the Northern part of the country, a generation of children whose education is being permanently dented is being created.

For Governor Babagana Zulum of Borno State, optimism and hope for the release of the girls may just be the only psychological solution available at the moment, as he hoped, in a statement commemorating the anniversary of the abduction, that they would soon be released.

"As a father of all sons and daughters of Borno, I haven't lost hope that our remaining Chibok schoolgirls and other abducted persons will be safely recovered," Zulum said.

As the world marked the anniversary of the abduction of the girls, a cross section of Nigerian People say they are constantly reminded that the government has over the years not shown the kind of commitment expected of a government whose citizens, especially girls, are with a violent group with no regard or respect for human lives. As stated by them, they have been fed with promises and verbal commitment without corresponding action.

From Bad to Worse – A timeline of Abduction

Press recalls that during a meeting with Swiss President, Alain Berset in 2018, Buhari said that the Federal Government had put strategies in place to ensure the safe return of the girls. As stated by him, the government was building on the past successes of securing the release of some of the Chibok girls and other abducted persons in the North-Eastern part of Nigeria.

He said: "We will continue to make the safe release of the remaining Chibok girls a priority and will welcome any kind of support from any quarters to make this happen.”

The reality on ground, in spite of that, is that instead of rescuing the 112 girls who are still in captivity, things have gone from bad to worse, as the nation has continued to witness embarrassing mass abduction of students and other Nigerian People since the abduction of the Chibok girls, and most especially after giving his words in 2018.

Here are some of the recent mass abduction of students:

17 February 2021, 27 students of the Government Science Secondary School in Kagara, Niger State, were abducted by gunmen from their dormitory.

The question on the lips of many is, will the 112 Chibok girls be reunited with their long-suffering parents before another April 14, or will another ritualistic anniversary be observed on their behalf while they remain in captivity?