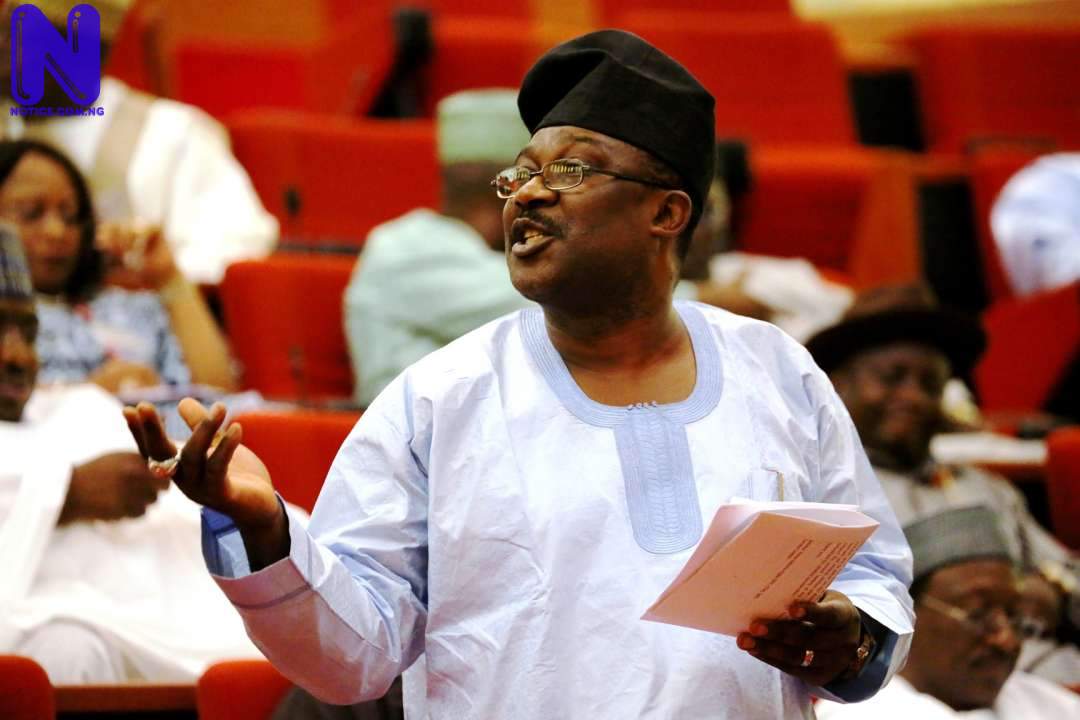 The Senator representing Kogi West Senatorial District, Smart Adeyemi, in emotion-laden contribution to a motion on insecurity in Nigeria on Tuesday, wept openly over sustained devastation and wreck by terrorists across the nation.

While contributing to the motion sponsored by Senator Sani Musa, stating that Boko Haram terrorists have taken over three Local Governments in Niger State, Adeyemi admitted that security system has collapsed and innocent citizens are the receiving end.

He said it is foolhardy at this time for government to pretend about its helplessness, more so, that Senators should continue to be partisan on security issues.

Kogi lawmaker said: “Mr President, insecurity is a serious problem today in Nigeria and there come a time where we can do nothing, but to speak the truth irrespective of sentiment.

“Today Mr. President, all of us are being threatened. A lot have been said this morning Mr. President and I want to thank you for giving us time to speak expressly on this issue.

“Like my sister was saying, there come a time when talk will talk itself. There comes a time when truth becomes a torchlight.

“We need not to run away from the fact that more than ever before in the history of our nation, this is the worst instability so far and because of insecurity in our nation, today there are of lot misgivings; there are a lot lot of misinterpretation.

“Some persons believe it is government that is supporting terrorists; some people believe some persons sponsored those who are destabilising our nation. We are not pretending we are capable of confronting the situation in our hand.

“America as powerful as they are, when pandemic came through China they woke up to their responsibilities. We shouldn’t pretend that we needed foreign support.

Adeyemi insisted that government should seek foreign intervention before the nation is doomed, adding that Nigeria should forget about its pride and seek foreign aid.

“Let no body deceive us Mr. President. A lot of millions of naira has been put into security services nothing is coming out of it. We wouldn’t wait until our nation got burnt. Let us get up and call for foreign support. I am APC and I have been supporting our party, but let the President know that we who support APC could no longer keep quiet.

“Everyone of us have chapter of history. When the history of this period is told, whatever is our position will be a chapter.

“We cannot keep quiet any longer. It has gotten to a level that we can no longer sleep with our eyes closed. Our children are not free. The President must rise to the occasion.

“The situation is our security system has collapsed; it has failed, because it has failed, we need foreign support, it cost Nigeria nothing. Forget the ego, forget Nigeria in African nation.

Hel lamented that crisis has engulfed the nation, stressing that the National Assembly should act fast before it gets late, particularly that terrorists are few distance away from the Federal Capital Territory.

“From the North to the South nobody is safe and Boko Baram are to kilometres to the nation’s capital and today, I cannot travel to Kaduna and Niger State where I was born.

“The President knows this is a bad time for our nation. They are killing people in the East. What are we doing in the National Assembly? Our country is bleeding….” (weeps).