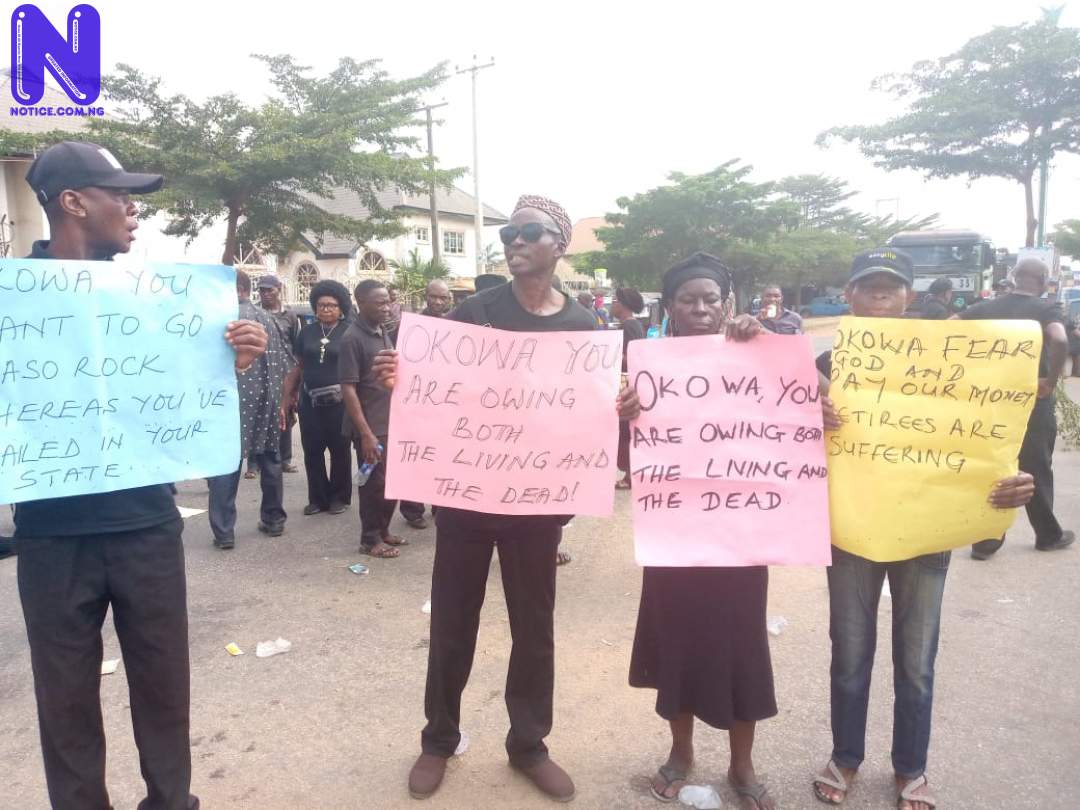 Retirees have protested to Government House in Asaba, Delta State to demand that their gratuities be payed to them.

The retired teachers, drawn from the 25 local government areas of the state, barricaded the road linking Asaba and Anwai, thereby making vehicular movement impossible while the protest lasted.

There was also no vehicular movement into and out of the Government House.

The protesters, armed with placards with various inscriptions, lamented the lukewarm attitude of Governor Ifeanyi Okowa to the payment of gratuities of the senior citizens.

Speaking to journalists, their leader, Mrs Ejieh Helen remarked that the issue of non payment of gratuities of retired teachers by Governor Okowa began in 2015 when he became governor.

She said Okowa started to pay in 2017 after they protested, adding that the government was releasing N150 million a month and it was only enough to pay about 20 retirees whereas there are over 6000 retired teachers waiting to be paid.

Mrs Ejieh revealed that some of them have retired about ten years now, the number of retired teachers kept rising because Governor Okowa failed to pay the retirees.

“The money is our money that we saved while we were working and he doesn’t want to pay. We shall take our protest to the National Sports Festival on the 30th of this month.”

On the allegation that the main opposition party in the state, the All Progressives Congress (APC) is using the retirees to protest, she remarked that Governor Okowa should hide his face in shame for politicising their plight.

“I started teaching in 1981 and that is over 40 years ago. I served this state from the time of Bendel. I don’t know why he is talking of party. Does he think we don’t have sense? Do we need anyone to tell us to ask for what rightly belong to us? We are not asking him to give us money. We are only saying he should give us the money we saved monthly while we were working so that we can use it to achieve something meaningful when we retire.

“When Ibori and Uduaghan were governors did you see us protesting? It was because they were paying retirees their gratuities.”

Another protester, Mr Lori Patrick, from Warri South Local Government Area, who spoke at the occasion, lamented the loss of 68 retired teachers who have been waiting endlessly for their gratuities.

“We have lost 68 members and I have all their names. This is just in Warri South Local Government Area. So you can imagine the entire state. That is why we keep appealing to them to pay us. We are Deltans. They should save lives, they should not kill us because they would gain nothing from it. We have been begging the governor to no avail.”