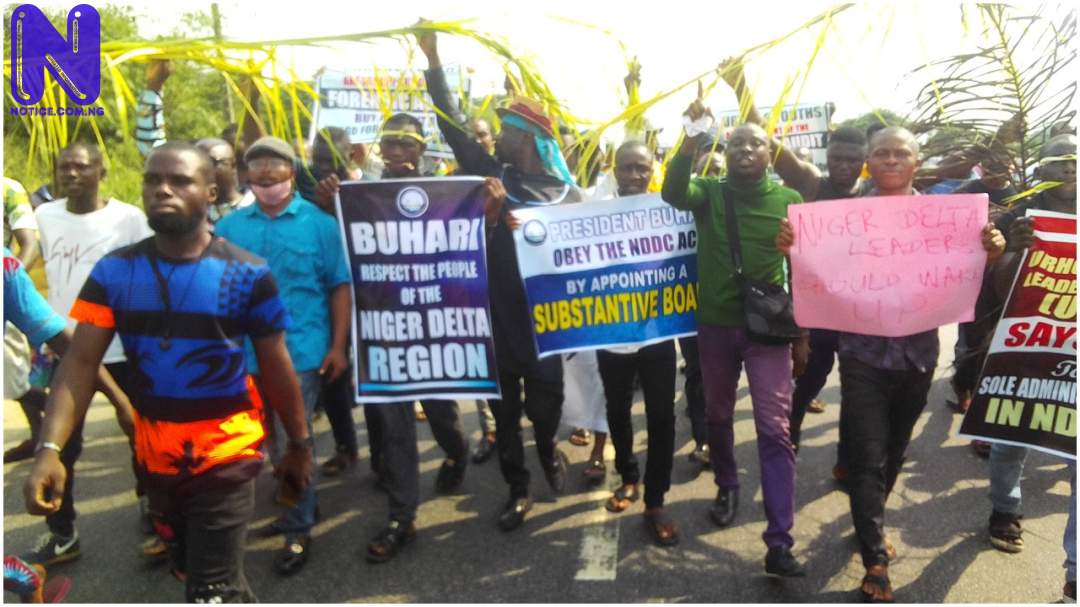 Hundreds of protesters on Thursday shut down the Agbarho section of the East-West road in Delta State in rejection of the appointments of a sole administrator for the Niger Delta Development Commission, NDDC, by President Muhammadu Buhari.
The protesters who are mostly youths also issued the President a twenty-day ultimatum to appoint a substantive board for the NDDC.
The youths who are under the auspices of “Urhobo Youths Leaders’ Council”, UYLC said though they were in support of the ongoing forensic audit of the commission, the President must appoint leaders for the Commission.
The youths bore placards with inscriptions, “Buhari obey the NDDC Act by appointing a substantive board “, “Urhobo youths are angry”, “Urhobo youths are in support of the forensic audit but appoint a board for the Commission”,” Buhari enough of politics in Villa over NDDC and put in place substantive Board and “Our roads are bad. We need a substantive board in NDDC” amongst others.
Speaking with newsmen, Coordinator of the protesting group, Lucky Emonefe said Urhobo youths were in support of the forensic audit ordered by Buhari stressing that, “Those who are corrupt must face the consequences of their actions.”
The youth leader also called on Buhari to obey the law, especially section 2 establishing the NDDC by inaugurating a substantive board.
Emonefe also said the youths have rejected the politics allegedly being played with the future of the NDDC and the entire people of the Niger Delta.
“There are some groups of persons playing politics in the Villa over the NDDC matter. They want to personally acquire the NDDC as their personal property. This is a board that’s made up of persons from different States. What we can have is just a sole administrator.
“As youths of Niger Delta, we reject the sole administrator appointed by Mr. President. We want Mr. President to obey section 2 of the NDDC Act by inaugurating the Board.
“We are not interested in who is on the Board. That’s not our business. But what we want is that Delta State representatives, Ondo State representative, Bayelsa State representative should be there. Not that only one man in Akwa-Ibom should oversee the affairs of the Niger Delta.
“Our governors have spoken. Our traditional rulers have spoken. Our mothers and fathers have spoken but nobody listened. We the youths of the Niger Delta, we are here to tell Mr. President that this coming out massively is a warning to the President. It is a warning to the Federal Government. Our next coming out will be in the Villa.
“We are mobilizing massively to the Villa to press home our demands. We are going to tell the leaders in the Niger Delta that are playing politics with the issue of the NDDC. We are going to visit their parents. We’re going to visit their children. We will visit them personally and they will know what that means.
” Urhobo Nation is never afraid of anything. We are ready to face it. We are ready to face that man called Akpabio who feel he can go to Indian and perform diabolic means over Mr. President. We are not going to tolerate it. The Board should be inaugurated.
“We are giving Akpabio and the Federal Government 21 days ultimatum, if they refuse to obey us, we are going to the Villa. We are going to stay in Abuja without going back.”
Comrade Emonefe also expressed disappointments on the leaders of the Niger Delta region including the Deputy Senate President, Sen. Ovie Omo-Agege, Mr. Rotimi Amaechi, Mr. Festus Keyamo SAN and other lawmakers from the region.
“They’re all sleeping without doing anything. We have the likes of Amaechi, we have the likes of Keyamo and the minister of petroleum resources, they cannot say anything. Only one man, Godswill Akpabio, pocketed them.
“It is an aberration. It is an insult to the sensibility of the Niger Delta people. It is an insult to the sensibility of the Urhobo People. We are going to resist it in any form.”
Comrade Emonefe warned that the peaceful protest is a warning just as he threatened that the youths will shut down all assets belonging to the Federal Government in their next outing.
In his words,” it is often said that when the oppression of the oppressed increases in geometric progression, revolution becomes inevitable.”
While noting that the Urhobo people have been patient enough, Comrade Emonefe said the youths came out to demonstrate in their peaceful nature. He, in spite of that, warned that their peaceful dispositions should not be taken for granted stressing that, “If we are going, Akpabio will tell the story.”