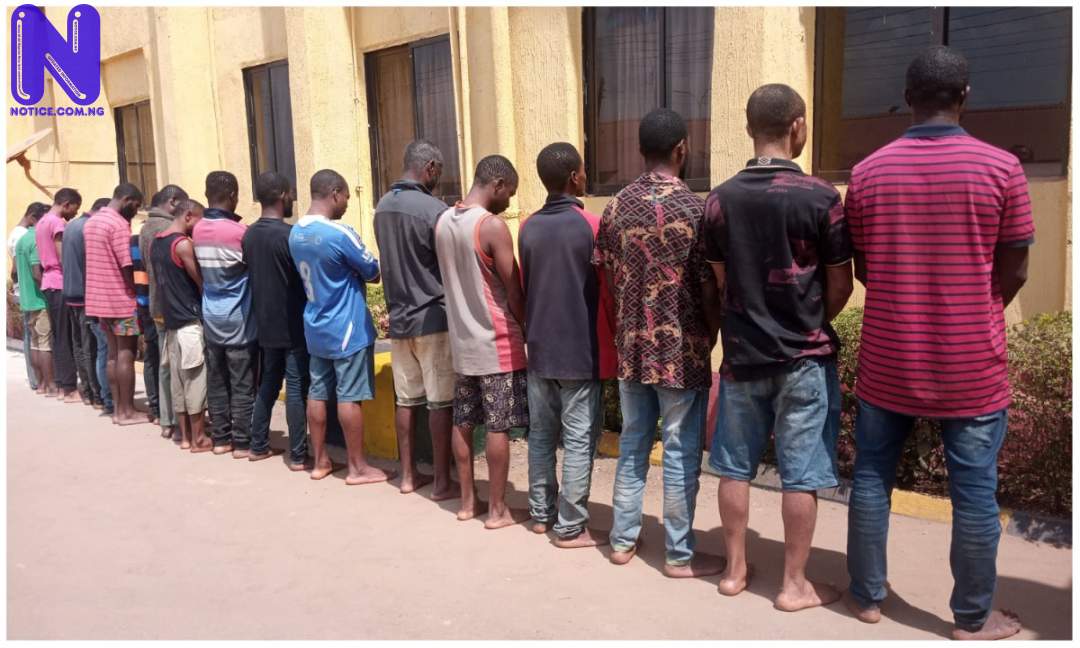 Ebonyi State Police Command on Monday paraded one Ebubeagu Operative, Nnamdi Omeoha and twenty-five (25) other suspects over alleged killings and wanton destruction of valuable properties, including the house of the All Progressives Congress, APC, Chairman, Stanley Emegha.

The Commissioner of Police, Aliyu Garba through the spokesperson, Chris Anyanwu said the suspects were arrested in connection with the killings and razing of houses on 26th of December 2022.

According to the police: “The key actors among the suspects arrested volunteered useful “confessional statements” that exposed the aggregate of overwhelming findings hereunder outlined:

“The fracas that engulfed Ekoli-Edda on 26/12/2022 ignited at about 1600 hours during a face-off between the security aides of Hon Stanley Okoro Emegha versus a faction of Ekoli-Edda youth believed to be loyalists of Hon Eni Uduma Chima.

“The protracted political rivalry/ supremacy struggle between the duo is the cause of the showdown that took place. Interestingly, the two political stalwarts hail from the same community, belong to the same political party and even live in close proximity.

“The visit of the APC Chairman to his village on the fateful day, with his aides, infuriated the fragment of the youths in the area who are purportedly adherents of Hon Eni Uduma Chima, hence the showdown that ensued.

“The war songs chanted by Egwu Famous Chinedu, the Town Crier, amidst hitting/blowing of his gong/trumpet, respectively, galvanized the youth into further action, hence, the rampage and escalation of the brouhaha.

The Commissioner further revealed that: “An attempt to arrest one Aruah said to be the leader of the Ekoli-Edda Youth warriors, brought in the warriors who were reserved for the purpose of fighting in the Boundary Dispute between them and a neighbouring community in Cross River State. The said warriors wielded sophisticated prohibited firearms and their actions further degenerated the situation.

Aliyu noted further that the chairman of APC, Stanley Emegha and Eni Uduma Chama were equally arrested on the directive of Governor David Umahi.

“Without minding whose ox is gored, the Governor ordered that the two political stalwarts be arrested and detained, even as the duo are key members of his political party. He further enhanced and facilitated the arrest of the perpetrators and recovery of arms/ ammunition” he stated.

Items recovered from the suspects include; one AK 47 rifle, and its live ammunition, 2 pump-action rifles, 1 Dane gun, 1 village gong, 1 trumpet and 3 AK 47 magazines.