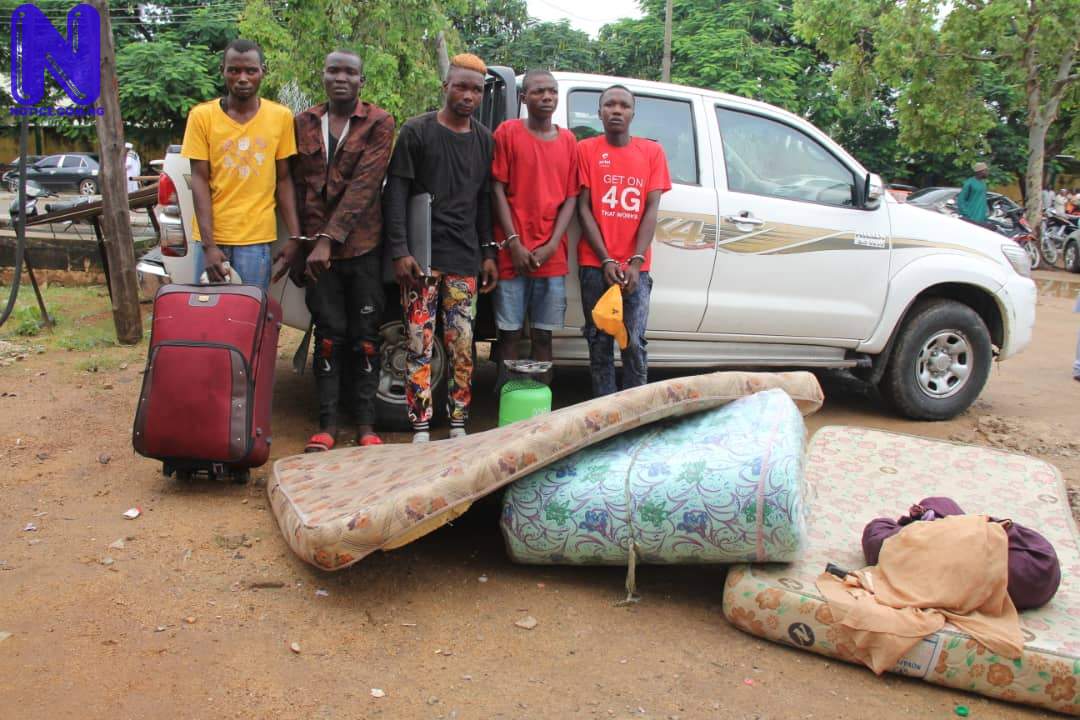 The police in Bauchi State, last Saturday, 26th September, 2020, arrested a five-member gang of armed robbers who attacked and injured a resident of Gwallameji area of Bauchi metropolis.
This was disclosed by the State Police Public Relations Officer (PPRO), DSP Ahmed Mohammed Wakil, in a press release he signed and made available to Press on Tuesday.
The gang members, Endurance Luya (28); Daniel Adamu, aka Small (20); Emmanuel Hassan, aka Junior (23); Aliyu Sulaiman, aka Aljan (25) and Yunusa Ali, aka Raka (19), conspired among themselves and broke into the room of one Fukaihat Ayuba Isah at Banana Island Lodge at Gwallameji.
The robbers, As stated by Wakil, macheted the 23-year-old victim, who sustained varying degree of injuries, before making away with her valuables.
He informed that the items stolen by the robbers are a box containing her cloths; Zinox Laptop; Itel mobile phone; mattresses; gas cylinder and a purse containing the sum of N700.
“On receipt of the report, a team of policemen was drafted to the scene. The victim was rushed to ATBU Teaching Hospital, Bauchi, where she is currently on admission.
“Upon preliminary investigation, all the suspects were arrested in possession of some of the items mentioned above. All of them confessed to have committed the crime,” the PPRO stated that the case has been transferred to the State Criminal Investigation Department (SCID) for discreet investigation.
DSP Wakil added that one cutlass with blood stain; one jack knife, one knife and three sanitary pads were recovered from the gang members as exhibits.
The PPRO stated that the state Commissioner of Police, CP Lawan Tanko Jimeta, is determined to ensure that criminals have no place to hide in the state.
He, in spite of that, emphasized that safety and security are not the sole responsibility of security agencies alone.
DSP Wakil added that, “members of the public must play a vital role towards ensuring peace by availing the police with useful information that will be instrumental to unbundling of criminal acts and tendencies.”