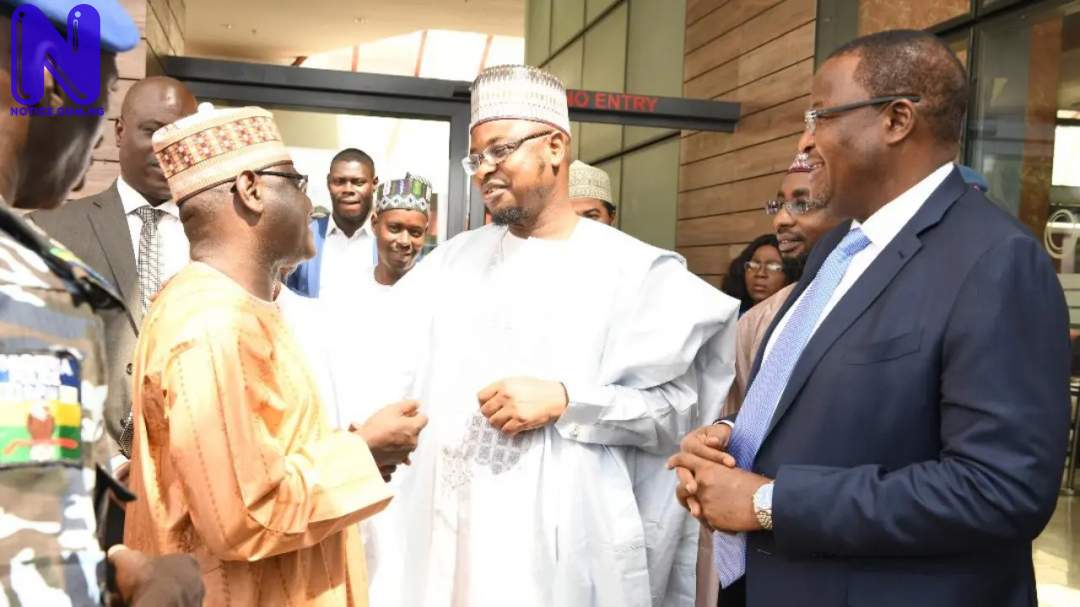 Pantami gave the commendation today (03/02/2020) while delivering his welcome address at 7th Study Group 13 (SG 13), ongoing Regional Workshop for Africa being hosted by the NCC at the Transcorp Hilton, Abuja.

The four-day programme, focused on the theme: ‘Standardisation of Future Networks Towards Building a Better Connected Africa’, has a dual structure: a workshop by the SG 13 for Africa which commenced from 2-4, February 2020; and another special meeting by the Group scheduled for 5-6, February, 2020.

While addressing participants drawn from Nigeria and other African countries as well as officials of the ITU at the event, the Minister said the NCC’s role in being at the forefront of driving digital revolution for Nigeria is well noted. L-R: Mr. Bako Wakil, Director, Technical Standards & Network Integrity, NCC; Dr. Isa Pantami, Minister of Communications & Digital Economy and Professor Umar Danbatta, Executive Vice Chairman/CEO, NCC at the event.

As stated by him, “I want to appreciate the efforts of the Nigerian Communications Commission (NCC) for representing the Federal Ministry of Communications and Digital Economy (FMoCDE) to coordinate these activities of the SG 13 of ITU in Nigeria. The effort is highly commendable. With all sense of responsibility as the Minister of FMoCDE, I commend your consistency in handling the activities of ITU and other study groups of the FMoCDE. Your efforts are most appreciated.”

Speaking to the theme of the event, Pantami said standards are critical to the interoperability of Information and Communication Technologies (ICTs). He said the workshop is taking place at a time the Nigerian government, through the ministry, is making effort to reposition its focus and strategies on how to use new and emerging digital technologies to transform the socio-economic life and activities of the country and for its citizens to embrace a digital economy culture that would impact positively on the lives of the people.

Pantami emphasised the need for Africa to position itself properly in order to be upbeat on the organising principles of developing appropriate standards for the future and next generation digital networks that support a digital economy ecosystem.

“To achieve a resilient and robust future network, standards must be developed to accommodate the evolution of new and emerging technologies. The new frontier comes with great value and potentials for humanity and so, Nigeria and indeed, Africa cannot afford to be left behind,” Danbata stated.

Danbatta, while tasking participants to come up with far-reaching resolutions, as Africa cannot afford to fail in harnessing the full benefits of the digital culture and the fourth industrial revolution, said such “resolutions will hopefully play a pivotal role at the World Telecommunications Standardization Assembly (WTSA) coming up later in the year. Danbatta affirmed that all these developments will also play significant role in achieving the new mandate for the digital economy.” L-R: Dr. Isa Pantami, Minister of Communications & Digital Economy (Left); Mr. Kashifu Abdullahi, Director-General, National Information Technology Development Agency and Professor Umar Danbatta, Executive Vice Chairman/CEO, NCC at the event.

The NCC Executive Vice Chairman therefore charged participants to drive collective interest and let such collective interest be their focal point of discussion, “so that we can have networks that can handle the peculiarities of our environment, as we drive towards development and integration of new and emerging technologies on our dear continent”.

The Chairman, ITU SG 13, Simeon Bagudu, said the Group was established in 2008 to mobilise effective participation of Africa in the area of ICT standardisation. He enthused that the participation of Nigeria in the regional Group and in other ITU events and programmes has been ‘very remarkable.’

The work of Africa Regional Groups in each of the Study Groups of ITU-T, such as the SG 13, comes under the ITU-T Sector. The SG 13 was established in 2008 to bridge the standardisation gap among African countries.