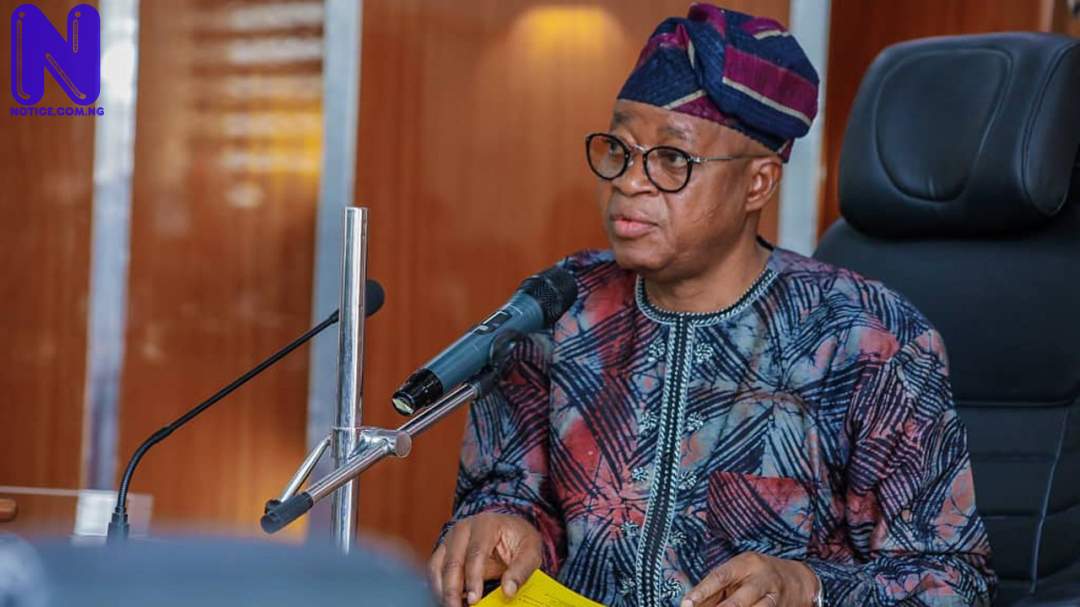 The Osun State Governor, Adegboyega Oyetola has asked members of the All Progressives Congress (APC) in the state to be peaceful before, during and after the state congress exercise on Saturday.

This is as he appealed to all the members of the party, particularly those that would be participating in the Congress to cultivate the Omoluabi ethos which the state is known for.

Governor Oyetola who made this known during the stakeholders’ meeting and press briefing preceding Saturday’s exercise assured the people of the state of adequate security adding that no stone would be left unturned to ensure peace and harmony throughout the entire process.

He commended members of the Committee led by Gbenga Elegbeleye for being diligent and faithful as demonstrated in the outcomes of the last wards and local government congresses held in the State, just as he expressed hope in their capacity and ability to replicate such gesture in Saturday’s Congress.

The Governor also appealed to those that would be participating in the State Congress to comply with COVID-19 protocols and guidelines and urged all the delegates to come out en masse to elect new State Officers for the party.

He noted that, “It is important we conduct ourselves peacefully and ensure we have a hitch-free exercise that we can all be proud of as a party. It is a family affair and should therefore not be seen as a do-or-die exercise. I have no doubt in my mind that tomorrow will be very peaceful. There shouldn’t be any acrimony. It is a way of demonstrating our capacity of electing those that will represent us to pilot the affairs of the party.

“The exercise shouldn’t create any problem at all. I wish the outgoing excos success in their future endeavours and I believe by the Grace of God, a new executive will emerge tomorrow. For those of you that will win tomorrow, I congratulate you, and for those that will not make it tomorrow, please don’t lose hope.”

The members of the Committee of the National Secretariat of the All Progressives Party, APC, for Osun State Congress, on Friday harped on good conduct and Omoluabi ethos during the party’s State congress which is scheduled for tomorrow.

The exercise will hold nationwide.

The Committee members pledged free, fair, credible and acceptable polls, noting that all the participants would be given equal opportunity to exercise their constitutional rights of electing new officers of the party at the State level.

This is even as the Governor urged the party loyalists and members, particularly the delegates, to eschew violence and all forms of irregularities and misconduct capable of marring the exercise.

Responding, the Chairman of the National Congress Committee to Osun, Gbenga Elegbeleye, said the Committee would do all within the prescription of the law to ensure peaceful conduct.

He added that the Committee had been armed with necessary materials to ensure a transparent and open exercise that would be accepted by all.

Elegbeleye applauded the people of the state, particularly the members of the party for their resilience, peaceful conduct and Omoluabi ethos and expressed the hope that the election would be held without any form of rancour.

The Committee Chairman appealed to all the aspirants to come in time so that the process can begin in earnest and without further delay.

He stressed that they are determined to ensure a free, fair, credible and acceptable exercise.

“Osun people have demonstrated this before and I am very confident that this will be replicated in tomorrow’s Congress.

“Though the process is going to be a consensus, it is voting congress, we are in no doubt that the entire process will be peaceful.

“We have seen the Omoluabi ethos in the conduct of our people, particularly the Governor himself. We believe that those that will be elected tomorrow will be good enough to pilot the affairs of the party,” he added.