Our security strategy is working, we have transformed Aba – Abia Gov, Ikpeazu (Interview) 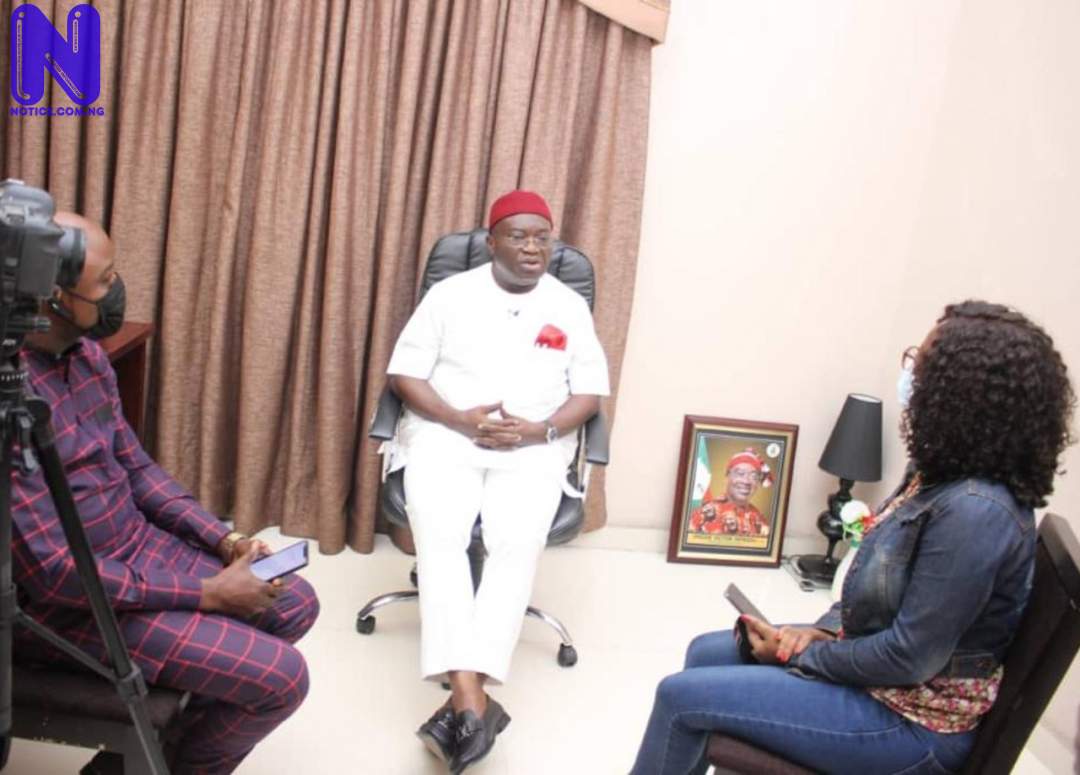 The Abia State Governor, Dr Okezie Ikpeazu has opened up on how he is tackling insecurity in Abia State, highlighting in this interview with Press Editor, Adoyi Abah Ali and Felicity of News Central the strategies his government has employed to tackle the nationwide insecurity.

Ikpeazu in this interview reveals how he has transformed the commercial city of Aba from a sleeping to a commercial giant, in an effort towards a total commercialization and industrialization of Abia State (The Kinetic Abia)

Thank you very much for the opportunity and congratulations on your anniversary. I would like to start this conversation from the security situation in the country at the moment. It’s a nationwide challenge but in recent times, there has been a spike in places like Abia and Imo States. What are you doing to help address this?

I want to place it on record that we don’t really have a security situation that’s as bad as what we experience presently in other parts of the country, especially, the frontline states in the northeast, but that is not to say that the insecurity situation in Nigeria is not glaring. Trying to paint the present situation in the Southeast or Abia with the same brush will not be exactly fair. Now having said that, responding directly to your question about my State, Abia is one of the states in the Southeast, and our challenge basically is trying to cope with some people who feel aggrieved over imbalance, those who feel cheated by the federal government. This has led to a few attacks.

But this challenge has been majorly directed at institutions and law enforcement infrastructures and personnel. Ordinary people, businessmen, and traders are not directly impacted but we want total peace and security as nobody will be happy to do business when bullets are flying all over the place. It doesn’t matter who the target is, so for us here, what we try to do is to first of all make sure that we deploy gatekeepers, deep into our communities, getting pieces of information around movements of persons that are strange and unusual and we have set up a structure that can resolve this quickly.

Again we give advisory based on the interest we have. We advise our people on what to do and what not to do through public enlightenment. We just came back from a 17 local government tour, which involved traditional leaders, church leaders, youth leaders, hunters, farmers, traders, and everyone across local governments. The discussion is why are we pouncing on ourselves? Why are we doing this? Why are we putting the problems on a more serious scale? I think that the challenge of our country is still dependent on three things which include injustice, ethnicity and religion. It’s still dependent on these things and I have people that understand the issues better than myself and I think they’ve been doing the needful.

It still remains a collective thing. If every other Governor does what they are expected to do in their states, this could be addressed on time, what do you think?

Yes, but strategically speaking, I think that at the national level, how quick is their response to the issue? I’m not sure it’s good enough.

Still talking on the security issues, there is a curfew from 6pm to 6am. Do you intend to keep this indefinitely? What are your plans? At least, there should be nightlife.

There has to be life for there to be nightlife and how to move on. We are trying to protect life and property before you can now make a choice on whether to be normal or to do your things in the day, so the curfew is our effort to respond to the challenges that are prevalent here.

It is not indefinite so to speak, it’s just to say that if there is an improvement, we will take other decisions. This will be based on the feedback we get. If by this evening we get information that we should lift, we’ll lift, but you know that Abia State is at the centre of 7 states, some of the states are in the South-South, some are in the Southeast, so being at the confluence gives us advantage, but in this case, it’s a disadvantage. Whatever happens in some of these states directly or indirectly affects us. So we are looking at everything. Every person in leadership position should naturally prioritize security issues. We should adopt quick and intelligent action. Decisions around security shouldn’t be matters based on what the newspapers are saying or what the internet is saying. I think decisions should be based on what I think we need to do to protect lives and property.

Let’s talk about COVID-19. We went round town today and there is no wearing of face mask, no social distancing. I want to ask you as the man at the helm of affairs, what is the state doing when it comes to COVID-19 prevention measures, vaccination drives and others? Are people even quarantined?

Yes, our numbers and statistics are reported daily to NCDC and are published. The citizens of the country are suffering from fatigue, that is one. Two, there are laws that govern the system, some of them are natural and universal. When you are pressed economically and I think I had the privilege of speaking on this when I attended a World Bank meeting in Washington DC and the conversation we had was around environmentally friendly ways of production, reducing the carbon dioxide and making sure the ozone layer is protected, and I said to them that in Africa, we are predominantly hungry. We are looking for a way to even produce what we eat, so our emphasis is not how to do it a better way, it’s just how to do it. So people are pressed on all sides today, the economy is bad concerning insecurity. So because they have to survive, the COVID-19 project has become secondary. Whether it is right or wrong is a matter for discussion, but when you are talking to somebody, you have to be careful about how the person responds, so that it will not be a case of taking a horse to the river and the horse refuses to drink.

But in your capacity as the Governor and seeing what is happening, is there something that you are doing to encourage Abia people to respect some of these protocols put in place, what about Vaccination for Abians?

Certainly, we are doing everything to sensitize and ask state-based leaders and Abia boys to do the advocacy for us, but I say to you that the people are concerned about what to eat. They have gone up to begin to think on how to be safe and put food on the table, that wouldn’t stop government from doing what government wants to do. But I have to bring to the fore that success or otherwise in this battle against COVID-19 depends actually on the ability of the citizens to take responsibility for their safety. You don’t tell an adult to go away from the sun, we thought it will get to a point where people will have to take heed to the protocols because of their health and their loved ones.

For the vaccine, as a subnational government, we are dependent on how much of the vaccine that were brought to Abia State and for our people. I was happy today that when I went to church, it was advertised and they went into details of which category of people should first be vaccinated, starting from the medical and frontline officers, enforcement officers, those who are constantly interfacing with others and those within a certain age bracket.

Your administration has three years more. Are you satisfied so far with the target you set for yourself in infrastructure, especially regarding roads?

I’m not sad about where we are, but I think we just need to keep the tempo going. Between 2015 and now, I have been trying to redefine governance. First, no two states are the same. The problems that confront our states vary and the strategies to tackle same vary. So it’s my expectation that any government at inception must be able to construct a pathway that can lead to the strategy that can be adopted under the circumstance. That was why, here in 2015, we set a target for ourselves on five pillars – trade and commerce, Small and Medium Scale enterprises, Agriculture and education. And trying to push these pillars, we needed to develop what I would call enablers. What are those things that would enable these pillars? The fact today that you were moving around Aba and got stuck in the traffic shows that something is happening. It shows that life has returned to this place. It shows that businesses have returned. That you can see Dominos, Chicken Republic and others shows we are back on track. If you had come here before now, you would have had a clearer picture of what it was back then. The fact that Golden Guinea has come back to life, the fact that we have set up a shoes factory, the fact that we are almost at the verge of setting up a garment factory, it means that we are specific and intentional about doing something in the garment and leather sub-sectors. We have enabled trade and commerce one way or the other. That Abia last month or two months ago came third in foreign direct investment means that we have done something.

The problem we have always had as a country is the issue of continuity and sustainability. Are you looking at this since you have just a few years in office? Does this not worry you?

Most of the roads you saw today are rigid-based roads. What you see is the asphalt overlay but beneath it is cement. Those roads can stay for 40 years. But we did not stop at that. We have set up what we call Youth Road Maintenance Corps. As I speak, some of the youths are undergoing training. From now on, road maintenance will be in the hands of the youths local government by local government. The agenda is nothing but to run operation zero portholes. This is one example of some of the institutions we are trying to set up. We also have Abia Road Infrastructural Maintenance Agency. Before I came in, there was no street light here, but today we have over 2000 street lights in Aba. You will also notice the planted grasses at the middle of the road. That was not the case before now. There is an agency manned by our youths that will maintain these things. So we are gradually setting up structures that can follow up with the maintenance of all Abia projects.