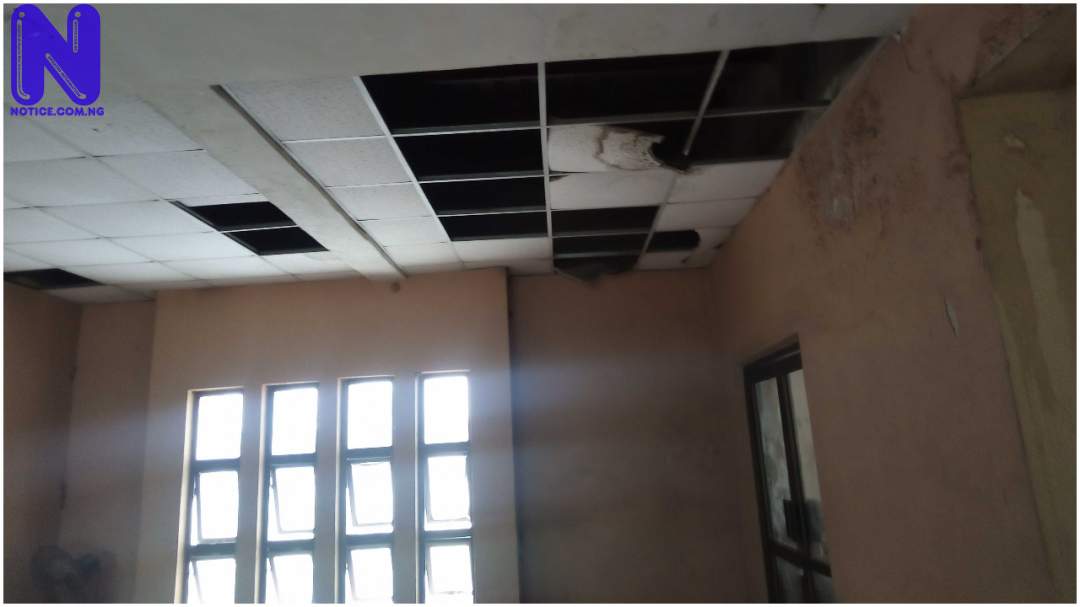 On Thursday, August 5, 2021, in the lobby of the Osun State High Court Complex, second floor; some magistrate courts were filled with water while judges were hearing cases and other court activities were being carried out. The water was leaking directly from the roof, but visitors and lawyers passed through the lobby into court 3 of the High Court.

Many of the court buildings including courtrooms in the premises of Osun the State High Court in Oke-Fia Osogbo have been destroyed and abandoned for many years - this had caused delay of justice.

Some asbestos proffered in some courtrooms as heat-resistant for the comfort of judges, lawyers and visitors have been damaged and unreplaced for years.

"This is a shocking experience we do experience whenever it is raining for years now. Not just here but, all our buildings are old and need renovation." a court staff who preferred not to be mentioned told our report.

In April 2019, Governor Gboyega Oyeola ordered the rehabilitation of buildings, courtrooms and roads within the premises of the Osun State High Court Complex in Osogbo, the state capital. He described the judiciary as a "sacrosanct arm of government which requires adequate attention for greater development," while inspecting the renovation at the Osun State High Court Complex.

Part of the building which was renovated was the High Court Complex which contained court 3, 4 and 5 and others.

Osun State was created on 27 August 1991. The State celebrated its 30 years themed: "Celebrating Milestones, Building a Prosperous Future" in grand style with awards for past leaders that have governed the state and the current governor, Gboyega Oyetola.

This reported observed that the judiciary system, which is in the world over, is regarded as the last hope of the common man and the branch of government responsible for interpreting the laws and administering justice has been left behind rotten.

After the state was created, the governor's office, ministries and the magistrate courts were situated at Baruwa area which is known as the ‘old Governor’s Office' now - while the State House of Assembly was located for years at Olonkoro. The government house was placed at Oke-fia, Annex Osogbo for years.

Consequently, the Government House was moved to its permanent place in GRA, Oke-fia; the Governor’s House and the ministries were moved to Abeere, Osogbo while the l State House was also moved to its permanent place, along Abeere - the Magistrate courts were left at the Old Governor’s Office until Ex-Governor, Rauf Aregbesola moved them to High Court complex in Oke-fia when he wanted to construct a modern market on the land.

The Magistrate courts since then have been sharing courtrooms. Press reliably gathered that only court one has its own courtroom while other magistrates share place and days for each other. This is rendering the judicial system ineffective and causing delay in the dispensation of justice in the state.

In the 2020 budget of the state; for Security, law and justice sector, the Osun State House of Assembly approved N247 million for capital expenditure while N134 million was budgeted for the sector. While the budget for the Governance and Administrative sector got N1.5billion in 2021.

A judicial worker in Iwo told this reporter that the electricity company cut their light due to unpaid debt. "It was like that for 10 years before Oluwo paid the debt and reconnected the light. He also put some furniture in the court because there was no seat in the court then. The dictionary we are using now was bought by a Magistrate"

Poverty on the wheel of Justice

On Friday, June 5, 2020, Governor Gboyega Oyetola presented 12 Toyota Jeeps to High Court judges in the state. The governor while presenting the cars claimed that since he assumed office, no arm of government deprives the other of benefits or gains, adding that there are no tendencies to subjugate either of the three arms since his assumption of office.

Press observes that all criminal cases will begin in the magistrates’ court and only a small percentage of the most serious ones will be referred to the High court. But there are reports of imbalance treatment between the High and the Magistrate court in Osun.

Magistrate attend to sensitive cases but the government submit their life to danger as no orderly officer is attached to any of them in Osun State except for court security that their job is only in the court.

A source told this reporter that the salary scale of a Magistrates in Osun State is worrisome. A Magistrate takes home about N120,000. A Magistrate who confided in this reporter and pleaded anonymity said the Magistrate allowance was last paid four years ago. The magistrate added that other little allowances such as fuel and driver allowance, which are supposed to be on a monthly basis, are sometimes received four times a year.

"We have not received vacation allowance and wardrobe allowance in the past four years. Only fuel and driver allowance which are supposed to be monthly are also collected four times yearly.

"A magistrate office is not equipped. No television, no electronic research gadget. No research materials for the magistrate - the library has not been updated for years.

Speaking on the official car, he said, "In 2013, Glgovernment replaced official cars of some Magistrate while most didn’t get. They were given an official plate number. One of the things that have to be taken care of is selection of high court judges — life as a Magistrate in Osun could not be compared to our colleagues in other states. There is no guarantee that 20 percent of magistrates will graduate to High Court judge due to imbalance in selection and appointment of judges," the Magistrate said.

A lawyer who is based in Osun State, Barrister ‘Dele Abbas generally berated the way the Judiciary system has been treated in the country.

The judicial system generally in Nigeria is terrible. I don’t know what is happening, the money given to the judiciary Isn’t enough to take care of the various courts. "So, I don’t know how much had been allocated, I don’t know, but what the then CBN said was that they should increase the allocation, so that they can do all the necessary things like some of our courtrooms that are leaking.

"Some of these buildings, if you go round Osun State, they have been there for a very long time even before they were allocated to court and sometimes when you are in the court during the rainy season, you will see water coming down on the lawyers, in some of the jurisdictions, lawyers will take it upon themselves. Let me give you an example of Iwo, when we completed the NBA Owo branch, they contributed some money and they put some things in place, like they bought fans, they bought generators to support the system.

"The state of our courts at present is nothing to write home about. Before Aregbesola left, he didn’t do anything about the judiciary at all. We complained several times and he didn’t even answer. I don’t know what happened, and we know how much we pay in court when we want to file some cases. Judiciary generates a lot of money for the state yet the state doesn’t deem it fit to assist the judiciary.

"Then you know when you have Magistrate, you have High court, so magistrate being the dock of criminal matters and honestly, they are not being motivated at all, the magistrate I’m talking about, I think some of them are those that were employed in 2012, there’s no vehicle, the state did not provide a vehicle for them, so they have to look for vehicle themselves, no driver, so you expect that person to perform optimally? You expect that person to have integrity, so if they were offered money, you don’t expect them to take it? So if you don’t motivate them, you don’t give them what they deserve, then how do you expect them to give good judgment? It’s not possible.

It’s very annoying. You see some of these magistrates when they enter a filling station, you can imagine a magistrate buying a fuel of N1000 - it’s embarrassing; it’s not his fault, - that is what he has.

The lawyer, in spite of that, called on the government to look in that area, which As stated by him is very critical "because this sector is very important. If we want good judgment and justice in the society, honestly, those people have to be taken care of," Abbas concluded.

ffort to get the reaction of the Court Registrar proved abortive as he declare a comment on the report, saying he is not allowed to speak with journalists.