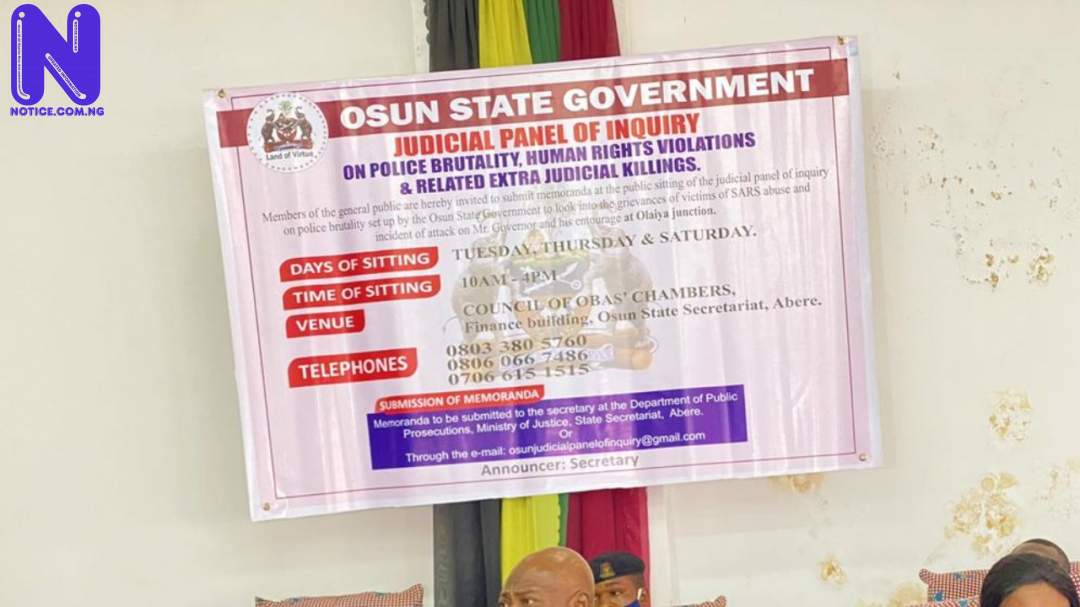 The Judicial Panel of Inquiry on Police Brutality, Human Rights Violations and Related Extra Judicial Killings, on Friday, ordered a subpoena compelling two officers of the Nigerian Security and Civil Defence Corps (NSCDC) to appear before it for being allegedly involved in the killing of one Master Idris Ajibola on September 15, 2020.
The panel also ordered the State Ministry of Justice to provide relevant documents in respect of the petition filed by one Mrs. Oluwatoyin Adetona whose kids were allegedly murdered by Police officers in Ilesa, Osun State, in 2016.
Press recalls that the parents of the late Idris Ajibola had approached the panel to seek justice in the gruesome murder of their son who was allegedly chased to death by the members of the Joint Task Force comprising soldiers, police, DSS and NSCDC officers.
The deceased alongside two other occupants who were in the car on the day of the incident were allegedly being chased along East-pass Dual Carriage Circular Road, Osogbo, by the Joint Task Force (JTF) personnel.
It was reported that the car of the chased victims swerved off the road and rammed into a ditch and crashed leading to the instant killing of the deceased.
When the case was returned for further hearing on Friday, the counsel for the petitioner, Barrister Kanmi Ajibola, filed an application and prayed the panel to order the appearance of the two identified NSCDC officers who were among the JTF personnel that were involved in the incident.
He said the appearance of the two erring officers would aid the investigation and give support to the prosecution of the case as the petitioner was able to identify them by name.
In his ruling, the Chairman of the Panel, Justice Akin Oladimeji (rtd.) granted the application and ordered the two erring officers -Inspector Jimi Awoniyi and Togun Babatunde -to appear before the panel on March 5th, 2021, the adjourned date.
Justice Oladimeji ordered the immediate issuance of subpoena to the two officers for them to appear before it for defence on the adjourned date.
He said the appearance of the two officers would give more credence to the defence of the case and further strengthen the principle of fair hearing and equity that has been the hallmarks of the panel.
Justice Oladimeji however adjourned the case to March 5th, 2020 for further hearing.
Similarly, the panel ordered the Ministry of Justice to provide all the necessary documents regarding the prosecution of the case filed by one Mrs. Oluwatoyin Adetona against the Police.
Mrs. Adetona approached the panel to seek redress in the murder of her two kids by Police officers in Ilesa.
Adetona had in her petition alleged that two of her children were killed by police officers who drove recklessly at her residence in Ilesa.
She explained that the deceased who were playing in the front of their house were killed by the electric pole hit by the Police Patrol Vehicle.
The mother of the deceased, who had prayed the panel to prevail on the police to fish out the killers of her kids, said she was not convinced that the erring officers had been brought to justice as claimed by the police authority.
Ruling in the case, Justice Oladimeji ordered the Ministry of Justice to provide all the necessary documents in respect of the case to enhance smooth prosecution just as he ordered the Police authority to provide relevant documents to substantiate the status of the alleged officers if truly they have been dismissed by the police.
The panel disclosed that it had concluded 21 cases out of the 34 cases before it.
According to the panel, 10 cases out of the finalised 21 cases are awaiting final recommendation to the government while the remaining 11 were struck out on the basis of different irregularities.
The panel further revealed that 13 cases had reached different prosecution stages just as it reiterated its commitment to dispensing justice before the stipulated time allocated to it.
The cases heard by the panel on Friday were: OS/JPIPB/08/2020 Chief Adegboyega Agbaje & 1OR versus Osun State Commissioner of Police; OS/JPIPB/12/2020 Alhaji Dele Nafiu versus Osun State Commissioner of Police; OS/JPIPB/27/2020 Mr. Ibrahim Olagoke versus Osun State Commissioner of Police; OS/JPIPB/01/2020 Alhaji Ayo Dauda Adigun & 1OR versus Osun State Commissioner of Police; OS/JPIPB/11/2020 Mr. Kehinde Ajibola versus Osun State Commissioner of Police.
Others were: OS/JPIPB/28/2020 Mrs. Oluwatoyin Adetona versus Osun State Commissioner of Police; OS/JPIPB/31/2020 Good Governance and Leadership Assessment Initiative versus Osun State Commissioner of Police; to and OS/JPIPB/32/2020 Dr. Muyiwa Oladimeji versus Osun State Commissioner of Police