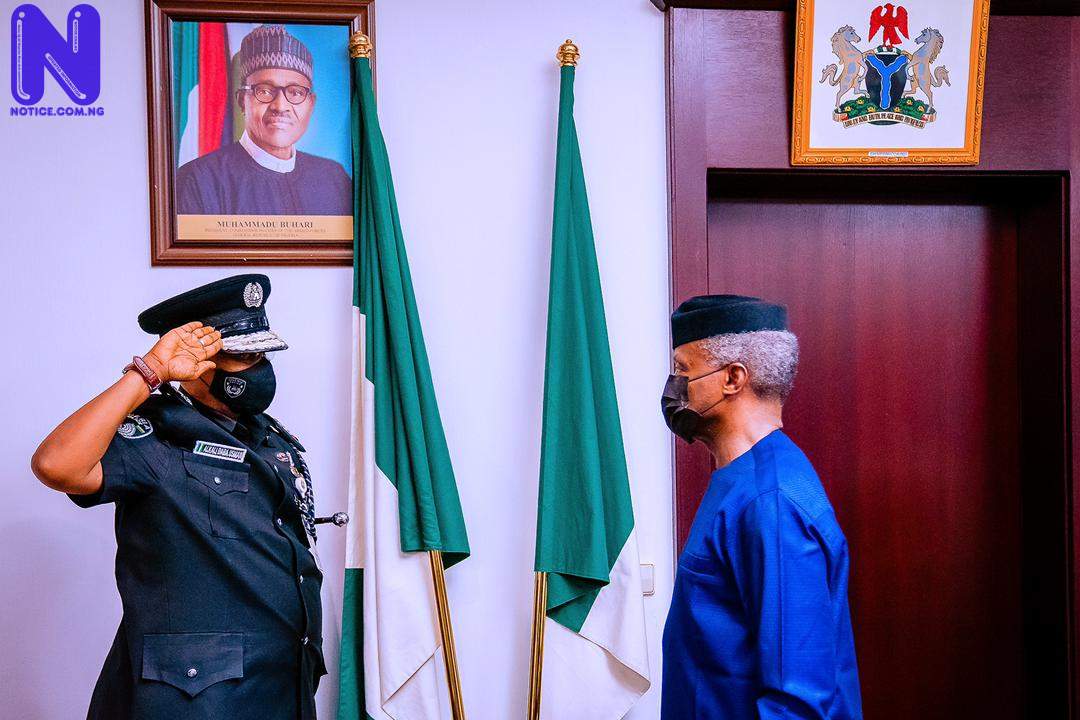 Vice President, Professor Yemi Osinbajo, has issued new directives to the new Inspector General of Police, Usman Alkali Baba.
The Vice President said the police force must work hard to regain the trust and confidence of the public by stamping out the excesses, abuses and culture of impunity exhibited by some elements within the police.
Osinbajo stated this on Wednesday at the decoration ceremony of the new Acting Inspector General of Police, Usman Akali Baba, at the State House in Abuja.
The Vice President emphasized that under the leadership of the new Acting Inspector General, “the police must now rebuild the broken bridges of trust with the public and regain the confidence of the citizenry.”
Continuing, Prof Osinbajo reiterated the need for community policing as a way of also securing the lives of Nigerian People and called for the implementation of community policing policy.
”Reconceptualizing policing as a task carried out in partnership with local communities and by officers who are members of these localities,” he explained
He noted that the welfare and working conditions of police officers must improve significantly and under the leadership of the Acting IG, officers “must live up to all of the highest standards of professional conduct and compliance to the rule of law.
“You must stamp out the excesses, abuses, and the culture of impunity illustrated by some elements of the force which provoke public outrage against the institution.”
The Vice President admitted that the Acting IG assumes his office at a very turbulent time in the life of Nigeria, ” noting “multiple threats to law, order and public safety.”
He said “the role of law enforcement and in particular, that of the Nigeria Police Force as the primary agency charged with maintaining law and order, has never been more important.”
Speaking about the new Police Act, Prof Osinbajo said, “last year, Mr. President signed the new Police Act, the first police reform legislation to be enacted in almost 50 years.”
“The Act is the centrepiece of our commitment to reinventing the police as an institution that we can all be proud of. It articulates this administration’s vision of a modern, competent police force as an institution committed to the preservation of human rights and human dignity and the protection of the public against all criminal threats.”
He charged the Acting IG to embark on a mission of restoring “the dignity and high repute of the policing profession, adding that the Buhari administration “stands ready to work with him to reposition the Nigeria Police Force and take it to unprecedented heights of professionalism, competence, and excellence.
“I, therefore, welcome you as a key partner in this administration’s comprehensive programme of reform aimed at repositioning the NPF as a modern, responsive, and citizen-centred law enforcement service.”
The Vice President also noted that the selection process of the new Acting IG by the President is different from past practice “when the selection of a new Inspector General of Police often meant the immediate retirement of a cohort of senior police officers whose vast experience and training would no longer be available to the country.”
Also present at the decoration ceremony were the Secretary to the Government of the Federation, Mr. Boss Mustapha, Minister of Police Affairs, Mohammed Maigari Dingyadi, the Ex-Inspector General of Police, Mohammed Adamu, and other top government officials.