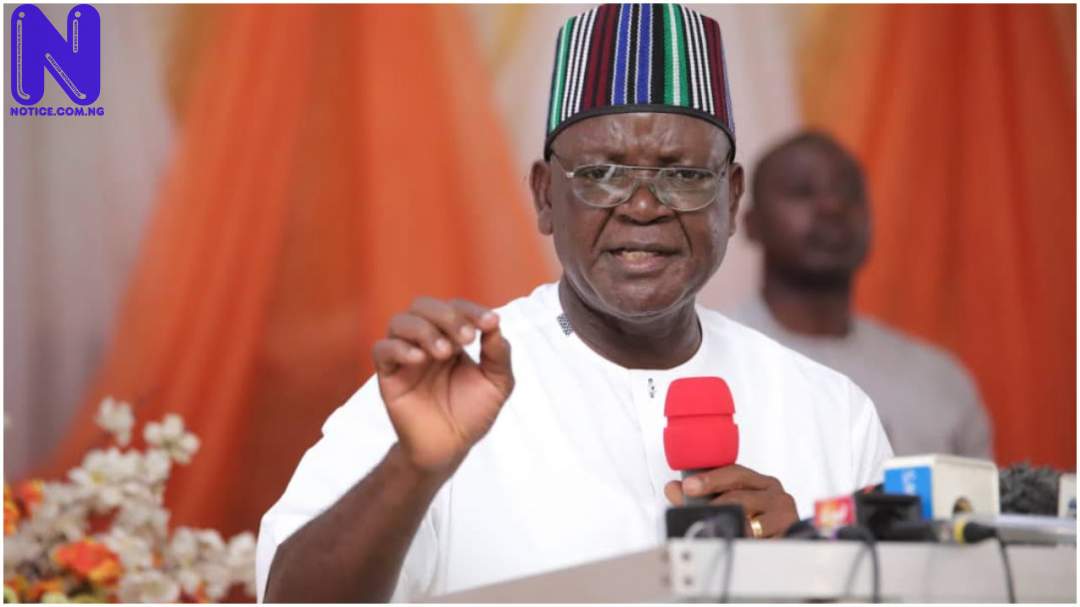 In the last one week, Benue State Governor, Samuel Ortom has met in London, the United Kingdom with those whose voices are not taken for granted on issues of global peace and security. The Governor is deeply worried over the fate of hapless Nigerian People who are killed on a daily basis. He is particularly concerned about the persecution of Christians and the general muscling of religious freedom in his country where clergy men have become the target of wanton kidnappings and assassinations.

Reports from London indicated that Governor Ortom met with several personalities such as Baroness Cox of the UK House of Lords, MP Fiona Bruce, Special Envoy on Religious Freedom, her Deputy Ex-MP David Burrows, The Archbishop of Canterbury, His Grace Most Revd Justin Welty, Dr. John Eibner (Switzerland), Pastor Ayo Adedoyin, PSJ, UK, Dr. Richard Ikiebe PSJ and The Revd Dr. Gideon Para-Mallam of The Gideon & Funmi Para-Mallam Peace Foundation, whose organization was one of those that invited the Governor to the UK.

In his meeting with the Archbishop of Canterbury, Head of the Church of England, the Most Revd Justin Welby, the Governor spoke on the suppression of religious freedom and persecution of Nigerian Christians among other silent issues affecting the marginalized people of his country. Responding, Archbishop Welby described Governor Ortom as a man of uncommon courage who is truly moved by love for his people to seek help for them. He offered prayers for the security and peace for the people of Benue State and Nigeria at large.

DO YOU KNOW >>> Aba flood flows from corruption - Emmanuel Onwubiko

Governor Ortom also paid a visit to the Westminster House of Lords and witnessed its session when Baroness Cox raised concerns on the killings in Nigeria. The Governor briefly sat in during the debates in the House of Lords on the invitation of Baroness Cox. He met with Dr. John Eibner, President CSI, Switzerland, in company of Revd Dr. Gideon Para-Mallam of the Gideon & Funmi Para-Mallam Peace Foundation: President and CEO, the Gideon & Funmi Para-Mallam Peace Foundation; who was a delegate at FORB and had accompanied the Governor from Nigeria.

The Governor equally met with the Deputy Envoy MP Burrows at one of the Conferences. Recall that when seven members of the UK Parliament came on a fact-finding visit in Nigeria at the end of May 2022, Governor Ortom was one of the two Nigerian Governors they met privately. The All Party Parliamentary Group (APPG) visit to Nigeria was led by David Burrows.

Ordinarily, Ortom wouldn't have bothered because as a governor, personal security is guaranteed 24hours of the day. So why is the Benue Governor taking the pain to draw the attention of the international community to the evil taking place in Nigeria? That is where the distinction and measure of a man's content of character is known. Leadership entails being selfless and thinking about those you lead. In Ortom's case, he is not only concerned about Benue people. He cares about the well-being, freedom, safety and justice for all Nigerian People.

Nigeria has produced great leaders who spoke passionately to the nation's soul to provide direction in curing the injustices that threatened the unity of the country. Leaders like Nigeria's Ex-Permanent Representative to the United Nations, the late Alhaji Maitama Sule and several others had spoken and provided solutions to the myriad of Nigeria's problems, but their words seemed to have fallen on deaf ears. Unfortunately, Nigeria's unity is on the verge of collapse again. The signs are glaring, but those who can save the country are either not reading the signs well or are not seeing them at all.

Religion, ethnicity and politics have masked most political leaders, barring them from speaking the truth to save the country. in spite of that, concerning lily-livered leaders, there has been a brave one diagnosing Nigeria's current situation while proffering solutions. He has also made several strong statements that could have saved the country if only those who should act had listened to him. Ortom's patriotic statements were dismissed, and today, the same statements of his have come to pass.

Governor Ortom of Benue State is writing his name on the sands of history as one of the great leaders of this country who stands for justice and truth, equity and fairness, and one who has the vision to forecast what would become of a situation if the right steps are not taken. I am not saying he is a prophet, but if after reading this you find him fit into what qualifies one as a prophet, then we will be on the same page.

Only two weeks ago, Governor Ortom spoke on two television programmes – Arise News and Channels TV. He stated unequivocally that if nothing is done to arrest the worsening insecurity in the country, one day soon, terrorists will take over the Presidential Villa. Some Nigerian People found his statement as a prophecy of doom. In fact, Channels TV host Seun Akimbaloye openly disagreed with Governor Ortom in strong terms. The Governor was not deterred as he went on to state his case courageously and proffered the way forward. A few days later, terrorists attacked the Kuje Prison and freed hundreds of inmantes among who were their members. That was Ortom's prediction coming to pass faster than anyone would have imagined. Even those who doubted his warning about the possible attack on the Villa are now speechless.

To bring Governor Ortom's warning closer home, President Muhammadu Buhari's advance team was attacked right in the President's home state Katsina by terrorists. What affront can be more worrisome than that? Those who had thrown darts at the Benue Governor have now put their tails between their legs.

In 2015, Governor Ortom after carefully studying the Fulani herdsmen attacks on farmers in Benue State, came up with the novel solution of ranching and the banning of open grazing in the state. Through the enactment of the Open Grazing Prohibition and Ranches Establishment Law, 2017, Benue bade farewell to open grazing to welcome ranching. in spite of that, the backlash the Governor received was from just one ethnic group, the Fulani tribe who have taken open grazing as a way of life and would not like it changed. Through their social-cultural groups: Miyetti Allah Kautal Hore and Miyetti Allah Cattle Breeders, Fulani Nationality Movement, and other Northern elites and governors, they opposed the ban on open grazing with threats of attacks on the state, which were carried out unhindered even as the President and security agencies were timely alerted by Governor Ortom. He predicted that one day, ranching will be accepted the same way that June 12 has today been accepted as democracy day! It has come to pass.

The opposition could only last for a while because today, they are singing the Ortom song of ranching. They have all agreed with Governor Ortom that Open grazing is not practicable in the present circumstance of Nigeria. Northern Governors Forum in February 2021, resolved that open grazing was out of date. Contained in the forum's communique, it reads: "The current system of herding mainly through open grazing is no longer sustainable, in view of growing urbanization and population of the country." The forum only repeated what the Benue Governor had said a few years ago which they opposed.

Today, the ranching crusade led by Governor Ortom has reached the nooks and crannies of Nigeria. All the regions, North, South, East have banned open grazing as many of the States have signed into law the Anti-Open Grazing law with several other states in the process of doing the same.

While the attacks by Fulani herdsmen were heavy on Benue State with the denial from the Presidency that those attacking Benue were not Fulani herdsmen but bandits, Governor Ortom warned that if nothing is done fast the so-called bandits will be difficult to contain in the near future. Today, the reality is here. Fulani bandits have become more vicious than Boko Haram and even President Muhammadu Buhari's home state is not spared from terrorists' deadly operations of killing, kidnapping and shutting down the economies of many states.

The ‘fight' against banditry by the Federal Government has been treated with kid gloves which is why they have continued to fearlessly operate on Nigeria's territory unchallenged. Just like the Federal Government was quick to proscribe Indigenous People of Biafra, IPOB, and declared it as a terrorist organisation, Governor Ortom has demanded that the gun-wielding Fulani herdsmen who are today nicknamed bandits be declared as a terrorist group which after all is the fourth deadliest terror group on the Global Terrorism Index. In the usual way of the people from the North, particularly, Fulani and the Presidency, they came on Governor Ortom as a lion going after its prey.

When Governor Ortom advocated licensing of AK-47 to private individuals for self-defence, it first appeared as though it was an unpopular opinion. Of course, Ortom knew what he was saying. He foresaw things soon getting out of hand as the situation has now got worse. Just like his other patriotic calls which took time before the authorities accepted, it does appear that it would only take some time for licensing of guns for private individuals to begin in Nigeria. Now, you can call it ‘Ortom: The making of a true prophet'.

Shockingly, the Presidency and other members of the All Progressive, APC, both at the Federal and state level have baselessly regarded Governor Ortom as an enemy of Buhari when he speaks on issues concerning Nigeria. How is Ortom an enemy of the President? When did it become an offence to look your leader in the face and tell him where he is wrong and where he is right. Governor Ortom has, on several occasions, commended Buhari when he does the right thing. But the Governor also owes no one any apology when he tells the President where he is wrong.

In my opinion, Governor Samuel Ortom is the best friend of Buhari who wants him to succeed. Those who flatter Mr President with lullabies to lure him to sleep while Nigeria burns are the real enemies of this country, not Ortom.

When Governor Ortom said the President is the worst President regarding issues of security and keeping his promises, there was a media buzz and the Presidency almost rolled out the entire weaponry to crush Ortom as if he was wrong. Ortom is right. The President has failed on all fronts.

It is worthy of note that when the Benue Governor speaks, he speaks the minds of the majority of Nigerian People and from the information at his disposal. Governor Ortom's position has been

Governor Ortom has stood out as one of the outspoken Governors in the times where many have recoiled into their safe havens for fear of losing power and money. The Benue Governor is the crusader of justice for all, the justice the country needs to correct the many decades of impunity, injustice, marginalization and subjugation. Governor Ortom speaks from the vantage point of one who is concerned about the unity and progress of the country and he has said a lot that were ignored but have come to pass as the country battles with the grave consequences of its negligence, the negligence of the voice of reason.

Governor Ortom's trip to the United Kingdom and his call for religious freedom in Nigeria is not only timely but it is also another patriotic call that will yet again yield fruits for the people of this country.