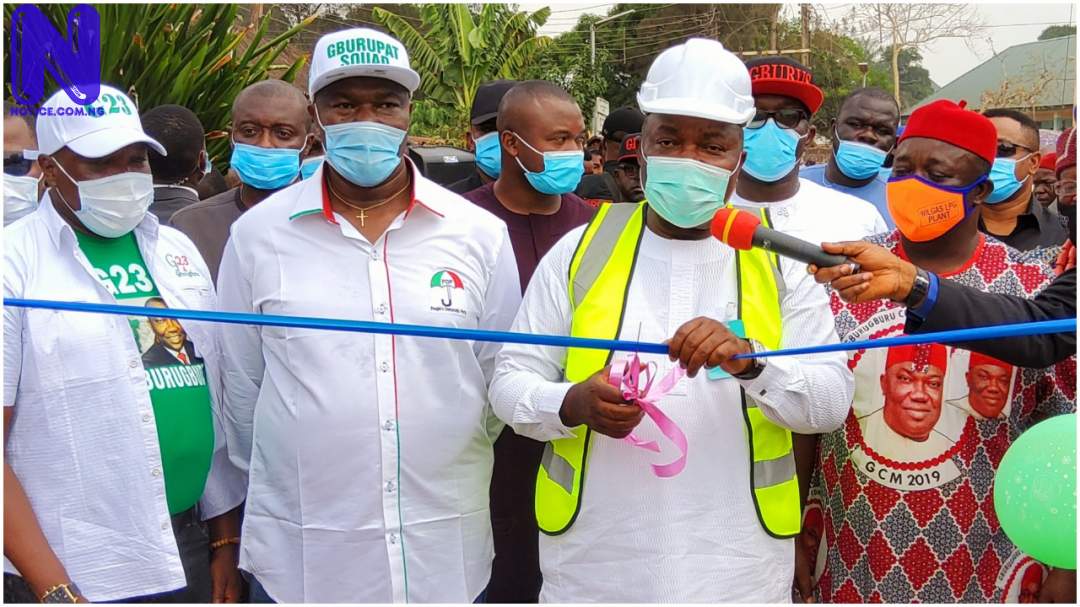 Political and traditional leaders in Nsukka/Igbo-Eze South Federal Constituency, on Sunday, hailed what they called a working partnership between Governor Ifeanyi Ugwuanyi of Enugu State and Rt. Hon. Pat Asadu.
Asadu is the lawmaker representing Nsukka/Igbo-Eze South in the House of Representatives.
The leaders from the area made their feelings known during the commissioning of some road projects attracted by the lawmaker, as well as the distribution of some empowerment and Christmas gift items to the constituents.
Press reports that Governor Ugwuanyi commissioned some of the projects before his entourage arrived at the Adada House, Nsukka, venue of the event.
Speaking, a Ex-Chairman of the Peoples Democratic Party, PDP, in Enugu State, Engr. Vita Abba said he was impressed with the cordial relationship between Governor Ugwuanyi and Asadu.
“I hail the Governor the way he is working with Asadu; they are working together and we are delighted about that.
“The royal fathers are witnesses to what is happening today; Pat is our son; we are telling, Your Excellency, the Governor today that we stand as surety, Nsukka and Igbo-Eze South, Pat is our son, we hand him over to you, work well with him to fix Enugu State.
“We have been patient for Hon. Asadu and I think he is showing us today that the patience is not in vain,” Abba said.
On a similar note, a Ex-Secretary to the Enugu State Government, Dr. Dan Shere described the event as “a demonstration of the universal brotherhood of Nsukka people.
“What we are seeing today shows that the Governor has a good team, what we saw today is a united Nsukka, togetherness.
“I thank the Governor for his support, we shall remain one,” he declared.
On his part, the chairman of the Enugu North Senatorial Zone Council of Traditional Rulers, His Royal Highness, Igwe S.N. Ezeh noted that, “we are seeing all you people are doing, we are behind Gburugburu (Gov. Ugwuanyi), we are behind Pat Asadu.”
In his speech, Hon. Asadu commended Governor Ugwuanyi for his commitment to the progress of the people.
“Part of the reason for this event is one to thank the Governor for the good work he is doing in Enugu State. Secondly, to thank our people for their support.
“A lot has happened this year, COVID-19, End SARS, yellow fever, but God kept us alive. So we decided to sit down today to thank God and to celebrate.
“Nsukka people are known for oneness, they are known for one voice, anywhere we are going, we always go together; at this point in time, the Nsukka man has decided that where Ifeanyi Ugwuanyi is going that that is where he is going.
“We were in Nsukka High School, Your Excellency, you saw Nsukka, you have come to Nsukka/Igbo-Eze South and you have seen Nsukka, we are one,” he said.
“We have six Siena vehicles which shall be handed over today, starting from the chairmen of our party in the Local Government Areas. Each of the ward chairmen in the 36 wards will also go to with a motorcycle, then each of the communities in the two LGs will also go home with two motorcycles to support the Governor’s security efforts, in the area of forest guard, neighbourhood watch and the rest. If anything happens in the night, they should be able to move around.
“As the Governor was going round, I showed him about 800 people we trained, each of them will go home today with the sum of N50,000 to go and start something, our hope is that by next Christmas some of them will be giving testimonies to show that they didn’t drink it away.
“Whatever we are doing in Agbamere, Eha-Alumona, whatever we are doing in Nru, whatever we are doing in Uhu-na-Owerre, among other places, is possible because the Governor has told us to go to Abuja and hunt, don’t worry about the home, I will protect it, and he has indeed been protecting the home effectively. So, we thank you, your Excellency,” Asadu added.
He equally announced cash donation for various categories of people. Clothing and food items were also distributed at the event.