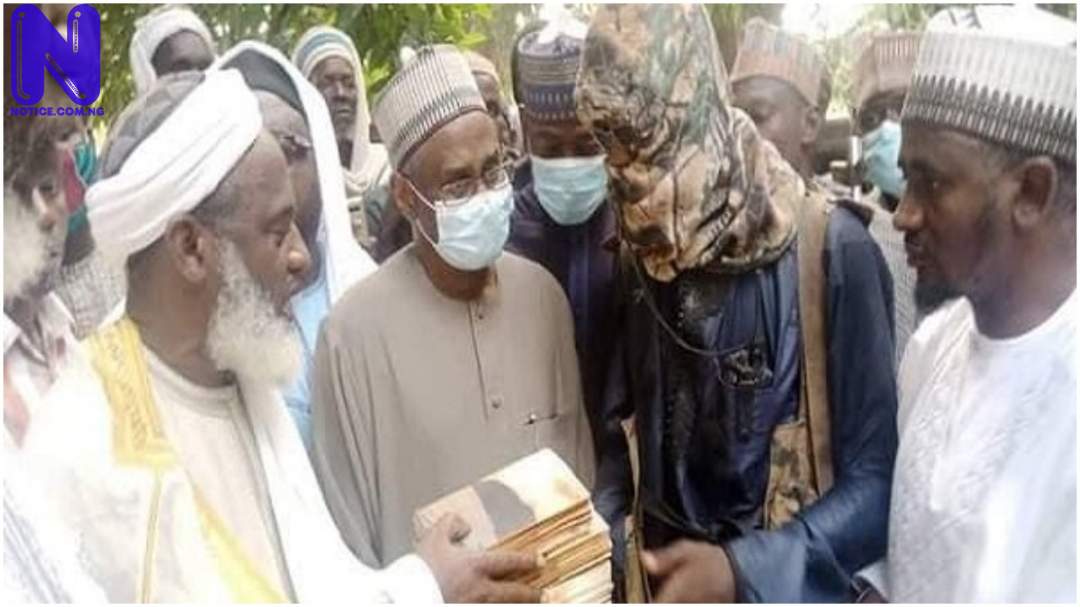 Nigerian People bicker over Sheikh Gumi’s role with bandits
The renewed troubleshooting of renowned Kaduna-based Islamic scholar, Sheikh Ahnad Gumi, has continued to cause controversies among Nigerian People, especially on the social media platform, Twitter.
Nigerian People were first piqued when reports and images surfaced online of the meeting Gumi had with two sets of bandits in forests in Zamfara State.
In the images that accompanied the reports, the Islamic cleric was seen with heavily armed bandits, who gleefully told him that they took up arms because of the certain injustices done to them by the Nigerian state.
The images took many aback, as they wondered how a band of bandits can boldly display their criminality and why a respected cleric like Gumi would openly associate with them.
Even more disgusting to many Nigerian People, who have expressed their feelings online, is the continued advocacy the Sheikh has mounted since his first meeting with the bandits in Zamfara forests.
The cleric, in several interviews, had called on the Federal Government to grant the bandits amnesty, insisting that the bandits are victims of injustices brought about by the Nigerian state. As stated by him, the armed bandits are responding to the killings of their people by the military and rustling of their cattle by rustlers, without protection from the government.
The anger and discontent expressed by Nigerian People online however took a new dimension reports and images appeared of the Sheikh Gumi’s meeting with bandits the alleged abductors of students and staff of Government Science College (GSC), Kagara, Niger State, in apparent negotiation for the release of the abductees.
As expected, Nigerian People took to social media, especially Twitter to vent their anger and disapproval of what they termed as his romance with criminals, while others hailed him for volunteering to negotiate and secure the release of the victims.
Below are some of the reactions of Twitter:
@sadiqTade wrote: “Sheikh Gumi seems to know more about bandits (terrorists) in the northern states judging with his recent engagements with these people. I don’t know if he is doing the right thing or not but I feel something isn’t reasonable about the whole thing. More like encouraging Terrorism.
“On a regular day, Buhar-led administration has done so much to give confidence to terrorists. Although these terrorists with sophisticated weapons are being paraded as Bandits in the media maybe for politics. in spite of that, the fact remains Buhari admin has emboldened these criminals.
“You can’t keep negotiating with this dangerous set and keep expecting positive change or something related. Rewarding, negotiating or dialoguing with criminals would only encourage potential criminals to dive into full criminality because they are aware of the juicy rewards.”
@Dan99st wrote: “They kidnap and get compensated. They are just using the masses to finance their agenda. Later on, they get pardoned because they’re “reformed”. All of this is wrong.”
@Aitemej1 wrote: “From the presidency to the governors to the legislators to the sheiks/other Islamic scholars, to the traditional rulers, to the religious leaders and many elites in the north nothing is hidden in all these dramas.
In fact, many are key actors and are just trying to fool Nigerian People”
@Matru wrote: “Na middleman business Sheik dey do. Him dey collect him share after every transaction”
@NNWaebiem said: “If they are not encouraged to keep kidnapping people, how would they implement the much needed Northern Amnesty? Remember, Federal Character is enshrined in our constitution. I said it and nothing will happen!”
@emekakickoff said: “Am so surprised. When I listened to his call in a telephone conversation guest @RaypowerNetwork I was hummmmm, so bold with his talk. Something seems not right at all.”
@Matrumery wrote: “He wants to be chopping middleman money when the government and bandit negotiate.. it’s business for him. He collects his share as mediator”
@the_olanrewaju said: “Balance me quick, how did he locate the bandits? What intelligence does he have that the security agencies don’t? Questions begging for answers.”
@Kingjoey said: The Gumi’s style will breed more insurgents. There is nothing better about it. Am beginning to suspect that Boko Haram, Gumi’s ‘Children’ are still the bandits. Kwatiniu, God will judge leaders of Boko Haram masquerading like Clerics of God
Despite the misgivings expressed by some Nigerian People, others are of the view that the respected cleric is doing a great job by interfacing with the bandits.
The grandson of second Republic President, Bello Shagari, tweeting with the handle @belshagy wrote: “Instead of being seen as a brave cleric facing these criminals face to face, Sheikh Gumi is seen by those who misunderstood as either the northern interest, government agent and sometimes even as criminal himself.
“He is just a volunteer working on his own.
“Yes you can compare Sunday Igoho with Sheikh Gumi in the sense that they are intervening.
“However, while Sheikh is calling for peace, Sunday is calling for war.
“The sheikh is not inciting anyone unlike Sunday openly does.”