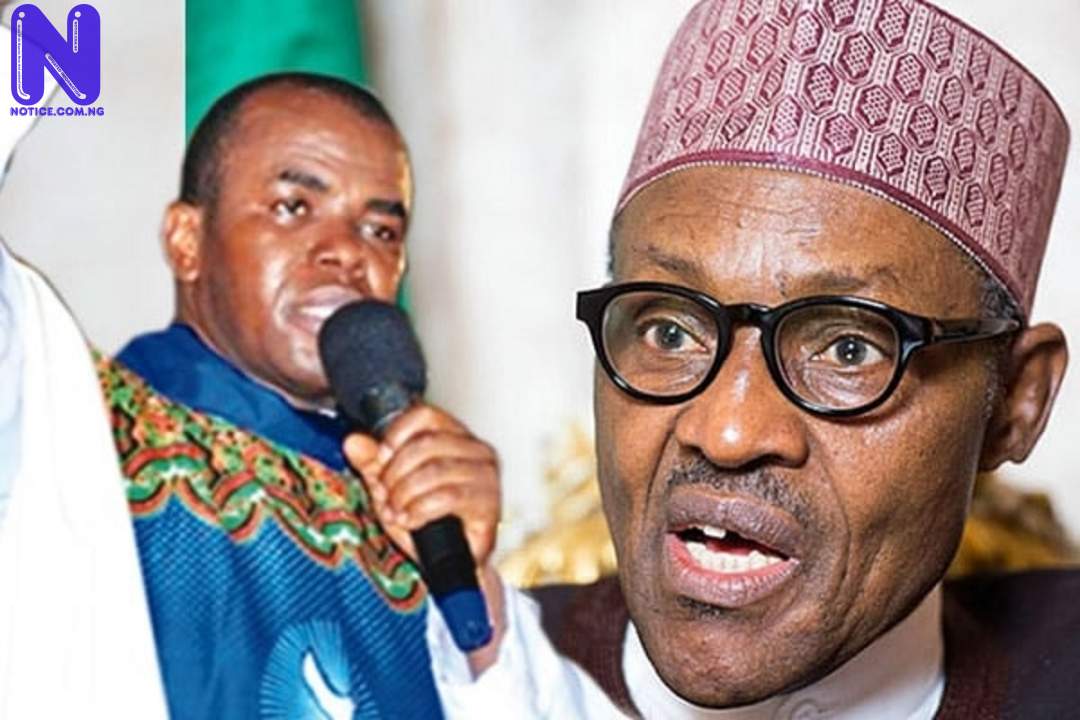 Nigerian People have continued to react to a call for the National Assembly to impeach President Muhammadu Buhari if he fails to resign from office over the current state of insecurity in the country.

The call was made by the controversial Catholic priest, Rev Father Ejike Mbaka of the Adoration Ministry, Enugu, a hitherto staunch supporter of Buhari and his All Progressives Congress (APC).

Mbaka, while calling for the President’s impeachment on Wednesday during a worship service, said it was sad that Buhari could maintain what he called a graveyard silence in the midst of killings and deaths in the country. He insisted that Buhari might have lost touch with realities.

He also argued that no civilised leader could have remained in power with the level of violence and deaths being witnessed in the country.

“How can people be dying, the chief security officer of the country will be sitting down without making any comment.

“Gunmen attacking people everywhere. Buhari should have resigned honorably following his failure as a leader. Let me tell you if it is in a civilized country, by now, Buhari will resign with what is happening. So it is amazing that he has chosen to sit tight while people are dying anyhow”, the priest said.

Citing the precarious conditions under which citizens are operating currently with poverty and insecurity, Mbaka added: “Nigerian People are crying because there’s no security in the country. The National Assembly should impeach the president if he doesn’t want to resign.”

Pre-empting the expected backlash from his call, the priest warned members of the National Assembly against failure to impeach the President and attacking him, saying “…something worse than what they can never imagine will happen to the members.”

As envisaged by Mbaka himself, reactions have trailed his call for the impeachment of the President, with some, especially supporters of the ruling party calling for his head while others mocked him for his ‘failed’ prophecy for saying President was the ‘messiah’ Nigerian People were waiting for. Others, in spite of that, praised him for his courage to speak up despite his well known support for Buhari.

The ruling party, APC, its reaction showed that the honeymoon that existed between them was truly over, as it advised the clergy to allow politicians handle political messages.

Threatening to report Mbaka to the Pope, the APC described his call for the President’s impeachment as ungodly, claiming that the priest was only looking for personal benefits.

In a statement by its Deputy National Publicity Secretary, Yekini Nabena on Friday, the party said the priest was supposed to use “all known spiritual means of averting crisis rather than threaten a democratically elected government for his benefit while pretending to be speaking for the people.”

The party also charged the priest to emulate other clergymen like Pastor Enoch Adeboye of the Redeemed Christian Church of God (RCCG) and Pastor WF Kumuyi of the Deeper Life Bible Church, who have turned on to prayers for the country.

“It is unfortunate for a man of God who is supposed to deploy all known spiritual means of averting crisis but rather threatening a democratically elected government for his benefits while pretending to be speaking for the people.

“One would wonder who Father Mbaka is emulating because the Lord Jesus Christ did not threaten to bring down the government during his own time, in fact, Jesus Christ obeyed and honoured constituted authority. That’s why he paid his tax.

“We are calling on Father Mbaka to concentrate on his spiritual calling and stop speaking like politicians who it is obvious he (Mbaka) has been dining and wining with. If Mbaka has found another political ally, it is better to leave a political message for politicians.

“Calling on President Muhammadu Buhari to either resign or be impeached because of the current challenges is ungodly. Father Mbaka should not, in spite of that, take his luck too far because there is a lot to tell the Vatican and the Pope about his person and his sources of inspiration.

“Emulate the likes of Pastor Enoch Adejare Adeboye of the Redeemed Christian Church of God RCCG and Pastor WF Kumuyi of the Deeper Life Bible Ministry and many other true men of God who will rather fast and pray to avert a disaster in the country instead of threatening the government of the day”, the APC said.

Though it is understandable that the APC would naturally be angry over the call for the impeachment of the President, especially for a political ally, who might have ‘new political allies’, it is, in spite of that, yet unknown the ‘a lot to tell the Vatican and the Pope about his person and his sources of inspiration’.

As allies since 2015 until lately, the APC obviously may be privy to certain information about the person and sources of inspiration of the Catholic priest the Vatican and Nigerian People are not aware of. Whatever that may be, there is sure to be some interesting back and forth in the days ahead, as Mbaka is not a man known to take a hit and shy away from an appropriate response.

While Nigerian People await the soon to become blockbuster soap opera, they have started reacting, offering different opinions and views on the call by Mbaka.

Taking to the microblogging site, Twitter, @Sotonye0127 said it would have been faster for the priest to rewind under his role in bringing Buhari to office than calling for his impeachment.

He said “Does Fr Mbaka have to call for impeachment when he knows the role he played in foisting this calamity? Rewinding his role will have a faster result than the process of impeachment. Or doesn’t he trust his faith anymore”, while @Gen2Dom believes Mbaka was just being unduly slandered as he has the right to change his mind at anytime.

“It was not just Mbaka’s vote or his campaigns that brought Buhari to power. So stop this slandering attitude. He has the right to change his mind given good reasons. Even God who ordained Saul rejected him later when he began misbehaving”, @Gen2Dom wrote.

However, @lamSahaz failed to share the sentiments of @Gen2Dom when he wrote: “I could remember how this man fooled the whole east to vote for Buhari after collecting millions. British killed our dearest culture with Christianity knowing fully well that our culture is far mightier beyond their so called religion” while @louis_ibek believes “The man saw reasons to bless-up the courage of @MaziNnamdiKanu. … the cheap smears you are throwing at him can’t change the fact that he is speaking against injustice in killings in the land. Get the message and forget the popular opinion of u-turn on this bird app.”

@King_CEO, in spite of that, called to question the prophecies of Mbaka concerning Buhari, asking “Does it mean God lied to him? Politicians will always use religious leaders like tissues paper because of their greed for money and fame” while @EmeraldSceptre said: “When you tell people that religion has no business with politics, God does not take part in politics, he deals with anyone that interfere with his purpose, politician or not. That’s how all this men will keep speaking from both sides of their mouth.”

Sounding cynical, @Greenaetion said: “Let me tell this so called Mbaka that Buhari is going nowhere and the sky won’t fall. Buhari is prayer answered to his adoration assembly and his entire family”, while @MASTER_P97 called on Mbaka to resign before Buhari for false prophecy and misleading the people.

3rd_Rome, in spite of that, questioned the efficacy of Mbaka’s prophesies when he said: “I’m almost shocked this guy still had congregation; why Fr Mbaka no see our present predicament for vision? God told you to support who?; Are you tryna say God was wrong? It’s a shame you were used against your people”, while @fablani9 wrote: “As the money wey dey use buy his sense don finish. He don regain his sense.”

@p_Izue however believes Mbaka’s new posture has to do with the current state of insecurity in the South-East when he wrote: “The fear of unknown gunmen is the beginning of wisdom nothing more. God has never spoken to him rather dollars and naira has been speaking to him”, while @jngwobia1 said: The same @MBuhari the fake Father Mbaka told us God revealed to him is the messiah. I pity those that believe n follow this man. Hopeless Hope uzodinma has used him finish and stopped picking his calls.”

For @Dandippi, it was a good thing that Father Mbaka has found his voice in speaking against what is wrong in the country. He said: “360 u-turn from father Mbaka is in the right direction. Even prophet Samuel did same during the time of King Saul, when he (Saul) disobeyed God. Other well meaning Nigerian People should do same to the weak or lifeless president, since he can’t protect the life and properties of his people.”

For @philsike1, Father Mbaka has only made him proud as a Catholic. “Fr Mbaka has won me back. Am proud again to be a Catholic. I can now kneel before him and ask for God’s blessings. May the Holy Spirit forever find him a worthy priest of Jesus Christ, amen”, while @SIRKENOBIA believes Mbaka has not derailed from whatever he said kn the past. He said: “I could remember one of his messages when he said he will also criticize him when he’s not doing well.”

The Presidency, perhaps in a bid to discredit Mbaka’s impeachment call, has revealed that the Catholic priest only came up with the impeachment option after it turned his request for contracts as compensation for his support for the President.

Reacting to Mbaka’s latest position, a media aide to Buhari, Garba Shehu, said: “An outsider distilling the avalanche of verbiage, will be surprised that after supporting the President two times to win the Presidency, Father Mbaka has made a complete U-Turn, preposterously asking Buhari to resign or be impeached.

“Anyone familiar with Buhari knows that he doesn’t break the laid down rules in dealing with contracts or any other government business for that matter. He requested the appropriate authorities to deal with the matter in accordance with laid down rules.

“Inside the Villa, discretion prevailed, that if those pictures and requests were made public, the followers will turn against the religious leader. None of it was released. Now, this is what is eating Father Mbaka.”