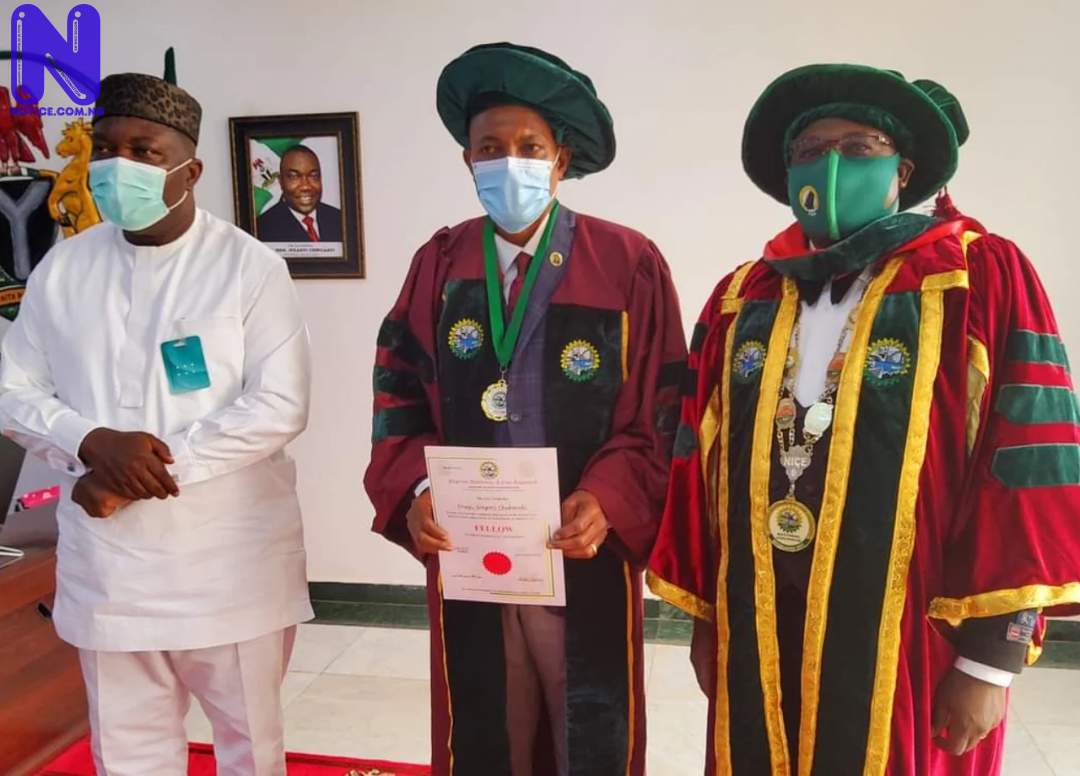 The National Chairman of the Nigerian Institution of Civil Engineers, Engr. (Dr.) Jang Chuhwak Tanko, has commended Governor Ifeanyi Ugwuanyi of Enugu State for the milestone achievements his administration has recorded in the state, especially in the area of infrastructural development.
Engr. Tanko who spoke when he conferred on the Enugu State Commissioner for Works and Infrastructure, Engr. Greg Nnaji, the prestigious Fellowship of the Institution, at the Government House, Enugu, told Gov. Ugwuanyi, who witnessed the event, that “I am highly impressed with your performance, especially in the area of infrastructural development”.
The Institution’s National Chairman also commended Gov. Ugwuanyi for his administration’s interventions on federal roads in the state, stating that the massive rehabilitation of the Opi-Obollo Afor section of the 9th Mile-Nsukka-Obollo Afor-Markudi federal expressway was a commendable feat.
Engr. Tanko who incidentally is the Director of Federal Roads Maintenance Agency (FERMA) in Enugu State, assured the governor that “we are ever ready to do our best to ensure that federal roads are maintained in this state”.
Decorating Engr. Nnaji, the National Chairman of the Institution disclosed that the Enugu Commissioner for Works and Infrastructure was carefully selected among other Nigerian Engineers to be conferred with the highest honour of the Institution.
He disclosed that “Engr. Nnaji is a very supportive Engineer in the country”.
Engr. Tanko explained that conferment exercise actually took place on January 21, 2021, in Jos, Plateau State, during his Investiture Ceremony as the 17th National Chairman of the Institution, adding that Engr. Nnaji could not attend the event because of exigency of duty, hence the decision to confer the honour on him in Enugu.
In his brief response, Engr. Nnaji expressed gratitude to Gov. Ugwuanyi for giving him the opportunity to serve the state as his Commissioner for Works and Infrastructure, revealing that the governor has proven himself to be a leader with “the Midas Touch”.
The Commissioner also extended his gratitude to the National Chairman of the Institution for finding him worthy of the honour and promised to do his best to ensure that engineering practice in the state in particular and the country in general is taken to greater heights.