Nigeria can no longer sleep because of insecurity, hunger fueling terror – Oyinlola, Mimiko 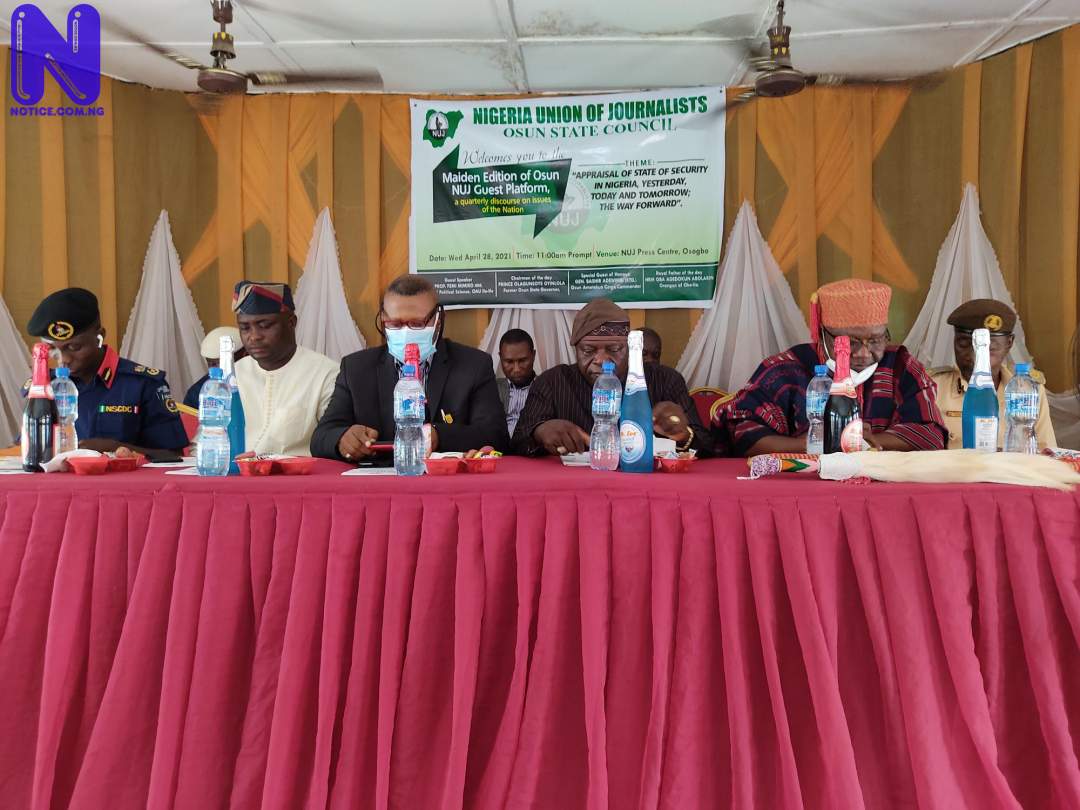 The Nigerian State has been overwhelmed by the myriad of security challenges confronting it and the most critical manifestation of that insecurity is the Boko Haram terrorist group.

This is according by Professor Olufemi Mimiko, a guest lecturer at the maiden edition of the Nigerian Union of Journalists (NUJ) guest platform with the topic, ‘Appraisal of State of Security in Nigeria, Yesterday, Today and Tomorrow: The Way Forward which held at the NUJ Press Centre, Osogbo.

Professor Mimiko said all the forces of insecurity are intricately webbed and cannot be separated.

He said the economic challenges facing the country is also part of the reason for the heightened insecurity adding that twenty-four million Nigerian People are unemployed and the poverty rate has risen to thirty-three percent.

The Chairman of the occasion, a one-time civilian governor of Osun State and military administrator of Lagos State, Prince Olagunsoye Oyinlola highlighted the factors responsible for crises in Nigeria.

The Ex-Commander of the Nigerian military contingent to Somalia said the Nigerian Constitution which still operates a unitary system suffers nepotism, ethnic favouritism, corruption, increased unemployment, which were all inimical to its growth and progress.

Oyinlola who revealed that he had on many occasions interrogated the security situation in the country wondered why insecurity has taken the front burner in the national discussions.

He recalled that as a Brigade Commander in Borno State, he once suggested that schools be built for Almajiri children, an idea which was opposed by a serving Commissioner.

“I warned that if the children should grow up without means of employment, they will fend for themselves.

“This has become prophetic because nobody is sleeping in Nigeria today.”

Oyinlola explained that mass illiteracy and a badly damaged federation was also contributing to the lingering situation problem in Nigeria.

Oba Adedokun Abolarin, the Orangun of Oke-Ila Orangun in his remark blamed the Nigerian elite for their greed accusing them of amassing wealth which has resulted in security challenges in the country.

The royal father warned that in the foreseeable future, there may not be any country called Nigeria.

In his words, “As a person, I don’t enjoy the Nigerian elite because of the problem that has been created a long time ago.

“Until certain things are done, we may not be able to move forward.”

Oba Abolarin, in spite of that, disclosed that all hope was not lost in the Nigerian enterprise and that one of the ways of defeating insecurity is to take care of the downtrodden.

In his welcome address, the Osun NUJ Chairman, Wasiu Ajadosu explained that the discussions would serve as a platform to discuss security issues as there was a need to move away from partisan politics and iron the issues out squarely.

He noted that in the six geo-political zones of the country there is one prevailing security challenge or the other adding that Nigerian People should be more concerned about the issue of kidnapping, terrorism and banditry.

Ajadosu challenged the invited guests to deliberate on proffering solutions.

In his words, “With the crop of experts we invited, we should be able to proffer solutions to the problem of insecurity.

“The media should focus more on reporting developmental issues and not security which is the primary responsibility of government.

“There is a need to seat and dialogue to find solutions to the national issues.”

Ajadosu also suggested the need to check the workings of the 1999 Nigerian Constitution and supported the clamour for community policing.