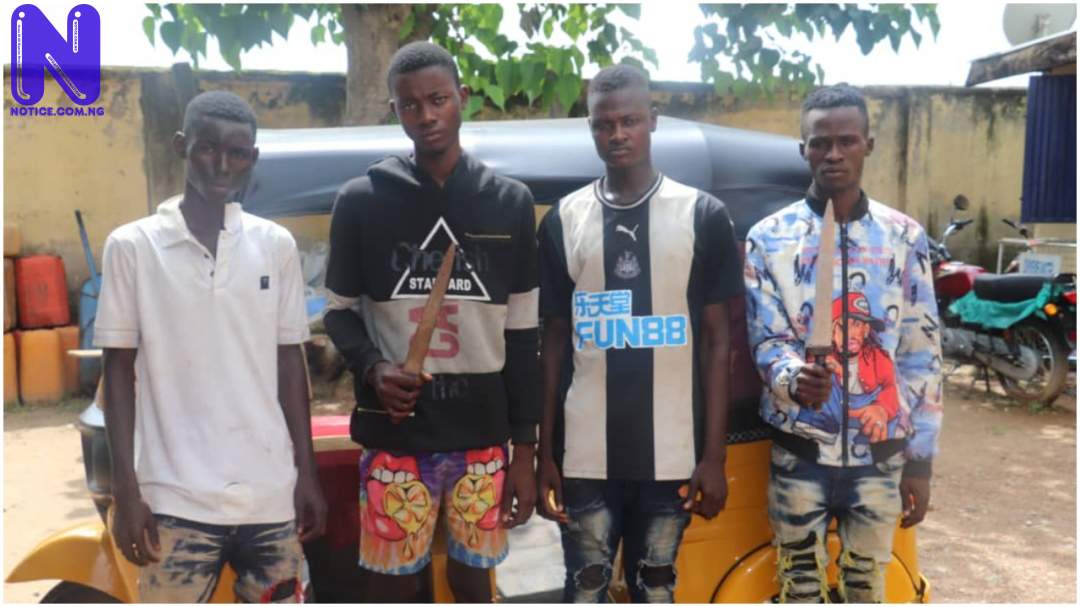 Parading the suspects, the state police through the Public Relations Officer, PRO, DSP Wasiu Abiodun said the suspects were arrested based on credible information received.

He stated that the four persons were arrested, while on patrol at the Farm-centre area of Chanchaga LGA after robbing a female victim with two knives in a tricycle of her Infinix hot 5 handsets valued about N45,000.00 and cash of about N55,000.00.

“The said victim immediately raised an alarm which alerted the police patrol team, while the hoodlums quickly zoomed off in their tricycle after robbing her, but after a hot chase by the patrol team, the suspects were apprehended,” he said.

Also, the state Police image maker disclosed that Abdul Yahaya age 29yrs, Mustapha Abubakar age 28yrs, both of Sabo Angwan-Kwamba, Suleja were arrested for attempting to steal a handset from their victim.

The two suspects were arrested at an estate in Kwamba, Suleja where they attempted to snatch a handset from a victim and an alarm was raised which attracted mob action.

“The Police patrol team quickly mobilized to the scene, rescued and arrested him from the mob who had inflicted injury on the suspect”

” The suspects were equally reported to have robbed some victims at Gabodna market and made away with three mobile phones, one Atm card, and a sum amount of money,” the PRO further stated

Items recovered from them include one locally fabricated pistol with an empty cartridge one local fabricated gun, one Dane gun, four knives, three cutlasses, one scissors, one camera, one security light, two Atm cards, one hammer, one stick, one motorcycle key, two black trousers and a black t-shirt one black face cap, and four wraps of dried leaves suspected to be Indian hemp.

He added that during an investigation, the six suspects all confessed to the crime and would be arraigned in court as soon as findings are concluded.