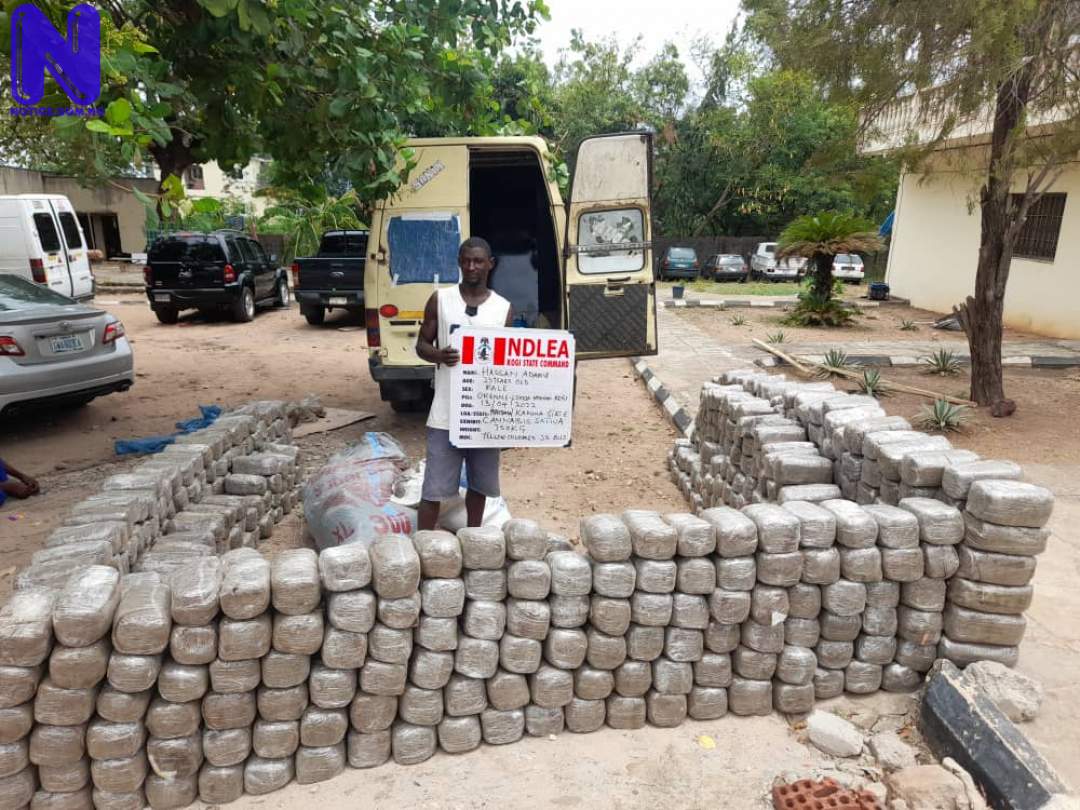 The Kogi State Command of the National Drug Law Enforcement Agency (NDLEA) has arrested 149 suspects with a total of 2,699kg of assorted hard drugs between January and June this year.

The Kogi State Commander of the NDLEA, Mr Abdulkadir Abdullahi Fakai, made the disclosure during a press briefing on Tuesday in Lokoja to mark the beginning of week-long activities in celebration of the 2022 United Nations Day Against Drug Abuse and Trafficking.

The Commander said that 149 drug suspects made up of both males and females were arrested with the 2,699kg assorted drugs within the period under review including codeine, Methamphetamine, Exol-5, Diazepam, tramadol, Cannabis sativa, and Pentazocine amongst others.

The NDLEA boss said that the Agency recorded the highest seizure of 948.956kg in April followed by 307.815kg in May while the least of 59.973 kg was recorded in June

He said that already the command has tried and convicted 29 accused persons while other cases are still pending at the Federal High Court, Lokoja.

“The drug situation in Nigeria and indeed Kogi is disturbing, especially being a microcosm of Nigeria, and as a federating unit, Kogi cannot stand alone in the face of this ominous threat of drug abuse and trafficking.

“The implication on security, economic and the general wellbeing is dire. Statistics and empirical facts from National Drug Law Enforcement Agency operations indicate clearly that the drug problem is mutating into a colossal social problem.

“It has become an issue linked beyond doubt to escalation of insecurity and its attendant effects on peace and economy across the country, ” he said

He said that the debilitating effects of armed robbery, kidnapping, banditry, rape, and other violent crimes against humanity were contesting for the soul of our nation.

According to him, “We know that drugs are mostly the catalyst for these vices, because anywhere that there is drug, there is crime and vice versa.”

He said that explains why the command has engaged in various operations, sensitization, and courtesy visits to Governor Yahaya Bello, Secretary to State Government, traditional rulers, and the state security chiefs including the Police and the Nigerian Army.

He disclosed, “In the area of drug abuse and preventive education (DAPE), 25 schools and organizations were sensitized from January to date while 84 clients referred from investigation units were counselled within the period.

“Drug war is a onerous task that can not be left in the hands of the agency alone.”

He enumerated some successes recorded within the period to include the arrest/seizure of a J5 bus, intercepted along the Okene/Lokoja-Abuja expressway conveying 750kg of dried weeds (Indian Hemp), interception of 29 pieces of sewn military camouflage uniforms in a truck and arrest of a jailbreaker.

Fakai, in spite of that, called on the general public for cooperation, support, and provision of useful information to the agency whenever they see or hear something strange.

He said that all hands must be on deck as the Agency cannot do it alone, but the government at all levels, traditional institutions, religious and opinion leaders, NGOs must give a helping hand to ensure a drug-free Kogi and Nigeria as a whole.