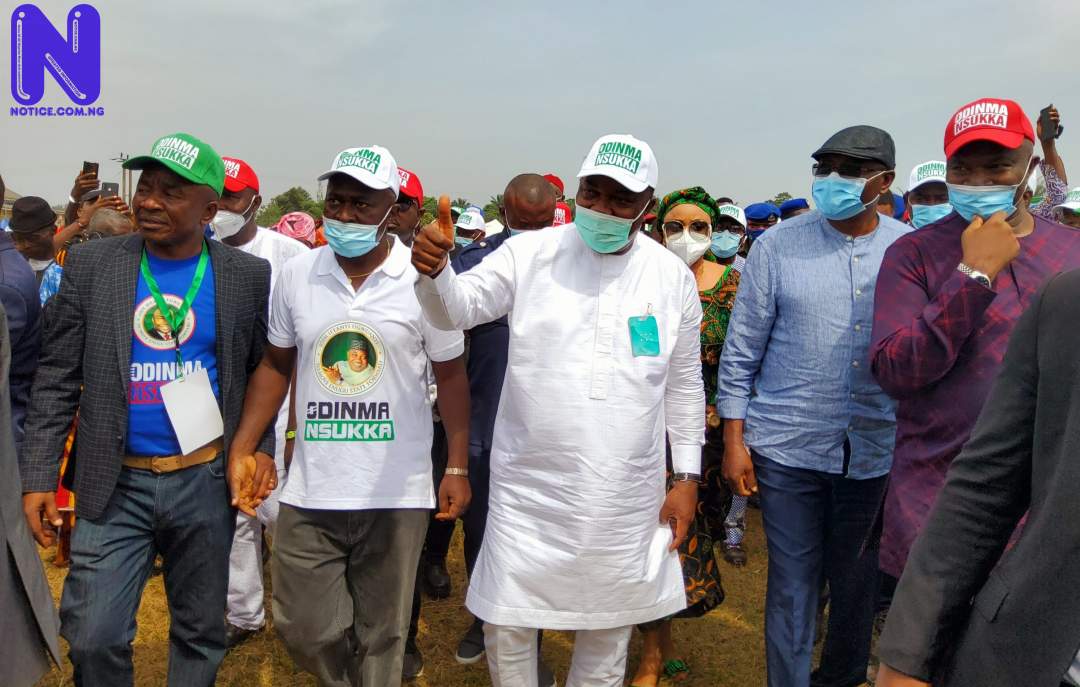 The people of Enugu North (Nsukka) Senatorial District of Enugu State, from all walks of life, converged on Nsukka High School, for a Unity Rally in honour of Governor Ifeanyi Ugwuanyi and unanimously declared their support for the governor, reassuring him they are solidly behind him.
The people of Nsukka also applauded Gov. Ugwuanyi for his administration’s sustained efforts in developing the zone, which they said had been marginalized. They also praised the governor for entrenching peace and good governance in the entire state.
Speaking at the well attended rally, some of the leaders of Enugu North Senatorial District told Gov. Ugwuanyi that the entire people of Nsukka zone are united and proud of his remarkable achievements in the area and the state in spite of the nation’s economic, security and public health challenges, reiterating their unalloyed support for him.
The leaders who spoke at the event include the Senator representing Enugu North Senatorial District, Senator Chukwuka Utazi; the Ex-governorship candidate of the All Progressives Congress (APC), Senator Ayogu Eze; Ex-governor of old Enugu State, Dr. Okwesilieze Nwodo; the member representing Nsukka/Igbo-Eze South Federal Constituency, Rt. Hon. Pat Asadu; the President General of Ohanaeze Ndigbo, Chief Nnia Nwodo; the Bishops of Nsukka Catholic and Anglican Dioceses, Professor Godfrey Igwebuike Onah and Most Rev. Aloysius Agbo respectively; the Nsukka Professors, 145 traditional rulers in the zone who came with their cabinet members, and the Chairman of Odinma Nsukka that organized the event, Chief Vita Abba, among others.
Speaking, Senator Ayogu Eze told Gov. Ugwuanyi that “this gathering is to reassure you that your people are solidly behind you” charging him to “march on” and “move on”.
Senator Eze who stated that he was very happy to be alive to witness the event where every Nsukka man gathered in unity to show support and solidarity to one of their own, in the person of Gov. Ugwuanyi, also charged the governor to continue with his laudable vision for the zone and the state.
Also speaking, the Chairman of Odinma Nsukka, Engr. Abba, pointed out that the group felt that it was imperative that Nsukka people should unite and come together to support their own, encourage and offer prayers for his continued success till the end of his tenure, declaring that “our support for Governor Ifeanyi Ugwuanyi is irrevocable”.
On his part, the Ohanaeze Ndigbo President General, Chief Nwodo, spoke in the same direction, reemphasizing the need for the people of Nsukka zone to unite and rally round the governor, saying: “We were marginalized in the past but Gov. Ugwuanyi has wiped away our tears”.
The Ex-governor of old Enugu State, Dr. Nwodo said that it was a thing of joy that he was alive to see an Nsukka governor after him, and urged the people of Nsukka zone to also unite and take advantage of the numerical strength to give Gov. Ugwuanyi the maximum support he deserves.
Reaffirming their firm support for Gov. Ugwuanyi, the 145 traditional rulers in Enugu North Senatorial District told the governor, who they described as a “worthy son”, that “we are solidly behind you” and pledged the consistent support and prayers, saying: “Wherever you are going, we will go with you”.
Speaking on behalf of the Nsukka Professors, Professor Fabian Onah thanked Gov. Ugwuanyi for his massive infrastructural development in Enugu State, maintaining that “we are solidly behind you and we will continue to pray for you to realize more successes in this last lap of your tenure”.
Other speakers, such as Senator Utazi, Rt. Hon. Asadu, Bishop Onah and Bishop Agbo, also extolled the governor’s leadership qualities and assured him of the unalloyed support and solidarity of the people of the zone.