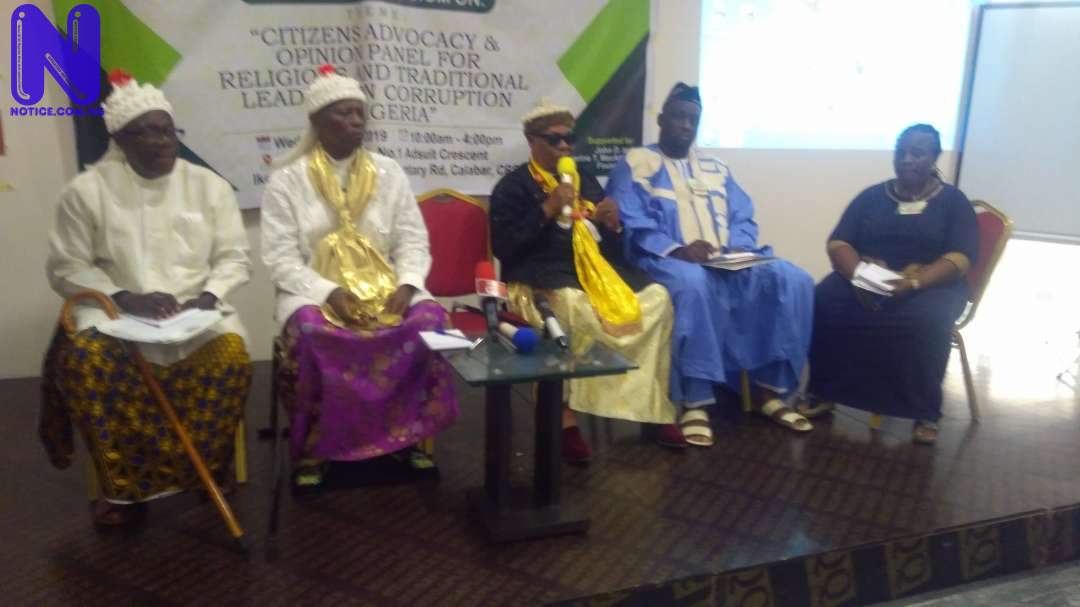 The Paramount Ruler of Odukpani Local Government Area of Cross River State, His Royal Majesty (HRM) Etinyin Otu Asuquo Mesembe VI, has said that the government was part of the problem corruption in the country.

He alleged that traditional institution was not well taken care of, “The government at all levels fight corruption in a selective manner and this makes the fight a lip service”.

Speaking at a symposium, combating corruption through interfaith organized by Mac Arthur Foundation on Wednesday, the monarch said “If we want to fight this hydra headed problem, we must do it from the roots.

“As a leader, whether traditional, religious or political you must understand that once you become corrupt, no matter the level, the people will not have regard for you any longer, it doesn’t really matter how long it takes, you will be exposed.

“We have been coerced to join the bandwagon because the government seems to have neglected the traditional institution. Our constitution was borrowed and developed with a mind set of corruption and carefully excluding the traditional system because of greed and other selfish interests”

“We must include religious studies in our school from the cradle, it is important, it is essential, it builds morality in our society and it must be brought back to in still morals in our children” he stated.

In his lecture, Prof Uno Ijim Agbor, a lecturer in the Department of Public Administration, University of Calabar, said that the African culture mounts so much pressure on the leaders from the continent to steal and become corrupt as they enter public offices because they want to please their people.

Prof Agbor said Africans demand so much from their leaders once they are in position because they want them to satisfy all their selfish needs at once even if it means dipping their hands into public funds.

“Our culture as Africans mounts so much pressure on our leaders to become thief and steal as well as become corrupt once they take up leadership positions because we want them to satisfy all our needs at once.

“There are a lot of demands on public office holders by the traditional and religious leaders to meet up with so many demands, and when they look back or be perceived in negative light they steal.

“They have no choice than to deep their hands into public funds to satisfy the needs of the people at home. The people must understand that public funds do not belong to the man in office or them; neither is it private funds,” he stated.