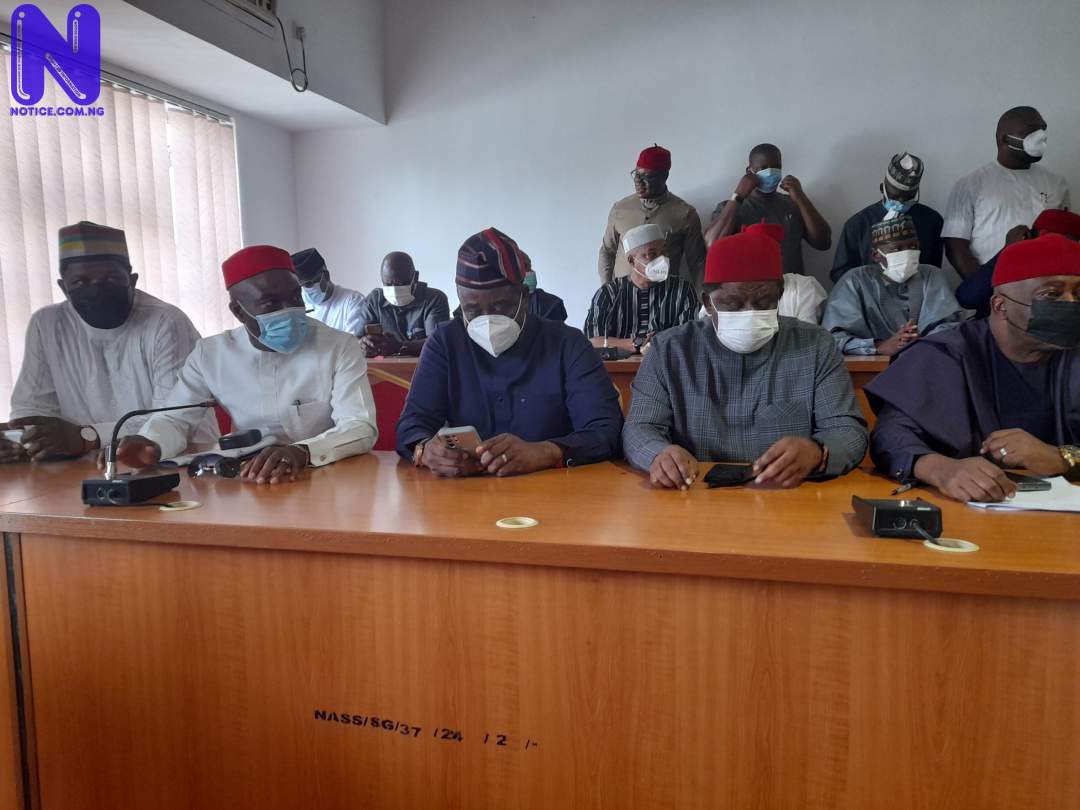 The National Assembly minority caucus of the upper and lower legislative chambers on Tuesday slammed President Muhammadu Buhari, describing his administration as so inept to the extent that he has become so bereft of ideas to tackle insecurity.

The caucus, which comprised lawmakers of the Peoples Democratic Party under the Chairmanship of the Senate Minority leader, Senator Enyinnaya Abaribe, raised the alarm that insecurity which was at the zonal level has engulfed the entire nation in the last six years of APC led administration.

Speaking at a press briefing after the caucus meeting, they listed Buhari’s infractions on the Constitution of Nigeria, stressing that they caucus would take steps at the opportune time, if insecurity persists.

The step which was apparently an ‘impeachment of Buhari’, they maintained, was to save the country from total collapse.

“This is a joint meeting of the caucus minority party of the 9th National Assembly both at the Senate and House of Representatives.

“We have looked at the issue befalling Nigeria at this moment with respect to security of Nigeria. We have looked at Constitutional reform and we have also made what we call suggestions on the way forward.

“As a minority caucus of the National Assembly, we have expressed serious concern about the ineptitude and inability of the APC-led government to arrest the drift to anarchy of our nation.

“This APC led government during inception and during campaign in 2015 elections made promises to the Nigerian people that they were going to deal with security and that there will be no security challenges, but sadly and most unfortunately, from 2015 till date, not only the security, but the APC administration has rather broaden the insecurity situation from not only the Northeast, it has spread to Northwest, North Central, Southeast, South-south and Southwest.

“Virtually every part of Nigeria is bedevilled with one security challenge or the other.

“We, therefore, as a caucus suggest that immediate steps should be taken by government at all levels to set up proper security infrastructure whether in the mould of State police and other Constitutional reforms of the nation.

The caucus further faulted FG’s economic policies which they argued has brought about an inflationary trend that has left the nation in tatters.

“The caucus also expresses very strong concern about the economic strategy of the government which has culminated into what is called quantitative, or what an ordinary man knows as printing money and which has led us to high inflation, devaluation of our naira to a height that we never expected.

“It has also brought concomitant unemployment and has led the government to contemplate raising the price of fuel, electricity tariff and all manner of charges on the hapless Nigerian public.

“We think the government should reverse itself and shouldn’t continue this mindless borrowing without seeing benefits coming from it.

“Thirdly, the caucus has taken note that the President is absent from duty. We have not seen our president; we have not heard from our president despite killings that are going on and that have turned Nigeria into a killing field.

“Therefore, the caucus has taken note and will continue to take note of Constitutional breaches that are happening at this time by the government of APC and we will at the appropriate time utilise all Constitutional methods and measures after consultation with our colleagues to do the needful to save the country from collapse.

“We as caucus want to put on notice for all Nigerian People and the International community threats on the lives of our members; to those who say the truth about the state of Nigeria today and these threats have come in various forms, including threat to lives.”