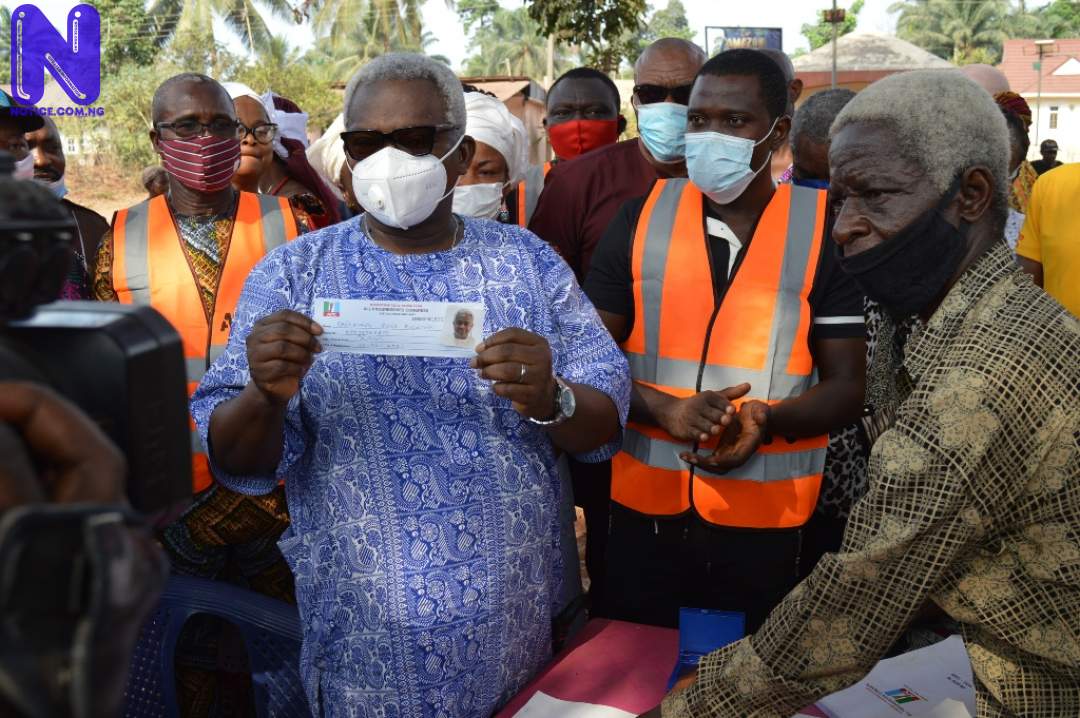 The Director-General of the Voice of Nigeria, VON, Mr. Osita Okechukwu has declared that the ongoing membership revalidation and registration exercise of the All Progressives Congress, APC, met the constitutional provisions of the party and will most importantly make the people the genuine owners of the party, not Godfathers.
Okechukwu spoke in his Eke ward in Udi Local Government Area of Enugu State, weekend, where he revalidated his membership of the party.
He said he was surprised that the party’s pioneer national chairman, Pa Bisi Akande, its national leader, Asiwaju Bola Ahmed Tinubu and the immediate past chairman, Comrade Adams Oshiomhole were opposed to the noble exercise. “ Let Comrade Oshiomhole tell you that APC revalidation and registration exercise is unconstitutional or Pa Akande that it is waste of resources, tell them it is fake news, for the registration exercise is to make the people the genuine owners of our great party and not godfathers. APC constitution mandates us under section 9(4) to update our membership every six months.”
The VON DG, who is a foundation member of the ruling party, said the revalidation and revalidation exercise was an opportunity for Ndigbo “to reconnect the pragmatic Zikist Alliance which had been very beneficial to Eastern region.”
He noted that his call aligned with the ancient Igbo maxim that, “you don’t stay in one stand in the market place. For the South East, after 21 years in the PDP, is it not high time we moved into the mainstream?”
“APC offers us in addition to 2nd Niger Bridge, Port Harcourt – Maiduguri Standard gauge rail line and Ranches to curb herdsmen soonest.”
Buttressing his support for the membership revalidation exercise, Okechukwu said “My little understanding of political party’s administration for over forty years in liberal democracy posits that revalidation of membership and continuous registration of members are both valid exercise.
“It is neither unconstitutional nor undemocratic, for Section 9(4) of the APC’s Constitution expressly states that, ‘A Register shall be compiled and maintained at the Ward level …provided that the Party shall update its members’ records every six months and remit updated copies to the appropriate Secretariat.’
“Accordingly, methinks that His Excellency, M.M. Buni-led Caretaker/Extraordinary and Convention Planning Committee (CECPC) of the All Progressives Congress (APC), has valid reasons to embark on revalidation and registration of members of our great party.
“In fact, the CECPC is upholding our great party’s constitution; therefore one is at a loss how in unison our revered first chairman, Pa Bisi Akande, our national leader Asiwaju Bola Ahmed Tinubu and our last Ex-chairman, Comrade Adams Oshiomhole are opposed to this noble exercise.
“One will be happy to know their main reasons, in fullness of time, albeit the exercise is not unconstitutional. Otherwise, I am stunned that Asiwaju, one of the main pillars of the merger of APC in 2013, who took it upon himself to finance a National Data Membership Register at Lagos, will frown at this noble exercise.”
He recalled “how the Asiwaju project was demolished by the then desperate Peoples Democratic Party (PDP)’s led federal government. PDP then did all manner of shenanigans to stop the registration of APC. When the ignoble attempts failed and they learnt that Asiwaju constructed a data base and was mobilizing membership nationwide, they quickly simulated the Department of State Security Service to demolish the center. They covertly cried wolf, where none exists. This damage is what Governor Buni and Co is trying to redress.
“With the unprecedented move in and move out, jumbo-jumbo and topsy-turvy, which became the metaphor of party politics Nigeriana, is it not pragmatic to know the exact membership database of our great party? For the avoidance of doubt is revalidation and registration not more beneficial to Comrade Oshiomhole, given the scatter-scatter in Edo State politics in the last one year.
“I am one of those who is interested in accurate membership data for effective electoral planning. In some wards, you have more than 1,000 registered members and when election comes and after voting, our party scored less than 300 votes, is it not good to close this kind of gap? It is my candid view that this is one of the valid reasons for revalidation and registration.”
He called on the people of Enugu State and Ndigbo in general to come out en-masse “and embrace the pragmatic Zikist Alliance by identifying with the only party that has remembered them in terms of infrastructure. President Muhammadu Buhari’s government has no doubt left indelible marks in the South-East by doing what the PDP never attempted to do for 16 years running.”