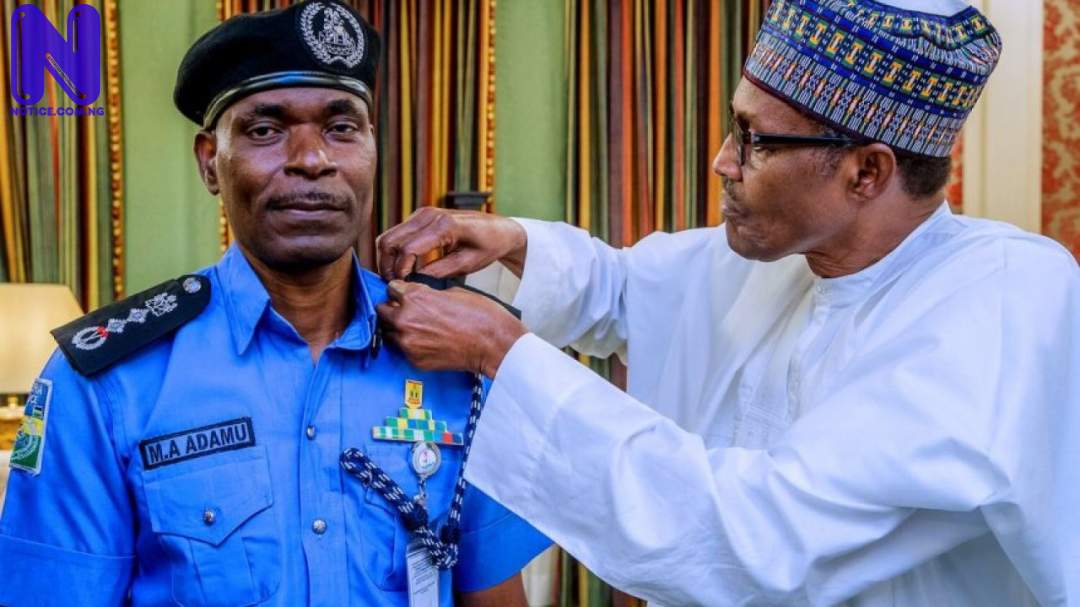 In the evening of Monday, 1st February, 2021, there were reports to the effect that President Muhammadu Buhari had appointed a new Inspector General of Police, to replace Mohammed Adamu, whose tenure expired that day after spending 35 years constitutionally guaranteed.
An Assistant Inspector General of Police, who is the Commandant of the Police Academy, Kano, Zanna M. Ibrahim was bandied by some online media platforms as the new IGP.
However, on Tuesday, another report surfaced that the President had ordered Adamu, who reports said was already putting finishing touches to his handover notes by Monday evening, to hand over to the most senior Deputy Inspector General in the force.
Though many had expected that the two reports might have been ideal, since Adamu, by virtue of his serving out his constitutionally guaranteed 35 years, should bow out of the force honourably, but like in most situations, Nigerian People had something coming their way.
In an official confirmation of the President’s position on the tenure of the IGP, the Minister of Police Affairs, Mohammed Maigari Dingyadi announced to State House Correspondents on Thursday that Buhari has extended the tenure of Adamu by three months.
According to the minister, the extension was granted so as to be able to find a suitable candidate for his replacement.
Press analysis had earlier probed into why it’s difficult for President Muhammadu Buhari to appoint aides and other political office holders.
In the announcement on the extension, the minister said: “Mr President has decided that the present IGP, Mohammed Adamu, will continue to serve as the IG for the next three months to allow for a robust and efficient process of appointing a new IGP.
“This is not unconnected to the desire of Mr President to, not only have a smooth handover, but to also ensure that the right officer is appointed into that position.”
As noble as the reason for this extension may be, there are several Nigerian People who are of the opinion that it does not hold waters in any way.
According to a political commentator, Saburi Mohammed, the extension is an admission of failure of governance on the part of the Buhari administration.
“If truth must be told, granting Mohammed Adamu three months extension just because the President wants to look for a suitable replacement is admitting that this administration has failed in its duty to ensure seamless process of governance. Is the President and his handlers saying they never knew IGP Adamu was due for retirement on the first day of February, 2021, three months before then? Is the Presidency and the Ministry of Police Affairs not in possession of the CVs and enough dossier on all those who may be qualified for appointment into the office of IGP?
“If the answer to these questions is in the negative, then there is a major problem in the governance of this country. If it is not so, then the President may have just pulled a wool over our eyes with the reason giving for the extension”, Mohammed said.
A Constitutional Issue

Beyond the reason given by the Police Affairs Minister for the extension is the breaching of the the 1999 Constitution of the Federal Republic of Nigeria (As Ammended) and the Police Act 2020.
Reacting to the extension, two Senior Advocates of Nigeria, Ebun Adegboruwa and Mike Ozekhome, said the extension is both unconstitutional and illegal!
According to Ebun Adegboruwa, the appointment or extension of the tenure of an IGP must have the input of the Nigeria Police Council, which, As stated by him, never met to discuss or sanction the extension.
Mr. Adegboruwa also made reference, in a statement on Thursday, to sections 215(a) and 216(2) of the constitution while insisting that the President erred in extending Adamu’s tenure.
According to him, Adamu, by virtue of having served his constitutionally guaranteed 35 years, seized to be a member of the Nigeria Police Force and cannot be appointed as IGP from outside the force.
“The purported extension of the expired tenure of Mr. Adamu as Inspector-General of Police is illegal and unconstitutional.
“From all the above, when the tenure of a serving IGP expires on the ground of completing the mandatory 35 years of service, he cannot be asked to continue in office beyond his mandatory tenure.
“An IGP who has served the mandatory years of service ceases to be a member of the Nigeria Police Force from the date of his completion of his service. In this case, Mr Adamu ceases to be a member of the NPF from February 2, 2021.”
For Mike Ozekhome, a constitutional lawyer and Senior Advocate, Adamu’s tenure extension is arbitrary, illegal and unconstitutional.
Ozekhome, while featuring on Channels Television’s Politics Today on Thursday, said: “The president was wrong to have purportedly extended the tenure of Mr Adamu. Did he not see what just happened in America that we modelled our democracy after? Before Biden was sworn in on the 20th of January, he had already assembled his entire cabinet.
“A fire-brigade approach and doing the things that are unconstitutional, illegal, unlawful, unconscionable, arbitrary, whimsical and capricious are the present acts of Mr President.”
Rewarding Failure

Aside the constitutionality of the extension granted Adamu by Buhari is the feeling by many Nigerian People that he just, again rewarded failure and incompetence.
For many, extending the tenure of an IGP, under whom the nation continues to witness monumental rise in insecurity, police brutality and rising corruption in the force, is tantamount to taking Nigerian People for a ride.
Some ordinary Nigerian People on the street and analysts whose opinions were sampled by Press also said the #ENDSARS protests of October 2020 were enough to have made the President relieve Adamu of his position and not giving him a tenure extension.
It would be recalled that massive protests rocked the country in the month of October, 2020, as youths, fed up with the increasing police brutality, especially from the Special Anti-Robbery Squad (SARS), which many believed had gone rogue under Adamu’s leadership stormed the streets in protest.
Media reports have replete with heart wrenching accounts by victims of police brutality as they approach panels of enquiry set up by state governments, seeking for justice.
Though the police high command promised to restructure the force, starting with the disbandment of SARS, Nigerian People still believe largely that nothing really has changed since the #ENDSARS protests, except that SARS operatives are not roaming about the cities brutalising them.
Adenrele Edun, a young Nigerian who participated in the #ENDSARS protests in Lagos, believes Buhari has just betrayed Nigerian youths with the tenure extension for IGP Adamu.
According to him, the atrocities of the police and particularly operatives of SARS, happened under the watchful eyes of Buhari and as such, it was betraying for such a man to be given another three months in office.
“What is the President trying to tell the youths of Nigeria? That the protests and all we endured during that period, including the shootings at Lekki Toll Plaza was all in vain? How can Adamu get a tenure extension, when he should have been sacked immediately the protests broke out. Sincerely, what the president has done is an insult to the sensibilities of Nigerian youths and the memory of compatriots who have lost their lives as a result of police brutality and the ineptitude of the leadership of the force”, Edun said.
For Tunde Sanyaolu, a security expert, the level of insecurity in the country and the inability of the police to offer any reasonable solution is enough reason for IGP Adamu not to get an extension, even if he has not used up his mandatory 35 years in service.
For him, the problem is not so much about constitutionality but more about performance.
“The question is, is Buhari, in all honesty satisfied with the performance of his IGP? Has security of lives and property improved in any way under Adamu? Can the President honestly look Nigerian People in the face and justify what he has just done with the tenure extension?
“I am of the opinion that public office is essentially about public good and Adamu cannot, even in his own conscience say he has been able to work for the good of the Nigerian public”, Sanyaolu said.
For now, whatever the justification is, there seems to be a general consensus that the President has, again, fallen short of the expectation of Nigerian People and that, Adamu, in good conscience and good display of morality, should have been allowed to go home to rest after 35 years of ‘meritorious’ service to the nation.