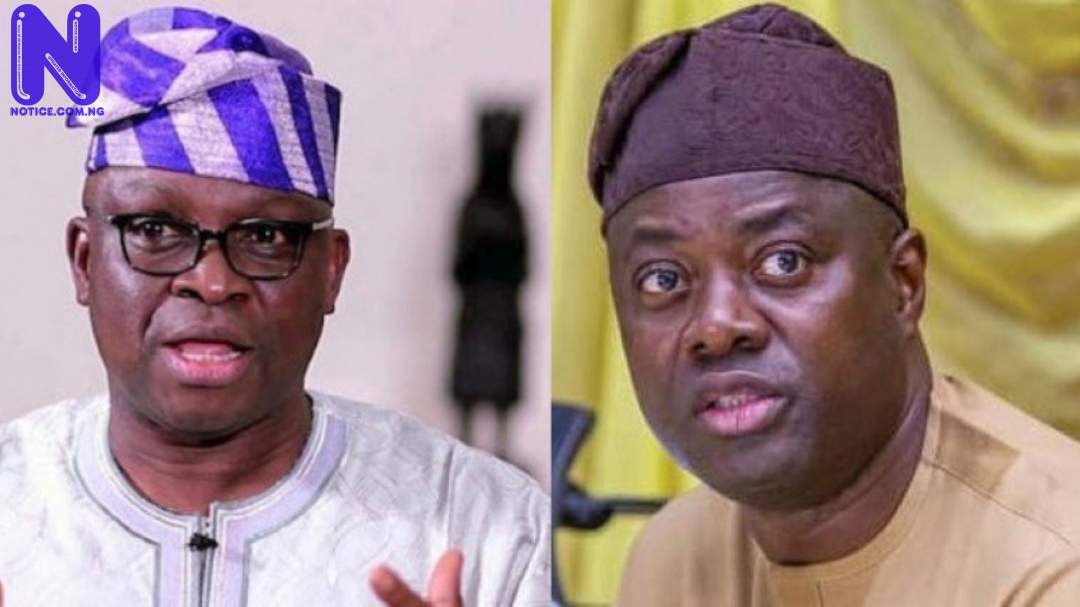 The Senator representing Ondo South Senatorial District in the Upper Chamber of the National Assembly, Senator Nicholas Tofowomo, has attributed the rift between Governor Seyi Makinde of Oyo State and Ex-Ekiti State Governor, Ayodele Fayose as mere individual interest that will soon be over.
Tofowomo on Thursday emphasized that what is currently being perceived as a political feud between the two leaders of the Peoples Democratic Party (PDP), was just a clash of interests ahead of the convention of the party in February.
Tofowomo further stated that by virtue of being a sitting governor, Makinde is the leader of the party in the south west as he added that he cannot have it all when it comes to positions within the party.
“There is no political rivalry between the two. When Fayose was 60 years old, Makinke really celebrated him. All that is going on is just politics. After the coming convention in February, you’ll see that they will embrace each other.
“Makinde is the leader of the party in the south west because he is the sitting governor. Nobody is fighting on that.
“Makinde cannot have his way unilaterally. I’m a senator. We have five senators from the party. He should have called us to. We’re human beings. I’m even older than him, I’m 61. I’ve been to four universities in my lifetime. He’s not studying the way I studied.
“After the election, that type of thing will stop because there will be a sitting chairman in charge of the six states, so he’ll be able to manage it well. When Eddy Olafeso was the National Vice Chairman, there was no crisis in any of the states. It was very smooth.”
The senator added that gang up against Eddy Olafeso as National Vice Chairman (South West) of the party was caused by Eyitayo Jegede, the candidate of the party during the October 10, 2020 governorship election in Ondo State.
“The election we did in PDP had split the party. The party executives are for Jegede. And Jegede and Eddy Olafeso contested together. The grudge is still there. I’ve to hold on to my own side which is Ondo South. I’m supporting Eddy Olafeso because he is from Ondo South. If Olafeso is from the north, I’ll not support him. I’m the number one from Ondo South and I’m putting everything in it to ensure that Olafeso wins in February.”
Meanwhile, Tofowomo also revealed that Jegede lost the last governorship election in Ondo State over alleged failure to involve party members in his ambition, particularly party leaders.