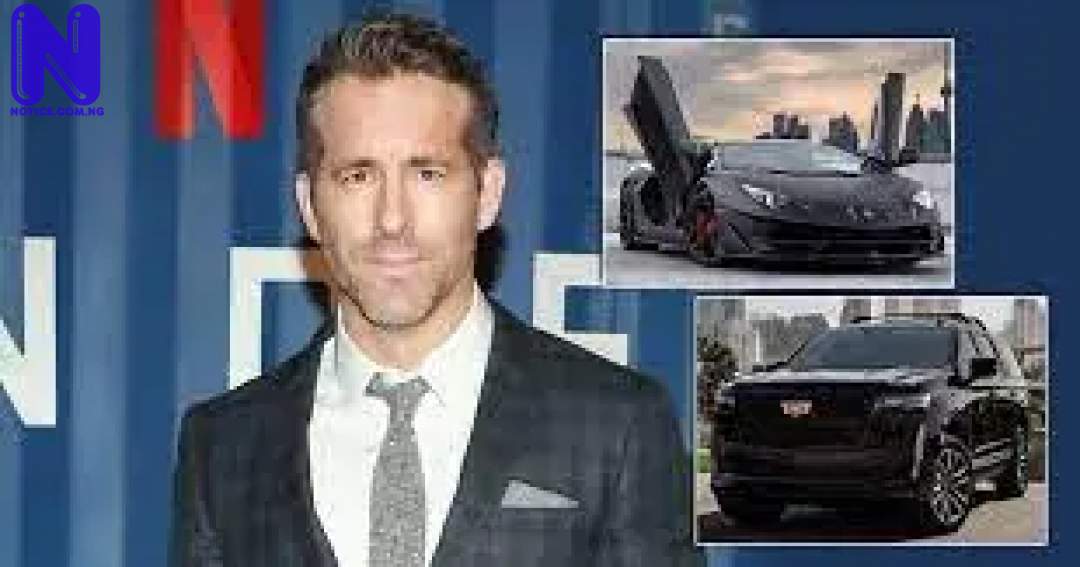 Ryan Reynolds Cars and Houses: Ryan Reynolds is a popular Canadian-American actor, and producer who became famous for his role in the Deadpool.

Born on October 23,1976,Ryan Rodney Reynolds' acting career began with him starring in a Canadian teen soap opera Hillside, from 1991-1993. Prior to taking up lead role in the sitcom Two Guys and a Girl Ryan Reynolds previously starred in minor roles.

His acting skills attracted several roles to him and he began starring in a range of movies including Th Proposal, National Lampoon's Van Wilder, Waiting and many others. Reynolds was also cast in Life, Buried, Woman in Gold, Green Lantern, Blade:Trinity, 6 Underground, Free Guy etc. He also lend his voice to several animations such as Turbo, Detective Pikachu, Turbo, The Croods and The Croods: A New Age.

Ryan Reynolds made his biggest hit in the superhero movie Deadpool 1 a d Deadpool 2 which he played the character of the movie title. The movie set several records especially Deadpool 2, even getting him nominated for the Golden Globe and Critics Movie Awards.

He was later honored with a star on the Hollywood Walk of Fame in 2017. Reynolds has been married twice, first to famous Hollywood actress, Scarlett Johansson from 2008-2011,and finally to Blake Lively in 2012. Their union is blessed with three daughters.

Outside acting, Ryan Reynolds also has stakes in several top companies like Aviation Gin, a company he both shares in back 2022. As stated by him, his desire was to go beyond that of ownership and that his plan was to oversee the Creative direction of the products and also take active role in the business.

He also acquired a stake in Mint Mobile as the owner of the company. He also serves as one of the board of directors of Match Group. Reynolds appeared in People's Sexiest Man Alive lists in 2007.

Ryan Reynolds net worth 2022 $100 million, you would expect him to splash some of his millions on some exotic cars right? Well the action-comedy actor has not disappointed in that area, as he has acquired some of the world's flashy cars. Here's a list of some of Ryan Reynolds's cars.

Lamborghini Aventador is a luxury supercar with revolutionized technology and is worth $420, 000. The dashing car makes no compromises when it comes to design. It advances every performance concept and immediately establishes itself as the yardstick for the super sports car industry.

The Tesla Model S is an all-electric five-door lift-back sedan produced by Elon Musk owned Tesla and launched globally on June 22, 2012. With the longest range and fastest acceleration of all electric vehicles in production, the Model S has a maximum speed of 150 mph and speeds from 0 to 100 in just 2.8 seconds. It runs on a twin engine that produces 825 hp and 1300 Nm of torque.

It is currently one of the best electric cars in the world.

Cadillac's largest SUV is driven either by a 6.2-liter V-8 engine that develops 420 horsepower and can shut off half of its cylinders while driving to conserve fuel, or a 3.0-liter turbo diesel Inline six-cylinder. With a top speed of 210 km / h, the vehicle sprints from 0 to 100 in just 5.9 seconds. Escalade costs a whopping 96,000 USD.

Considering all these cutting age technology used in designing the luxury car, Ryan Reynolds couldn't help but acquire one for himself.

It's sedan body along with well designed interiors to give the needed luxury, makes the Dodge Challenger worth acquiring.

The Dodge Challenger is among Ryan Reynolds Cars

The Toyota Prius is another one of the Ryan Reynolds Cars

I am sure you must have been curious to know where Ryan Reynolds and his family reside in. You will be shocked to know that the Hollywood star and Deadpool  character lives in a $5 million seven-bedroom, six-bathroom mansion in Pound Ridge.

The luxury mansion is situated on an 11.65 acres of land with an outdoor barn inclusive. Report also show that the couple and their children previously lived in a $2.3 million mansion in Bedford, NY back in 2012.

Indeed, Ryan Reynolds does not joke with luxury, as he makes sure he and his family enjoy all the luxuries life has to offer, from exotic cars to a jaw dropping mansion, you would be right to say that the Hollywood star is living the best life ever.

Thanks for reading about Ryan Reynolds Cars and Houses. Leave your reply in the comments below.