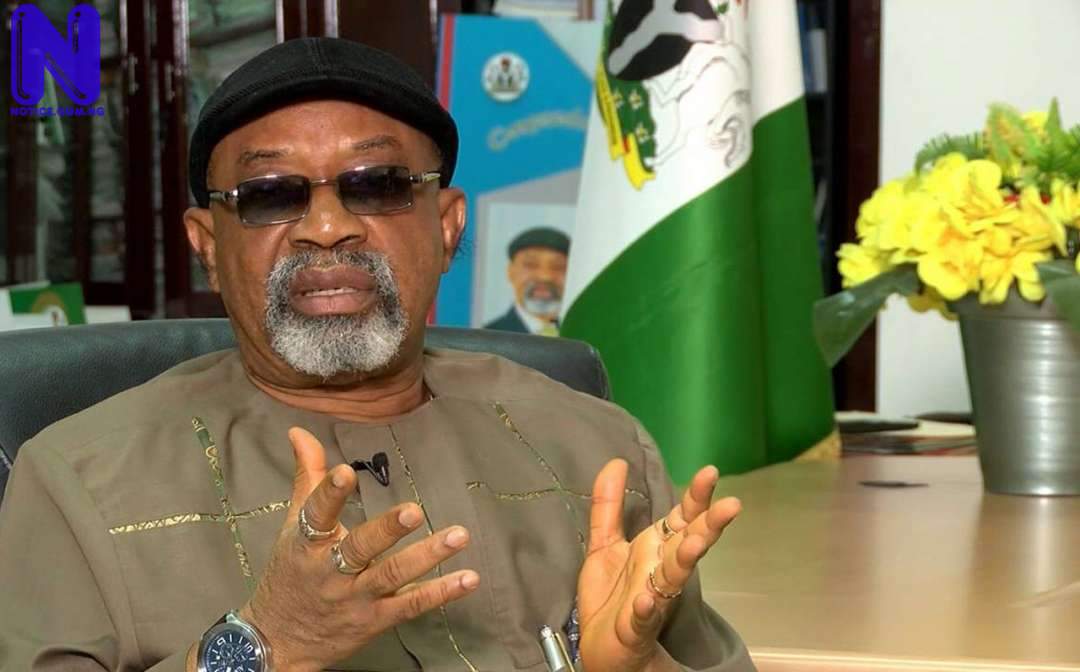 Nigeria’s minister of labour ?and productivity, Senator Chris Ngige was on Monday booed in Enugu as he made efforts to defend President Muhammadu Buhari’s appointments.

There have been knocks on Buhari over his appointments since he assumed office, as they are believed to be totally sectional.

The South-East region, which has no representation among the Service Chiefs, has continued to groan over the situation.

At the town hall meeting organized by the Federal Government on Monday at the Nike Lake Resort, Enugu, the lop-sided appointments took the centre stage.

Also in the front burner was issue of the Deputy Senate President, Chief Ike Ekweremadu, as the Ohanaeze Ndigbo vowed to resist any move by a certain cabal to remove him.

Both Governor Ifeanyi Ugwuanyi and other notable speakers, including Archbishop Emmanuel Chukwuma, urged the Buhari-led government to fulfill its promises to people of the zone.

The governor noted that the appeal had become imperative following the epileptic power supply and bad roads in the country.

He also tasked the Federal Government to make substantial investment in the Ugwuoba Gas Field in Oji River local government.

He said, “I recall the president’s campaign promise to revive the coal mines in Enugu and utilise it to generate electricity.

“Coal is a major energy source in some countries of the world and we have it in abundance in the state. If this is done it will directly or indirectly create job opportunities for millions of Nigerian People.”

Ugwuanyi brought before the Federal Government the Ada Rice Farm Irrigation Project which started in the state in 2007, but have been abandoned, adding that the project if completed would help in making the country self-sufficient in the production of rice.”

He added, “Of very critical importance to us is the Ada Rice Farm in Uzo Uwani local government. The project has the capacity for low gravity irrigation and has the potential of expansion to cover 10,000 hectares.

“Unfortunately, only 1,200 hectares of irrigable land have been fully developed. The Federal Government started the rehabilitation of the entire project in 2007. Sadly, progress in this regard has stalled.

“The government of the state will in this regard appreciate the intervention of the Federal Government to ensure the payment of huge debts owed the state by some federal agencies and establishments located in the state.

“These institutions have continued to owe these debts even though the state government provides infrastructure and other ancillary supports to them.”

Speaking at the event, Archbishop Chukwuma warned against the dire consequences of removing Ekweremadu.

He chided Imo State Governor, Rochas Okorocha and other APC members to desist from hatching any plot to oust Ekweremadu, maintaining that such would jeopardize Nigeria’s unity.

On his part, the President of the Ohanaeze Youth Council, Mazi Okechukwu Isiguzoro declared that “the plot by some forces within the APC to remove Ekweremadu is a very dangerous dimension.

“Ekweremadu is not a product of the South-East but the entire Senate of the Federal Republic of Nigeria.

“So, any attempt to remove him as the Deputy Senate President will be resisted by the Ohanaeze Youth Council. We will make this place very hot for any person, groups, or cabal that tried to remove Ekweremadu.

“We will match to the National Assembly straight away, occupy the place and resist any move by anybody within the government of Buhari to remove Ekweremadu. It won’t happen.”

On the demand for the release of Mazi Nnamdi Kanu, Isiguzoro maintained that “the Federal Government must immediately release Nnamdi Kanu; that is the only thing that will assuage the feelings of people of the South-East.”

Meanwhile, while Ngige struggled to convince the gathering, they repeatedly shouted “No oooo”, in total disagreement to his line of argument.?

Ngige had tried to defend Buhari by stating that anyone in position of authority would work with people he could trust.

He cited Enugu State as an example, noting erroneously that the Chief of Staff to Governor Ifeanyi Ugwuanyi must be from Nsukka, the Governor’s zone.

However, the people of South-East at the meeting faulted him immediately, maintaining that Governor Ugwuanyi’s Chief of Staff was from Abia State and not Nsukka.