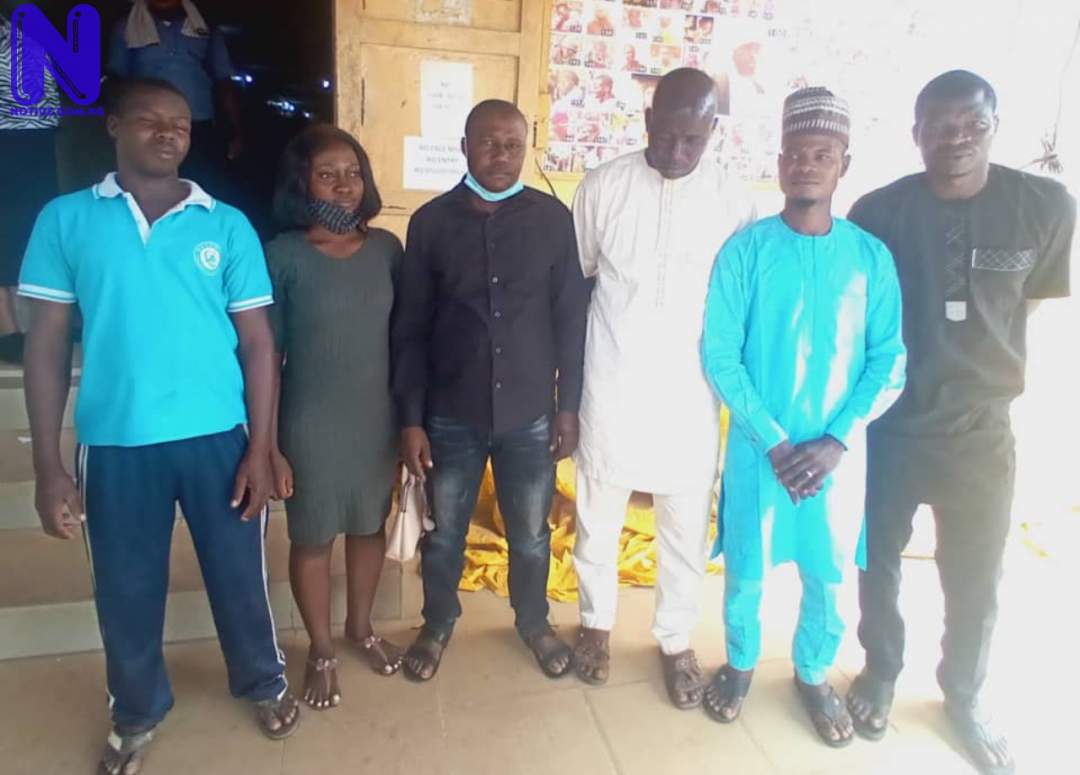 Kwara State Police Command on Wednesday in Ilorin, arrested six suspects for alleged disturbance of public peace and violation of COVID-19 safety protocols as directed by the state and Federal governments.
The suspects are, Aransiola Olubukun, (f) Salaudeen Abubakar, (m) Mohammed Saliu, (m) Ibrahim Alabi, (m) Isiaka Toyin, (m) and Adewale Abdulazeez, (m)
The offence, As stated by the spokesman of the state police command, Mr Okasanmi Ajayi, in a statement in Ilorin, was committed in the process of an alleged protest by a group called the ‘Sunset teachers’ in Ilorin metropolis.
Press reports that the protesters reportedly blocked the popular Ahmadu Bello Way in the state capital, while on the protest to Government House, blocking the road and denying other lawful road users their rights to movement.
The disturbance of public peace is in contravention of Section 113 of the Penal code.
The protest by the ‘Sunset teachers’ has been ongoing for almost a week without any interference from security agencies.
Okasanmi said, “The command wishes to state unequivocally that, it is the right of every citizen to protest peacefully, but it should be noted that, where one’s right ends, another one starts.
“Therefore, the command will not fold its arms while some people in the guise of exercising their supposed rights compromise the peace in the state,” he added.
Okasanmi said, “The police commissioner, Lawal Mohammed Bagega, has assured law-abiding citizens of their safety at all times, while would-be lawbreakers are warned to desist or face the full weight of the law.
Press recalls that the ‘Sunset teachers’ who were employed at the twilight of the previous Governor Abdulfatah Ahmed’s administration, were laid off in December 2020 and asked to reapply after the payment of December salaries by Governor Abdulrahman Abdulrazaq’s government following irregularities discovered in their employment.
Most of them were alleged to not have passed English and Mathematics, As stated by findings by Press.
Reacting, the state chairman, Nigerian Union of Teachers, Olu Adewara, said, the appointments of the 5,000 sunset teachers who were recruited by the previous Governor Abdulfatah Ahmed’s administration, were not confirmed before the current administration of Governor Abdulrazaq sacked them.
He said, ” Those who were not lucky to be invited for examination and interview for the new selection of teachers scheduled for next week, are those protesting and there is nothing the union can do, but we feel for them.”