Is anyone afraid of ICC - Ambassadorial nominations for ex-service chiefs 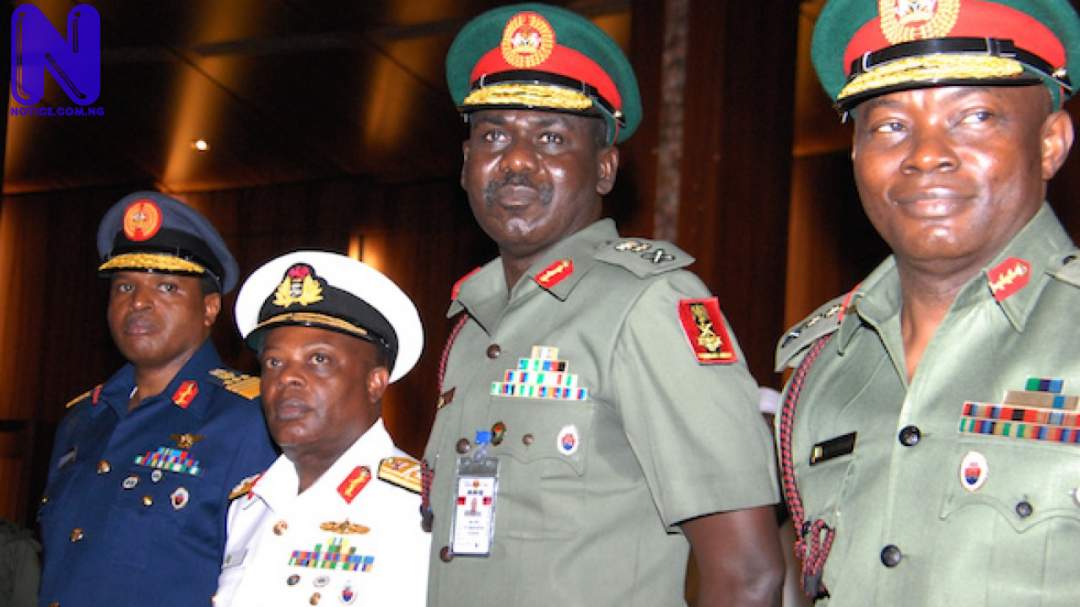 Nigerian People have very fertile imaginations and are very quick in reading meanings to every action of the government.
These traits again came to fore on Thursday immediately after the Special Adviser to the President on Media and Publicity, Femi Adesina, put out a statement, informing Nigerian People that President Muhammadu Buhari has forwarded a letter to the Senate President, Ahmed Lawan, nominating the immediate past service chiefs as ambassador-designates.
In the statement titled ‘Buhari nominates Olonisakin, Buratai, Ibas, Abubakar, Usman as Non-Career Ambassadors’, Adesina said: “President Muhammadu Buhari has forwarded the names of the immediate past Service Chiefs to the Senate as non-career Ambassadors-Designate.
“In a letter to Senator Ahmad Ibrahim Lawan, President of the Senate, the President said: “In accordance with section 171 (1), (2) (c) & sub-section (4) of 1999 Constitution of the Federal Republic of Nigeria as amended, I have the honour to forward for confirmation by the Senate, the under-listed five (5) names of nominees as Non-Career Ambassadors-Designate.”
“The nominees are: Gen Abayomi G. Olonisakin (Rtd ), Lt Gen Tukur Y. Buratai (Rtd), Vice Admiral Ibok-Ete Ibas (Rtd), Air Marshal Sadique Abubakar (Rtd), and Air Vice Marshal Mohammed S. Usman (Rtd).
“The President urged the Senate to give expeditious consideration to the nominations.”
The statement by Adesina, set the tone for another heated debate by Nigerian People online, especially Twitter and different WhatsApp groups, with many, either rightly or wrongly, accusing Buhari of trying to shield the retired military top shots from a possible investigation by the International Criminal Court (ICC) for crimes against humanity.
How it all Began

As early as 2015 and 2016, Nigerian People started accusing the Nigerian military of committing crimes against humanity and abusing the rights of people.
The killing of Shiites in Zaria, Kaduna State, the faceoff with members of the Indigenous People of Biafra (IPOB), leading, reportedly to the death of 150 of the pro-Biafra agitators, accusations of rights violations in the North-East in the war against insurgency, especially of women and children, amongst many others were cited.
A petition initiated against the immediate past Chief of Army Staff, Lt. General Tukur Buratai, accused him of gross human rights abuses.
The petition, initiated by Virgo Phillips, signed by 944 persons and addressed to the United Nations, reads:

“The use of the military to intimidate, harass and threaten protesting civilians is a violation of the united nations human rights charter. Peaceful protest is a democratic exercise that enables citizens to hold their leaders accountable and deliver democratic dividends to the citizenry. This will yield good governance, human capital and infrastructural development. The plan to deploy soldiers in our streets under the disguise of a military operation tagged “Crocodile Smile” is a ploy by Lt General Buratai to implement mindless and senseless killings of innocent and defenceless End SARS protesters in the same vain he brutally massacred the Shiite Muslims and IPOB youths. These young men and women are fighting for their future: they cannot and will not be intimidated. The threat of mass murder or genocide or its actualisation will not stop them: rather it will embolden them and turn them into martyrs for democracy. Lt General Buratai must be stopped by all Democratic means globally.”
The above, which is about the latest of the petitions, was initiated after the End SARS protests and it came after many other petitions had been filed against the ex-service chiefs.
Aside from the petitions by Nigerian People, a rights group, Amnesty International also variously accused the Nigerian military of rights abuses, extrajudicial killings, while also calling for the probe and prosecution of the leadership of the military by the International Criminal Court.
The call for the probe and prosecution of the leadership of the military for war crimes included the recently retired service chiefs, who the President just appointed as ambassadors-designate.
Shielding the Guilty?

The reaction of Nigerian People to the nomination of Olonisakin, Buratai, Ibas, Abubakar and Usman suggested that they believe the President is playing the ambassadorial card just to ensure diplomatic immunity for the chiefs.
Nigerian People also believe the ICC had received enough information to embark on an investigation of Buratai and other retired service chiefs for alleged war crimes in the fight against Boko Haram insurgents in Nigeria’s North-east.
The opposition party, Peoples Democratic Party (PDP) led the charge in accusing the Nigerian Government of trying to block a prosecution by ICC.
In a statement by the National Publicity Secretary of the PDP, Kola Ologbondiyan, the party said the nomination was a plot by the presidency to shield the immediate past service chiefs from investigations over the alleged killing of innocent Nigerian People and crimes against humanity under their watch.
The party also called on the Senate not to confirm the nomination.
“The PDP charges the Senate to eschew all partisan considerations and stand on the side of the people, particularly the victims of the atrocious regime of the ex-service chiefs by rejecting the demand by President Muhammadu Buhari to confirm them as ambassadors.”, the party said.
The party also said the nomination was a sacrilegious and horrible assault on the sensibility of Nigerian People.
Adding his voice to the debate, Afam Osigwe, a Senior Advocate of Nigeria, said he was disappointed with the nomination.
According to him, the Buhari government should have waited for the ICC to conclude its investigation before nominating them, adding that the manner of the nomination suggests that Buhari only wanted to confer diplomatic immunity on the Ex-Service chiefs.
“I would have thought the government should have been circumspect in nominating any person who has charges pending against him or her before the ICC for crimes against humanity.
“I thought it would have been better for any responsible government to have waited for the outcome of such investigation before appointing such persons.
Also, Inibehe Effiong, a lawyer, insisted that the appointment of the Ex-service chiefs was an immoral attempt to confer diplomatic immunity on them so that they can evade the prosecutorial jurisdiction of the ICC.
He said: “Buhari has by this ignoble appointments reminded Nigerian People that he is deaf to their cries and blind to their suffering. No leader in this country in my lifetime has exceeded Buhari’s parochialism and provocative indifference to public opinion.
“After removing them belatedly, this president has now rewarded them for superintending over the mass murder(s) of citizens by the Armed Forces and non-state actors such as Boko Haram and the so-called bandits. In other words, Buhari is telling them ‘thank you for keeping to my covenant with failure’”.
An Exercise in Futility

Though shielding the ex-service chiefs from prosecution may still be in the realm of conjecture, expert opinions, in spite of that, say Buratai and co may after-all not be able to escape from possible probe and prosecution.
According to a Ex-Director-General of the Nigerian Institute of International Affairs (NIIA), Professor Bola Akinterinwa, the nomination of the ex-service chiefs as non-career ambassadors may not necessarily grant them diplomatic immunity or protect them from being probed by the International Criminal Court.
According to Akinterinwa, the ex-service chiefs who were believed not to have performed at home would perform outside the country.
According to him, some powerful countries may declare them as persona non grata over alleged human rights violation.
He said: “First of all, we need to get the concept of diplomatic immunity right. Diplomatic immunity as derived from public international law is different from diplomatic immunity as derived from private international law. The one derived from public international law refers to the Vienna Convention of 1961 on Diplomatic Relations in addition to subsequent protocols in which case as an ambassador right from articles 27, 31 of the convention, they cannot be violated, they cannot be prosecuted.
“If for instance, the country they will be posted is any of these powerful countries, certainly, they will declare them persona non grata. So that what they are running away from is to take advantage of diplomatic immunity, they will deny them that in advance and give different excuses.”
Akinterinwa, in spite of that, noted that since the crimes they are being accused of were committed before they were appointed as ambassadors, they might still be liable to prosecution.
“The crimes they (Ex-service chiefs) committed were not committed when they were ambassadors and so when they come back, they will still be liable. They can’t run away from that. Nigeria is a signatory to the ICC status. So, Nigeria is required to facilitate the prosecution of anyone including its own citizen”, Akinterinwa said.
Notwithstanding the reasons for the nomination of the ex-service chiefs, the ball now falls squarely with the court of the Nigerian Senate to do the needful.