INEC speaks on conniving with APC to rig elections 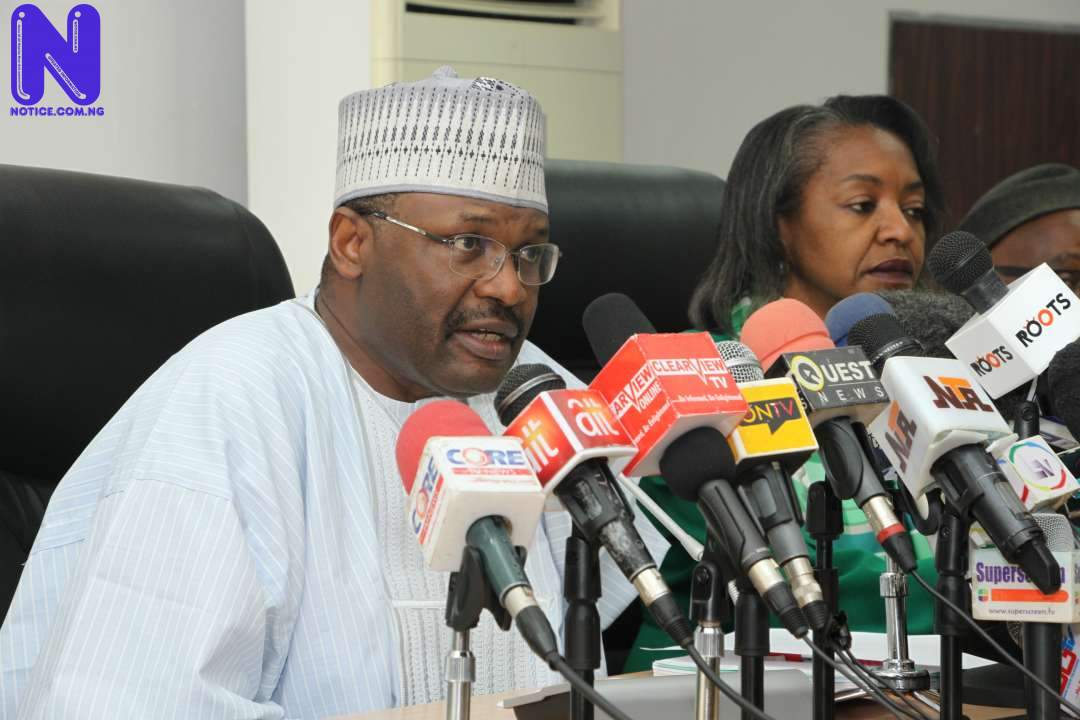 The Independent National Electoral Commission (INEC) has said that it does not connive with any political party to undermine elections in the country.

This was the position of Chairman of the INEC, Professor Mahmood Yakubu, during a meeting with Resident Electoral Commissioners (RECs) in Abuja on Tuesday.

He noted that elections in Nigeria were being threatened by impunity, which he said can only be curtailed by enforcement of sanctions.

The Peoples Democratic Party (PDP) had on Monday accused INEC of conniving with the ruling party, the All Progressives Congress (APC) to rig elections in some states, including Kogi Bayelsa, Kano, Ekiti and Osun states, threatening to boycott future elections if reforms are not introduced to the electoral system.

But Yakubu pointed out that the only way to safeguard the sanctity of the electoral process is to ensure there are enforceable sanctions for electoral offences and to see to it that offenders, no matter how highly placed, are adequately punished when caught infringing the law.

As stated by him, the Commission would continue to work with the National Assembly and other stakeholders to see to the recommendation of the Uwais Committee on Electoral Reforms (2008) on the establishment of the Electoral Offences Commission and Tribunal is realised soon enough.

“It is inconceivable that INEC will make elaborate arrangement for the deployment of personnel and materials and then turn around to undermine ourselves in the field on Election Day. Impunity has become the bane of our elections.

“The best antidote to impunity is the enforcement of sanctions under our laws without fear and favour. Where offenders are not punished, bad behaviour is encouraged.

“The Commission is deeply concerned that elections in Nigeria, especially for executive positions, are increasingly characterised by brazen acts of impunity. The Commission plans for all elections to be successfully concluded and for the will of the people to prevail.

“The Commission will continue to work with the National Assembly and all stakeholders for the establishment of the Electoral Offences Commission and Tribunal recommended by the Uwais Committee on Electoral Reforms (2008), the Lemu Committee on post-election violence (2011) and, most recently, the Ken Nnamani Committee on constitutional and electoral reform (2017).

“At the moment, INEC is saddled with the responsibility of prosecuting electoral offenders. We have drawn public attention to our constraint in this regard. We have no capacity to arrest offenders and conduct investigation without which successful prosecution is impossible”, he said.

Yakubu lamented the role being played by politicians, whom he said are sponsors of the thugs who disrupt and circumvent elections, citing instances where many cases preferred against those arrested in the act of disrupting elections or perpetrating violent were either caused to fail or the subjects standing trials bailed out.

“Over the years, we have worked closely with the Nigeria Police. Since 2015 we have received a total of 149 case files, including 16 cases arising from the 2019 General Election. The cases are prosecuted in the States where the alleged offences were committed. Unlike pre-election and post-election cases, there is no timeframe for the prosecution of electoral offenders.

“A case may go on for several years. Some of the cases were dismissed for want of diligent prosecution while in some States the Attorneys-General entered nolle prosequi to get the alleged offenders off the hook.

“Even where the Commission recorded the most successful prosecution of electoral offenders following the violence witnessed in the Minjibir State Assembly bye-election in Kano State in 2016, it is unclear how many of the 40 offenders sentenced to prison with the option of fine actually spent time in jail. The fine was paid presumably by their sponsors. That is why we believe that the Electoral Offences Commission and Tribunal will dispense justice dispassionately and speedily in the same way that the Electoral Court deals with violators in other countries such as South Africa.

“We also hope that the security agencies will get to the root of all violations and support the Commission to prosecute not just the thugs that terrorise voters and INEC officials, snatch election materials at polling units and collation centres, but their sponsors as well”, he said.

On the status of the Smart Card Reader device, the INEC boss said the use of the device has come to stay, emphasizing the need for the National Assembly to protect its status by ensuring it has a legal backing.

“One critical area that the Commission will engage the National Assembly is the status of the Smart Card Reader (SCR). Let me reiterate that the SCR has come to stay. It cannot be jettisoned or abandoned. Rather, the Commission will seek ways by which its utility in elections can be enhanced for the triple objectives of verification of the genuineness of the Permanent Voters’ Cards (PVCs), confirmation of ownership and fingerprint authentication of voters.

“The status of the SCR must be provided for and protected by law. Similarly, accreditation data from the SCR should be used to determine over-voting and the margin of lead principle. The judgement of the Supreme Court on the primacy of the voters’ register as the determinant of over-voting in law merely draws attention to the lacuna in the electoral legal framework which must be addressed through immediate and appropriate amendment to the Electoral Act.

“The Commission will present a proposal to the National Assembly on this matter as well as other areas in which further deployment of technology will deepen the integrity of our electoral process,” he said.